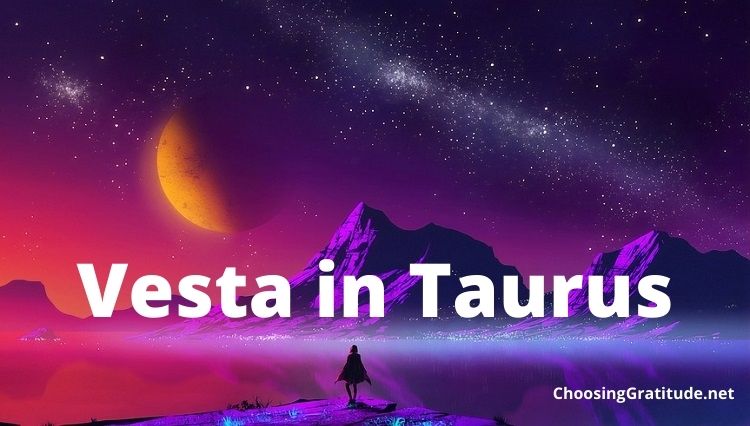 Some might agree that skimming through your daily horoscope with your morning coffee and a piece of toast is entertaining.

A daily chart can help us discover our mood for the day, while weekly can predict some health issues or relationship problems that we might face.

And while our natal charts need a more thorough investigation than just knowing your sign, it is extraordinary to measure planets and stars to understand our destiny.

But these celestial bodies are not the only variables that could impact our day-to-day life.

You are familiar with the Sun, Moon, and planets and how they influence our past, present, and future.

But other than the ones mentioned, our galaxy has thousands of asteroids and meteors that astrologers can pick apart of the energies they hold and their importance in our astrological profiles.

Among them, only four Major asteroids are in focus when determining impact on our life and destiny – Juno, Chiron, Ceres, and Vesta, our topic for today.

Discovered by the German astronomer Heinrich Wilhelm Matthias Olbers in March 1807, Vesta is considered the brightest asteroid in the sky.

Gauss, symbolically, named it Vesta after the Roman goddess of the hearth, home, family, and bakers.

As an asteroid, Vesta is the second most massive body in the Main asteroid belt, only after the dwarf planet Ceres, located in the region between Mars and Jupiter.

It accounts for an estimated nine percent of the total matter of the belt, both in mass and volume.

It has a spherical shape, separated into crust, a layer of silicate rock between the crust and the outer core, known as the mantle, and core, much like Earth.

Vesta was initially thought to be a fragment of some larger celestial body until it was discovered in the Virgo constellation as the fourth asteroid to be designated.

Since it is the brightest asteroid, Vesta is visible from Earth and faintly visible to the naked eye.

It has a higher density than most asteroids, and the surface area is slightly under 350,000 square miles – about the size of Pakistan, Tanzania, and Venezuela.

Even though it is under constant examination by NASA, the last exploration was in 2011, when the Dawn spacecraft spent a year exploring the orbit of Vesta for valuable information about the asteroid.

Named after a virginal Roman goddess of the hearth, home, and family life, Vesta was said to be a beautiful woman who caught the attention of various gods.

An almost war broke out between gods Neptune and Apollo to win the hand of Vesta, but Jupiter stopped it just in time.

She did not want to get married, so she requested Jupiter to remain an eternal virgin.

Vesta was granted her wish, so she focused on her gifts of keeping the home and tending the fire.

She was a popular deity with great power over domestic tranquility and a strict code of celibacy.

Often referred to as “Mother,” Vesta was recognized as the purest of Roman deities, adapted from the Greek goddess Hestia. Her Greek equivalent was the first-born child of the Titans Rhea and Cronus and sister to Demeter, Hades, Hera, Poseidon, and Zeus.

Vesta was respected as the carrier of the fire that was essential in the upkeep of a home.

The fireplace is the centralized area in Roman mythology where families would gather to prepare meals and offer sacrifices.

She had a special relationship with women during her time, who were the only ones with access to Vesta’s temple in the Roman Forum.

As a patron of millers and bakers, her symbol was a donkey, which was responsible for the functioning of a water mill by turning the millstone.

Vesta is represented as a quintessential model of a virgin, but she was much more than that. She also serves the desire to focus on the home and the family.

It is fitting for Vesta to be the brightest asteroid in the sky because its astrology equivalent is called that “little light” inside all of us that makes us unique.

Her energy appears through sacrifice and commitment to the greater good.

As a keeper of the spiritual flame, Vesta is a symbol of the sacred feminine creative energy that allows women everywhere to dedicate themselves to the utmost good for their beings.

It allows women to dream and set goals they believe in but also grants enough strength to fulfill spiritual practices and sacred beliefs.

Concerning sex, Vesta can indicate celibacy in the consensus society, but it also modifies sexual energy into the energy of the higher order.

Instead of focusing your life on mere pleasures, the Vesta in you inspires you with the desire to have a different calling, a higher service.

If you have Vesta in your natal chart, your relationship with others could have various meanings, depending on your focus.

Vesta acts differently in each zodiac sign, bringing out the best or the worst from us, depending on your point of view.

It indicates our devotion to someone or something, no matter if that is a person, a cause, a project, or a belief that we might have.

As an influencing asteroid, Vesta could show us issues we have to deal with, areas where problems might arise, and the necessary endurance to fight for our goals.

But before that, it would be good to reconsider the characteristics of Taurus tied up with the influence of Vesta.

Taurus is the second astrological sign belonging to the earth element, represented by the bull constellation.

Like the bull that represents them, those born between April 20 and May 20 are dependable, intelligent, and stubborn.

But there is much more to their character.

Taureans love consistency in their lives and are considered the anchor of the zodiac.

They find comfort in stability and honesty, where their hard work is appreciated. If you try to deceive them in any way, that could be the last time they talk to you.

Taureans are the only ones not worrying when everything seems to fall apart.

They enjoy simple things in life while being logical and grounded. But they can be characterized as homebodies who do not like grand changes.

Slow to change and stubborn, Taureans could dismiss criticism as they tend to have a challenging task listening to other people.

They are not fond of authority but tend to excel in business matters as they have a firm-set nature.

Taureans are huge perfectionists who find comfort in their repetitive days set to achieve their goals, and once they set their goals, they dedicate themselves to whatever matters in life.

Taureans are easy to get along with as long as you do not break their comfortable routine, which can sometimes be considered lazy.

But they provide a sense of duty, responsibility, and reliability that people from their circle can lean on.

If you are lucky to have Vesta in Taurus, you can boast about your devotion to anything meaningful.

People with any alignment of Vesta are organized, detailed, practical, and good planners.

But their good traits overlap with being steady and stable, ideal for their families and partners.

Taurus natives can be reliable in their ways of thinking and working, and you can always expect a relationship on a similar note with them.

They indeed love comfort, but they love to treat people around them the same way.

They wish to see their efforts materialized to be satisfied, staying determined until reaching their goal.

If you are a risk-taker, Taureans are the complete opposite. Keeping the status quo is essential to their well-being, as they tend to ignore changes and whatever comes with them.

Just like Vesta kept her promise to stay honest to her calling, Taureans find their success after hard labor to be pleasurable, so this notion is what maintains their drive to continue.

But they tend to lose themselves after experiencing failure.

Focusing on the bigger picture rather than looking at the details, Taureans can have a challenging period adapting to changes.

In contrast to the Roman goddess, Taureans with Vesta are highly sexual and wish to have that aspect of their life fulfilled no matter what.

Their stubbornness comes to light here, as their emotional side does not let them be in the wrong.

Woman with Vesta in Taurus

Women with Vesta in Taurus keep the proclaimed characteristics.

They are traditional in the sense of family values to respect, meticulous and hard-working in every aspect of their life, and determined in setting and reaching their life goals.

Nothing is left to the game of chance, as female Taureans make sure to plan to details.

But if things go opposite their plan, they can encounter a mental block since changes can postpone their movement forward.

They take after goddess Vesta who always stuck to her principles.

Contrary to Vesta’s code of celibacy, Taurus women are passionate and find s*x and relationship to be of paramount priority.

They must find a profound connection with someone before fulfilling their needs.

Taurus women need to feel safe and loved first. The real magic of love starts after that.

Branded as lazy and comfortable signs, Taureans are persistent if something is crucial to them. They cannot be easily discouraged, even though many have tried.

Their negative trait is proven multiple times, and Taurus women are terrified of change.

Change is sometimes unexpected, unproven, and untested, and they do not deal well with unfamiliar territory.

This block is something that often stops them from fulfilling their full potential. But Taureans are unstoppable once this doubt is gone.

The idea of success is exciting enough to fuel their energy and desire, and we can all learn something from their drive and loyalty.

Man with Vesta in Taurus

Not many changes regarding men with Vesta in Taurus are lost, as they keep the same principles and qualities as women.

They are hard-working individuals who feel comfortable in their way of thinking and doing.

Along with this, Taureans are practical and take their time before deciding anything.

Unlike Taureans Natives, men with Vesta in their astrological placements like to consider the details, as any change can derail their plans and determination.

Sacrificing their physical needs is possible if that means they can achieve some higher cause.

Vesta is prominent more in men than women, even though they share similarities because they tend to stick to their beliefs and duty more often.

It is crucial to avoid changes and keep the status quo, even though this might seem not fulfilling your true wishes and dreams.

But this is not of importance as their goals lay somewhere else.

Taurus men are willing to sacrifice their needs for others as good businessmen and passionate lovers.

However, they might be at risk of neglecting their desires in the chase for professional success or a higher cause familiar only to them.

They do not let challenges weigh them down, as each taken step is calculated with knife-like precision.

They are not easily discouraged, and their confidence to succeed makes them unique.

Vesta Taureans are hard-working and dedicated people inspired by seeing the tangible results of their work and efforts.

The zest of the Roman goddess is visible in their ways of thinking and sticking to their principles.

They are guided to achieve their goals without competing with anyone else.

But these individuals know their qualities and how to bring only the best out of them.

Even with their negative traits, they do not tend to rub them in anyone’s face, as they live a perfect balance.

Ultimately, these natives are driven to success, comfortable once they find their niche, and loyal to the people around them, especially their goals and beliefs – traits to admire.