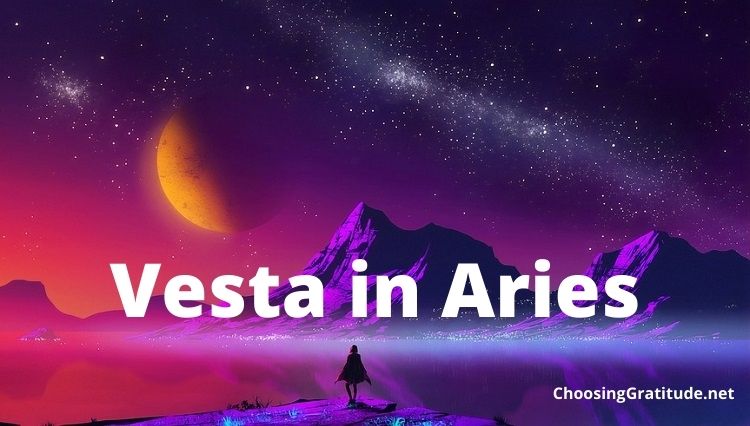 The asteroid Vesta was discovered in 1807.

It is the fourth asteroid ever discovered and the second heaviest.

Vesta has two giant craters possibly created through billions of years of collisions.

Some meteorites from these collisions are even found on the surface of Earth.

This asteroid is also the brightest asteroid that can be seen from Earth.

Vesta was named after the ancient Roman goddess Vesta, ruler of home and family life.

Vesta was the protector of Romans as well and one of the most important goddesses in Roman pantheon.

Vesta was rarely represented as human.

Most commonly, the symbol of Vesta was the burning fire in the Vesta temple.

This was a temple placed in the Roman forum, where only the Vestal virgins were allowed.

The Vestal virgins were her priestesses.

Men were not allowed inside Vesta’s temple.

Women entered this temple once a year during her holiday, Vestalia.

The priestesses, Vestal virgins, or Vestals were obliged to maintain the sacred fire of Vesta burning non-stop because the continuous fire meant protection of Rome from harm.

Romans believed that if the fire would have been extinguished, something horrible would have happened to Rome.

The Vestals who neglected their duties were severely punished.

It was considered a great honor to be chosen a Vestal priestess even though it meant seclusion of the woman from the world for a long period of her youth, up to her middle age, which in those times was a great sacrifice that usually meant this woman would remain unmarried and without children.

The Vestals also needed to commit to remain virgins at least 30 years after they had been appointed the role of priestess.

They were granted their freedom after this time.

The goddess Vesta was the purest god among all. She also was a virgin, hence the duty that was given to her priestesses.

Vesta was also the goddess of fertility. Women who had problems conceiving a child prayed to this goddess to help them fulfil their dreams of becoming a mother.

The Vestal virgins had some rituals they preformed for a good harvest as well as to help women enhance their fertility.

In astrological sense, Vesta depicts our way of dealing with issues at work.

It also describes the level of our integrity and our capability to sacrifice for a cause or for someone.

It can also describe our devotion to somebody or something, that is, how devoted we can be to a cause, or a project, a goal, etc.

This asteroid reveals how relaxed we feel regarding personal relationships and being intimate with someone.

Vesta rules the issues caused by a lack, or fear of intimacy, or by refraining from intimacy.

Vesta also shows how we deal with our passion and our physical needs; do we tend to ignore them, or we express them openly and satisfy them.

The possible issues related to Vesta can be discovered by analyzing the house and sign of its placement.

By analyzing Vesta we can discover the people that might be causing us problems that we need to remove from our lives.

This asteroid shows where to focus our attention. It also shows the areas where we feel suppressed and restricted.

It also shows areas where it is necessary to make sacrifices for a cause or for someone. This sacrifice is required for a higher purpose.

Vesta also points out the areas where we might be ignoring some issues or ignoring dealing with them.

Usually these are areas where we don’t manage to be successful despite the fact that these areas are of great significance to us.

This asteroid help us persevere and maintain our focus on our goals, solving the issues that come our way.

The sign of Aries gives a powerful character, especially to sun signs.

Aries people are very ambitious and usually very confident people, unless there are some other influences in the chart which neutralize this trait.

Their nature is dominant and usually not very tolerant.

The ruler of Aries is the planet Mars, mythological god of war.

This explains their forever readiness to fight and quarrel with others.

They always need to have things their own way.

These people don’t think much about the consequences of their actions, which is why they are often in unwanted situations and cleaning the mess they have caused.

They might be prone to see provocation where there actually isn’t one.

Recklessness and thoughtlessness are their common traits.

Many of these people don’t think a second before going into action, especially if they are for some reason agitated.

This behavior, of course, often backlashes at them.

These people are open-minded and direct.

They don’t have much patience and will speak openly what is on their mind.

Many people would call them rude and ill-mannered.

It is true that they are not very polished and polite, which is especially bad for women influenced by Aries.

There isn’t malice in these people. Their intentions aren’t bad.

They are simply very direct and don’t think much about possibly hurting someone’s feelings.

They expect you to be equally direct towards them.

If you don’t speak your mind and talk behind their back, they will find you weak and chances are they wouldn’t want to hang around you much.

They never talk behind people’s back. You won’t need to wonder about their opinion regarding yourself.

These people are dignified and love helping others.

Their reactions are fast, and they don’t hesitate to give their hand to those in need.

Their advantage is their bravery.

These people aren’t afraid of anything and anyone, which is why they are excellent in situations where quick action is required to save lives.

They are quick and determined.

These people love winning, but they will gladly congratulate their opponents on their victory.

Aries people have a very passionate nature, and usually both women and men have a need for a lot of intimacy.

Their sensuality is rough, and they are perceived as very attractive.

These people have optimistic and joyful nature. They don’t get discouraged easily.

Aries are impulsive and always active. They are the most likely of all signs to take risks.

When they have a goal in mind they don’t stop until they reach it. Obstacles are only inspiring them to continue fighting.

People with Vesta in Aries are very loyal and devoted.

These people are trusted friends and companions, and they openly offer their help and support.

They are willing to put in their efforts and even sacrifice for a higher good. For them it would be like losing their dignity if they refused putting themselves out towards helping someone.

It is easy for these people to sacrifice and do things for others.

This stems from their helpful and kind nature, but also from their exaggerated ego.

Vesta in Aries is not good at loosing. They cannot accept not being the best and are ready to put in as much effort as necessary to succeed.

They cannot accept failure at all costs. For them, the battle is never lost.

This attitude is usually a good thing, but in many cases, it can be detrimental, bringing them a victory with a sour aftertaste.

These people are not modest, but quite the opposite.

They like to brag about their achievements and try to find their role in every situation.

Usually they are very passionate and seek intimate pleasures.

If Vesta is well placed within the natal chart, they will openly express and pursue their desires for intimacy, which in turn won’t make them feel suppressed.

If Vesta is badly placed, this can lead to suppressing a desire for intimacy, feelings of shame and guilt regarding intimacy, having an unsatisfactory intimate life, and in worst cases, being prone to all kinds of distorted behavior in this area.

Badly placed Vesta in Aries might cause the person to ignore their issues with intimacy, causing great psychological issues and problems in life in general.

Of course, during every analysis of the natal chart it is important to take all facts into consideration.

Woman with Vesta placed in Aries

Women with Vesta in Aries are open minded and direct. They are not a typical quiet woman.

This is a woman with an attitude and can sometimes be overwhelming for those who prefer someone with a bit toned-down personality.

Vesta in Aries gives this woman an attractive appearance and behavior.

They are not hesitant to approach the person they like.

They are not shy at all. For some with a bit puritan outlook on relationships, this woman might appear very liberal.

Those who prefer adventure and intense emotions will get along quite well with her.

If Vesta is afflicted in her chart, and combined with some other afflictions, this could lead to issues related to her intimacy.

She might feel constrained to express her intimate side and in extreme cases, avoid such relationships completely.

She is righteous and isn’t hesitant to help those in need, especially her loved ones.

When this woman has some goal in mind she doesn’t stop until that goal is accomplished.

To people who prefer calm and soft-spoken girls, this woman can appear rude and ill-mannered.

This unfortunately can be true in some cases.

Usually it is the loudness of her character that makes her appear rude, but in fact, they are completely the opposite.

She is honest and straightforward. This woman doesn’t plot against your back.

She will tell you what is on her mind even if it means your feelings might get hurt. She usually doesn’t have bad intentions she is just blunt.

Man with Vesta placed in Aries

A man with this placement of Vesta has similar character to a woman with Vesta in Aries.

This is a strong personality and usually very communicative and open.

This man is very passionate and has a strong drive for intimacy.

Some men with this placement can be quite promiscuous, providing this is confirmed with some other placements in their natal chart.

This man can be very direct when voicing his opinion up to a point of appearing aggressive.

He might also be aggressive and not very concerned about the consequences of his actions.

He might be somewhat stubborn, following the principle “my way or the highway”, and he might be difficult to compromise with.

This man just like a woman with this placement isn’t a bad person. He is dominant and wants to succeed in all his endeavors.

He is willing to put in all the necessary effort and obstacles never discourage him.

If Vesta is afflicted this man might experience issues with intimacy or self-sacrifice.

He might be in a position where he needs to give up on something important for the sake of something or someone else.

Experiencing something like that can psychologically damage him and that is why it is important to do work on releasing the trauma these situations might have caused him.

Many of these people tend to repress these feelings which cause even greater harm.

This man is loyal and devoted friend and very reliable.

Vesta in Aries is a strong placement. It makes the person direct and open about their opinion.

People with this placement are very passionate and prone to seek intimate pleasures.

They don’t hesitate to put their lives at risk to give someone in need their help.

It is important not to ignore the possible issues they have with repressing their emotions and desires because this can harm them emotionally.

They are leader types and do whatever it takes to succeed in their goals.

Because of their blunt approach people might find them rude.