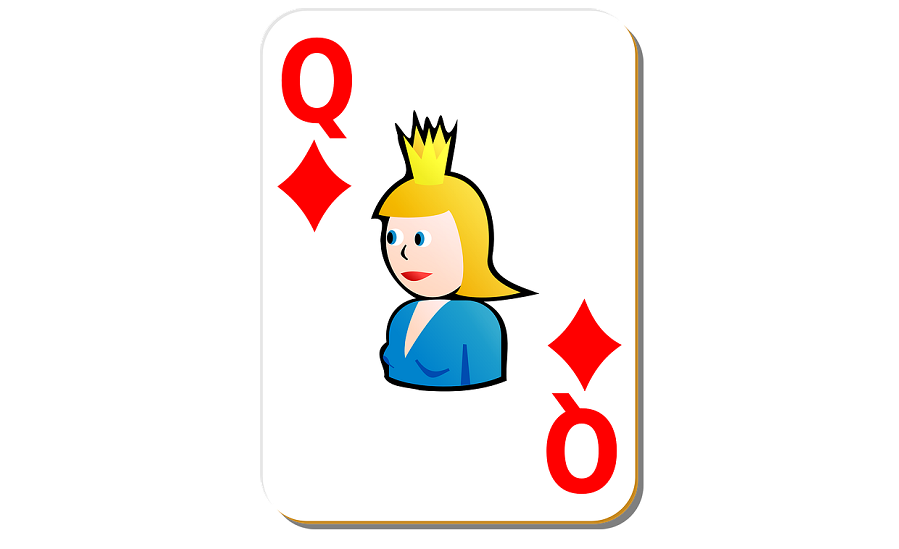 It is not known who created cards and when they were first created, but according to some existing evidence, this most likely happened in China in the 10th century.

It took cards several centuries to come to Europe, and this most likely happened by the end of 13th and start of the 14th century.

Italy and Spain were European countries where they were first brought by merchants.

At first, not many people were able to obtain them because they were an item of luxury.

A lot of time and money was required to create a deck of cards, mostly because they were hand-painted and had richly decorations.

When their production became cheaper, cards begun spreading across Europe and later around the world.

Sometimes this suit indicates luck with money and sometimes struggles regarding money.

People who have the diamonds as their suit are usually oriented towards their finances and ensuring their increase.

They love financial stability and put in effort to earn enough to be able to provide it for themselves and those they care about.

For these people sometimes their sense of personal value is equaled with their material status, which can be dangerous.

They need to work on building their confidence and self-worth basing it on their inner value and abilities, and not on the fact of how much money they have in the bank and the success they have achieved.

The Queen of diamonds symbolizes establishing financial security at any cost.

This card symbolizes fears and worries about money and often problems earning money.

It is a card of luxury and desire to possess it.

People influenced by this card often spend beyond their means jeopardizing their financial security.

Queen of diamonds is often a sign of indecisiveness and insecurity regarding money and financial decision.

Queen of Diamonds people possess strong nature and are authoritative.

They are also cooperative, intuitive, and receptive.

They are focused to giving others and many of them are humanitarians that devote their lives to this cause.

This often happens in the later phases of their life, after they have learned their important lessons regarding money and finances.

They often have artistic abilities; they might have talent for painting, writing, poetry, music, etc.

They are good at whatever they do and can earn a lot of money doing what they love.

They might struggle with issues such as confidence and self-esteem.

They often value themselves by the money they earn and success they achieve.

Some of them don’t feel enough even when they have earned more than they can spend in a lifetime.

These are issues they need to work on so they can lead a satisfying life.

Some of these people have a domineering nature.

They might behave in a controlling and domineering manner.

Their character is strong, and people might perceive them as overly strict and bossy.

Queen of diamonds people are focused on providing themselves and their family wellbeing, and this can cause a lot of stress to them which causes them to overreact and sometimes hurt others.

These people are wise and often follow a path of spirituality, but usually not before they learn the major life lessons about money.

After having transformational experiences that teach them the right values in life, these people begin to focus on their other priorities.

Sometimes Queen of Diamonds have indecisive nature and cannot decide where to focus their attention.

They have many interests and often their energy is dispersed on way too many things, preventing them from finishing any of them.

Many of them change jobs frequently trying to discover which one suits them the most.

There is a group of Queen of Diamonds people who have many fears regarding their finances.

They are afraid of making any changes and risks regarding their income source, and they also tend to save money as much as possible because they leave in fear that there won’t be enough money.

Their fears prevent them from using their full potential because they tend to stick to a job that feels safe, even though it doesn’t pay much, and it isn’t their soul’s choice.

It is greatly important for them to work on overcoming these fears and building their confidence in their abilities to succeed and find a better paid job that will also fulfil their other needs and not just their financial needs.

In most cases, Queen of Diamonds people have a generous nature, even those who have money fears and are prone to saving every penny.

They love to be of help to their friends and family and are often in a position to take care of them.

Some of them might sacrifice important things in life for the sake of their loved ones.

Many of Queen of diamonds people spend a big part of their lives before experiencing some major revelations about the values in their life and stop focusing all their attention to money and instead devoting their time to personal development and care of their loved ones.

This is when things fall into place, and their finances only begin increasing, despite the fear which many of these people have.

When they take their focus of the money, the difficulties and issues they’ve been facing usually stop, and money starts flowing in.

Their love life isn’t always happy. In fact, they often experience disappointments, multiple marriages, staying in unhappy marriages, changing partners, and not being able to establish a stable and satisfying union with someone.

Their lives are often filled with obstacles and challenges they need to overcome, as well as major life lessons they need to learn through their experiences.

Fortunately, their strong and determined nature helps them go through these difficulties with relative ease.

They only make them stronger.

These people are direct and openly speak their opinion.

They aren’t afraid to tell the truth even when it hurts.

Others might find them judgmental and overly harsh, but most people value their sincerity.

They see them as someone reliable whose opinion is worth considering.

They help people face their fears and insecurities or admit their mistakes and apologize or start all over again.

Their intentions are noble, and they only try to help even though it sometimes appears as they are judging or reprimanding.

As we mentioned before, money is a weak spot throughout their lives.

Some Queen of diamonds have a weakness of overspending and putting their security into jeopardy.

Their need for luxury and in some cases for showing off, forces them to spend even the money they don’t have, just to keep appearance.

This is usually a case when they are younger, and with time they overcome this need because they realize how superficial it is.

For some, lessons never seem to reach them, and they never stop chasing money and prestige.

Some end up financially ruining themselves.

The fact about these people is that they have an excellent taste, and they only want quality.

Quality always costs, but they need to learn how to balance their need for buying expensive things and remaining secure.

Their nature is nurturing, and this role suits them well.

Queen of diamonds people feel good when they are able to help someone.

Their bad trait is a tendency to criticism and negativity.

If things don’t work out as they planned, they might easily become aggressive or depressed.

Some of them struggle with pessimism and are unable to have an optimistic outlook on life.

Queen of Diamonds Card in Tarot and Cartomancy

In tarot and cartomancy, the Queen of diamonds represents a person of authority and someone powerful.

It usually represents a woman with such qualities, but sometimes a man can be represented by this card.

This card represents someone with negative and forceful personality.

It might be someone who imposes herself and her opinion on others.

For many readers, the Queen of diamonds is a bad sign and could represent a toxic person that is somehow intruding the client’s life.

In love readings, this might be the client’s rival.

This person is usually someone wealthy and well-off.

It might be someone who is in a position of authority and of high status.

Sometimes this can refer to a person who is close to the client and might be their relative or friend.

The Queen of diamonds in a spread can indicate speculations and earning money using some controversial means.

The Queen of diamonds card can also be a sign of a successful and capable woman who is both great professionally but also in her private life, as a mother and wife.

This card might indicate that the client is in this role or needs to embody such a role in their life.

For stay at home moms who want to begin working and focusing on their career as well, this card appearing in their reading might be a sign that their life will soon change.

This might indicate getting a job and beginning to earn money, which will also contribute to their sense of independence because they won’t be relying on others anymore.

Sometimes, when this card appears in a reading, it can indicate material rewards for the work and effort, and job well-done.

It might indicate financial security and stability the person has provided for themselves.

The Queen of diamonds in a reading can be a sign of someone who is a wealthy, older, motherly figure that can help the client in different ways, mostly financially.

This might be someone who will appear in the client’s life offering their help to overcome the difficulties they are facing.

In some cases, this card might indicate the client being in this role, taking care and helping someone, and sometimes this card can indicate the need to take care of themselves.

Also, the Queen of diamonds can sometimes indicate being overwhelmed with daily duties at home and work.

The person should delegate their duties and take some time off to nurture themselves.