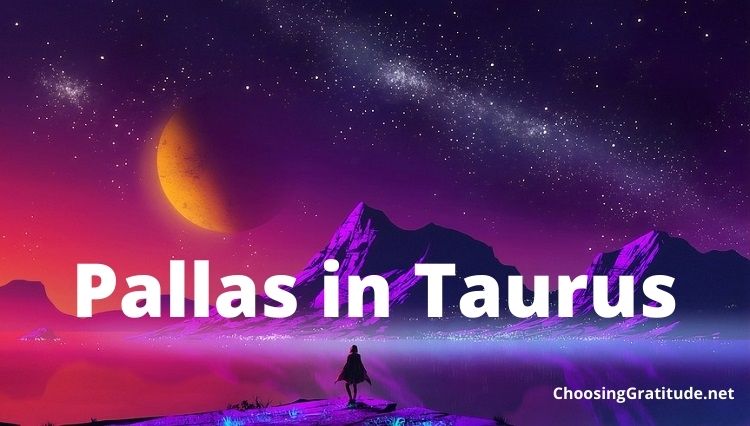 Pallas is an asteroid, a celestial body in the inner Solar System reaching a size from 1 up to 1000 km in diameter.

This asteroid was discovered in 1802 and it was then the second ever discovered asteroid.

This asteroid carries one of the alternate names of the Greek goddess Athens, Pallas Athena.

Athena was the daughter of Zeus who was the supreme deity in the Greek gods pantheon.

Athena was also the goddess protector of the Greek town Athens.

She added it after the tragic event in which her good friend, nymph Pallas had lost her life due to apparently Athena’s accidentally killing her during one of their games.

Athena was the main goddess of war and wisdom in ancient Greek.

In astrology, Pallas rules creative abilities, especially the ability to creatively express your personality, as well as our creative endeavors.

This asteroid also rules wisdom and intellect in general. Pallas is the healer asteroid and by analyzing it we can discover whether the person has some healing powers.

Pallas shows how capable we are to nurture and take care of others, and whether we possess such qualities or not.

Asteroid Pallas in the natal chart reveals our ability to control our urges by using discernment, wisdom, reasoning, and our intellect.

This asteroid also shows our will and determination to succeed in fulfilling our desires and reveals how prepared we are to fight for our beliefs and our rights.

In the chart of a woman, Pallas reveals the nature of relationship she has with her father.

Especially in women’s charts, but in natal charts in general this asteroid represents men and their role in our lives.

This asteroid shows how much we trust the men in our life.

It can reveal whether we instinctively trust them, or we doubt their motives.

Pallas as the ruler of intellect and wisdom shows the level of wisdom we possess and describes the way we approach solving our problems or achieving our goals.

Pallas shows our level of wisdom and the ability we have to make the correct choices and strategy to fulfil our goals and lead the life we want.

In general, people with prominent Pallas (conjunct Sun, Moon, Ascendant) and well placed within the natal chart, usually have organized and precise personalities.

These people prefer to make detailed plans before they take any action.

They also don’t have hasty reactions but usually think well before they take any action or react in certain situations.

They use their wisdom and often their intuition to make sure they avoid any violence and possible conflicts.

This asteroid also gives people the gift of creativity.

Pallas is often highlighted in the charts of talented artists and people who love arts or do some creative job.

Usually these people di work in some creative or artistic area, such as photography, painting, design, sculpture, movies, architecture, etc.

Also, Pallas gives the gift of diplomacy and for some talent for politics.

When Pallas is badly placed in the natal chart this can be a sign of lack of tact and conflicting personality.

This asteroid can sometimes give a person healing powers, usually through the use of mind and its power to heal oneself and others.

The person might use meditation, visualizations, healing with light and sound, affirmations, mind control, hypnosis, or some other healing techniques.

Men with prominent but afflicted Pallas, might be prone to exhibiting passive and weak behavior, and dependency. These men often possess feminine traits.

Opposite to men, women with afflicted Pallas are prone to aggressive behavior, outbursts of anger and bullying people.

They are very competitive, especially with men, and might exhibit masculine traits and be perceived as very masculine.

Taurus is an earth sign, and is ruled by the planet Venus, the planet of pleasure, love, and beauty.

People born under the influence of Taurus sign are prone to indulging in beautiful things, good food, nice surroundings, and sensual pleasures.

Financial security matters a lot to these people, and they need to be financially secure to be able to relax and live their life with peace.

If they don’t have enough money, they feel depressed and anxious.

Being influenced by the planet Venus, these people usually have a nice appearance, and many of them are considered quite beautiful.

For them it is of great importance to live in a beautiful and comfortable environment.

They are usually creative and enjoy decorating their home.

They don’t need much money for that, just their good taste.

These people love luxury and work to provide it for themselves.

They are ready to work hard to achieve such a lifestyle.

They invest wisely in their future, and they always have enough for “rainy days”.

When they feel secure enough and well-provided, they allow themselves to indulge in the things they enjoy.

They love things of quality and rather spend more on quality items they will use for years.

These people would never jeopardize their security and future for their pleasures.

Many Taurus people love to eat, and they can overindulge in food, which can sometimes cause them weight issues.

They are responsible, reliable, well-organized, and very tidy people.

They are devoted and loyal friends. As partners they are also loyal and devoted to their loved one.

Their ideal life is creating a future together with their spouse and children.

Pallas in Taurus if prominently placed in the natal chart, gives the person creative abilities.

These people preferably express their creativity in the sphere of beautifying spaces, especially their homes.

Many of these people are art lovers and enjoy decorating both themselves and their living space.

Many of them are very talented and chose some artistic career.

They often have a great sense of personal style that many people admire.

They are able to dress well without always breaking the budget because of their eye for quality which doesn’t always need to cost much.

Many of them prefer the comfort of their home to going out which is why they need to make sure it is a place where they and their loved ones can feel relaxed and enjoy.

People influenced by Pallas in Taurus have a calm and measured personality.

They aren’t easily provoked, and they tend to have all facts in consideration before making a move or even talking about something.

They always think about the consequences of their actions before making any moves.

To others they might appear very organized and calculated.

They are simply cautious and avoid conflicts if possible.

They prefer leading a calm life minding their business.

These people never rush into things, and they rarely lose their temper and react aggressively.

They have excellent self-control and are able to control their urges.

They are intelligent and thoughtful people.

They have a nurturing and caring nature, which especially expresses itself through providing food and comfort to those they love.

They are excellent hosts and people love being in their company, which is usually in the comfort of their homes.

These people have a lot of stamina and are able to endure a lot to fulfil their goals. They don’t ever give up.

Woman with Pallas placed in Taurus

Women with Pallas in Taurus are often good looking and take great care of themselves and their appearance.

They have excellent taste in clothes, and they know how dress to impress others. People look up to them and copy their style.

These women use these traits as part of their personal charm.

They are determined and don’t easily give up on their dreams.

They are responsible and reliable and don’t rush into situations before thinking through the possible consequences.

They prefer men who have serious and measured personalities.

These men should preferably be situated and can provide them the stability they need in life.

These women prefer traditional type of men who are the head of family and father of the household.

They are very feminine in nature and prefer masculine men.

They want men who are leaders, and they happily give this role in their relationship.

Usually their father had this role in their family during their childhood and they consider this role natural.

Their nature is nurturing and they enjoy taking care of people, especially their family and loved ones.

In general, these women are family oriented and prefer spending their time in the comfort of their homes alongside their children and their man.

If Pallas is afflicted in the chart these women might have issues with men in their lives.

This might refer to men acting aggressively towards them, disrespecting them, or in some other way violating their integrity.

Man with Pallas placed in Taurus

Men with Pallas in Taurus are measured and well-organized personalities, especially if other factors point that in their natal charts.

They have a diplomatic nature and usually are good at finding solutions to people’s disagreements.

They are thoughtful and think about their future.

These people are good providers and focused on providing enough for their future stability and the security of their loved ones.

Obstacles don’t easily discourage them because they have a strong and determined personality.

They avoid fights and conflicts but, if necessary, they can defend their interests at all costs.

They don’t attack first but know how to defend themselves.

With their father they have a relationship of respect and often look up to them.

They often grow in a traditional family with traditional male-female roles which gives them the pattern for their own life in the future.

They are creative and artistic. They have great taste in clothing and usually dress well.

They are usually good looking and attractive.

Their idea of nurture is providing good food and comfort to those in need, especially the ones they care about.

Pallas in Taurus in a prominent position in the natal chart gives the person artistic abilities.

They have talent for decoration and creating beauty.

These people are calm and avoid conflicts at any cost.

If provoked, they react accordingly defending their rights.

They are very intelligent and measured, and don’t react before thinking through every detail.

They have a caring and nurturing nature eager to provide for others, especially their loved ones.