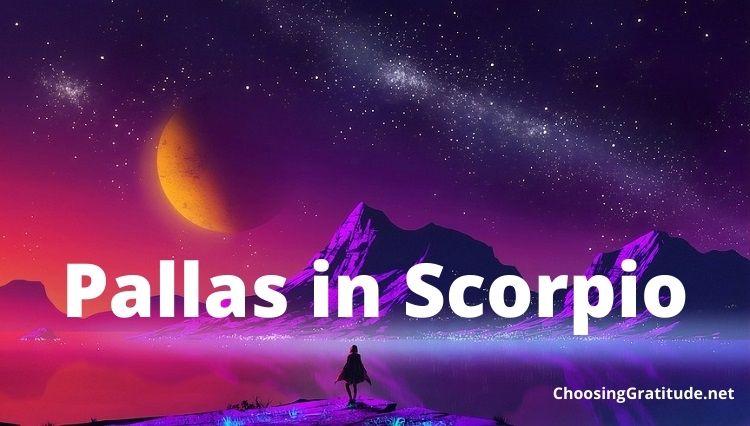 According to mythology, Pallas came to this world by splitting her father’s head open.

But that’s not the only intriguing fact about her birth.

Pallas was also born as an adult and already wearing armor.

That was the first sign of her captivating presence and impressive skills.

As a goddess of artisans, wisdom, war, poetry, and crafts, Pallas had an intense character and strong will.

Since Jupiter considered her his favorite daughter, she was loyal to him, regardless of circumstances and challenges.

Unlike her brother Mars (Ares in Greek mythology), Pallas wasn’t ferocious and bloodthirsty.

Instead of violent and courageous battles, she preferred skilled manipulation, stellar strategies, and cutting-edge weaponry.

Because of that, Pallas is linked to defense, while Mars is associated with the offense.

She possessed controlled strength that allowed her to make well-thought-out decisions and get the best outcomes.

But that isn’t to say Mars and Pallas were enemies.

Instead, they were polar opposites, each representing specific virtues and traits.

Undoubtedly, Pallas was brilliant and a stellar negotiator.

As a result, she was the woman in a man’s world.

What Pallas represents in Astrology?

Since Pallas was an excellent strategist and a composed warrior, she is the opposite of the typical male gods and fighters in mythology.

Thanks to that, she represents femininity in male natal charts.

She also stands for one’s ability to negotiate and win a fight without forcing someone to lose.

Moreover, she represents influential female figures in our lives and teaches us to be powerful but wise and giving.

Pallas stands for our willingness to fight for underdogs and help others achieve their goals or overcome adversities.

The placement of this asteroid shows whether we allow insignificant details and emotions to cloud our judgment and ruin the odds of reaching our objectives.

People born with the Sun sign in Scorpio are resilient, spiritual, and emotional.

They are mysterious and can spend hours thinking about the most profound and complex subjects, such as the meaning of life, death, and karma.

Some might perceive these natives as dark and hard to understand.

But they don’t feel comfortable with everyone and have a carefully selected circle of friends.

These natives are typically shy and might not feel at ease in large crowds and around strangers.

They prefer an intimate atmosphere and being with those they know well.

Moreover, these individuals don’t open up to people quickly.

They need time to relax and assess whether they can trust someone.

These natives let into their lives only those who pass their tests and show they’re trustworthy.

They prefer to be alone than in the company of people who don’t wish them well and would abandon them in difficult moments.

Thus, these individuals are loyal, and once they commit to someone, they stay for a lifetime.

But they also expect the same from their loved ones.

These natives might come across as possessive due to having high expectations in a relationship.

They believe that one needs to put effort into a connection and continue fighting even after the initial passion is gone.

However, these individuals are passionate and highly sexual beings.

They seek a partner who matches their expectations and standards and enjoys physical intimacy as much as they do.

These natives are creative, emotional, and dedicated.

That also manifests in their behavior in the bedroom.

These individuals want to satisfy their partners and focus on understanding their love language.

Thus, they’re imaginative and enjoy spicing things up to ensure routine and boredom never allow the distance to settle between them and their loves.

Although these natives enjoy the romantic areas of their lives, they can dedicate themselves equally to their jobs.

They are hardworking and prefer professions that require analysis and creativity but leave enough room for a healthy work-life balance.

These individuals are also interested in psychoanalysis, occultism, and mysticism.

The unknown attracts them, and they often take risks because they enjoy challenging their fate.

People born with Pallas in Scorpio are intelligent, wise, and sensitive. It’s hard to hide anything from them.

These individuals see things through and recognize when someone is lying to them.

They look for subtle cues and have excellent intuition.

Hardly any other Zodiac sign is as intuitive as Scorpio, making this placement stellar for detecting fake people and misconceptions.

As a result, it’s nearly impossible to hide anything from these natives.

They can smell a lie and aren’t afraid of calling people out and exposing their ill intentions.

These individuals loathe dishonesty, and it’s likely the one thing they would never forgive.

As soon as these natives notice others act odd or might be misguiding someone, they become defensive and call things for what they are.

It is almost as if they can read other people’s feelings and thoughts.

Regardless of how they feel, these individuals never let their guard down.

Thanks to that, they can identify whether something is going in the wrong way.

These natives often protect themselves from deceptions and ill-intentioned people with their perfect sixth sense and gut feelings.

Moreover, they can read between the lines, which helps them assess whether their friends and lovers are genuine.

Nothing escapes the attention of these insightful natives.

They go straight to the core of a problem and aim to solve it quickly.

Even though others may think they are secretive and hold back their opinions, that’s far from true.

Instead, these individuals think well before speaking and never reveal their viewpoints and strategies unless they know they can trust someone.

Their most significant strength is their knowledge of the complexity of human personalities.

However, these natives also tend to focus on an issue and not let it go until they find a suitable solution.

They must have a clear mind and consciousness to think of other things in their lives.

But these individuals rarely rely on others for help and look for solutions inward.

Nothing excites them as releasing negative energy and embracing new beginnings.

These natives are also prone to withdrawing into solitude and taking time to be on their own, reflect on their feelings, and make the best decision possible.

They can also lure others into following their viewpoints and preferences due to being hypnotic and persuasive.

These individuals have an alluring and mysterious vibe that makes them almost irresistible. Even their enemies find it hard to go against them.

One would say that’s manipulative, and it might be true. But these natives don’t manipulate intentionally.

Thus, it is not their only trait. There’s much more to these individuals.

They are an ideal match for high-responsibility roles and would be suitable candidates for government jobs requiring confidentiality and covertness.

However, these individuals should perform jobs that contribute to the greater good.

They also love solving mysteries and exploring the unknown. Puzzles, riddles, and secrets are their forte, and they will have fun trying to solve them.

Moreover, they are excellent at solving financial problems and helping others overcome their economic struggles.

These individuals typically have stellar math skills and think fast.

They are got negotiators and can find the middle ground to every issue.

Other people would benefit from having them on their side during discussions.

These natives never give up and always seek a solution, even if something seems impossible to solve.

Besides, those born with this placement are relentless at work and often impress others with their work ethic and determination.

They rarely allow anyone to take them out of their tact and cause them to lose control.

These individuals are composed even under pressure.

Even when it seems they no longer have any advantage, they can think of a way to come on top and win in a discussion.

After all, these natives have impressive strategies and can identify their opponent’s weaknesses.

But that isn’t to say they are ruthless and cold-blooded.

When these individuals love someone, they will give everything they have to make them happy.

Here are the similarities and differences between men and women born with Pallas in Scorpio.

Women with Pallas in Scorpio

Pallas Scorpio women are enigmatic. Others will find it hard to read her thoughts and behaviors as they can be beyond cryptic.

These women enjoy being mysterious, but it also comes naturally to them.

They don’t play pretend; they are unique and loathe anything that feels fake.

As a result, these women may find it impossible to understand and predict their behavior.

That often makes people respect them and fear them simultaneously.

The puzzling behavior of these women is attractive and compelling.

People feel an urge to know them better and understand what’s behind their intentions and feelings.

They are also hard-to-beat opponents. These mystical women can confuse those around them and make them doubt themselves.

They take the time their enemies are perplexed to confound them even more and ensure they have leverage.

These women enjoy cat-and-mouse play and often perceive those weaker than them as entertainment.

They can be controlling and enjoy winning discussions and debates.

Moreover, these women think fast and can come up with solutions to challenging problems within seconds.

They are detailed and never let anything distract them.

But these women are also unforgettable lovers and often use their physical touch and attention to make people fall in love with them.

Men with Pallas in Scorpio

Pallas Scorpio men are passionate and dedicated to their partners’ pleasure.

But they have the same approach to everything in life – they protect their loved ones, beliefs, and possessions and give all of them to make others feel good.

However, these men are also stubborn, and it’s often their way or the highway.

It’s nearly impossible to change their minds and make them see the other way.

As a result, these men are prone to maintaining the status quo.

They can also be controlling and obsessive, especially if they fail to keep their impulses in check.

If these men see someone as their enemy, they will find relevant information and use it against them.

Others may perceive them as vindictive and cold.

But contrary to popular belief, these men are not that focused on revenge and prefer to let karma take care of it.

Like their female counterparts, these men are enigmatic, and it’s hard to imagine what they’re plotting.

Nevertheless, they can change the world and make it a better place if they want.

But these men are also rebellious and loathe taking orders from others.

People born with Pallas in Scorpio are mystery others often enjoy solving.

Yet, it’s probably impossible to ever tell with certainty what these individuals think and feel.

But they’re also loyal and make for excellent and caring partners.