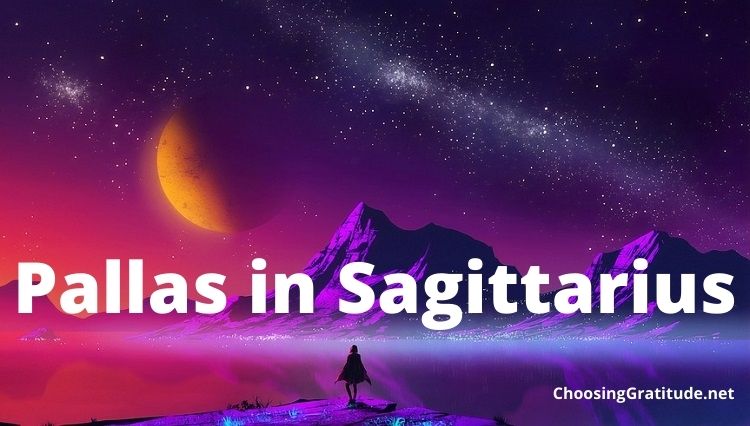 Asteroids are celestial bodies formed from debris left over from the times when the planets and the Solar system were created, around 4.6 billion years ago.

Some asteroids, like Ceres, are also considered minor planets.

Asteroids vary in size and usually range from 1 to 1000 meters in diameter.

Pallas is an asteroid discovered second to Ceres.

In myth, Pallas was a nymph from a lake in Northern Africa. This was also the second name of the Greek goddess of wisdom and war, Athena.

According to the myth, Athena and Pallas were friends, and due to unfortunate set of circumstances Athena killed her friend.

In memory of her, she took the name Pallas as her alternate name.

Athena was an important goddess in the Greek pantheon of gods, being the daughter of the supreme deity, Zeus.

In Roman mythology Athena’s counterpart was the goddess, Minerva.

The goddess Athena Pallas was the protector of the Greek city of Athens.

By analysing it in the natal chart we can discover the possible areas where the person will tend to creatively express their individuality.

With Athena Pallas being the goddess of wisdom, this asteroid also rules our intellect and wisdom.

This asteroid also rules our nurturing abilities and can show whether we are a caring type and how well we care about others. It also shows the way we are likely to take care of and nurture others.

Pallas shows the person’s relationship with their father, especially in the natal charts of women.

This asteroid symbolizes men in our life and can describe the relationships with men both in women’s and men’s charts.

It reveals whether we instinctively trust or distrust men and their motives.

This asteroid can also show how ready we are to protect our rights and fight for what we believe it’s ours and matters to us.

Pallas’s influence is not visible in every person’s chart.

Only those whose Pallas is prominently placed, for example in conjunctions or oppositions with personal planets or angles, can strongly notice its influence.

It can show whether we approach wisely to resolving our issues and achieving our goals and plans.

This asteroid can reveal whether we make thoughtful decisions about our life, especially the important matters.

Those whose Pallas is prominently placed in the natal chart usually have organized personalities and think through their actions and decisions.

They don’t like to rush into things and always think before they act.

Caution is important for them, and they like to take their time before deciding on something major.

They are never haste and use their intellect and wisdom to avoid unpleasant situations in life and conflicts.

They are usually very diplomatic and are excellent mediators.

When Pallas is afflicted in the natal chart, this can cause the person to lack tact and diplomacy and get into conflicts often.

This might make the person prone to anger outbursts and competitive behaviour, especially with men. They might cause a fight without much reason.

Pallas rules creativity, and it is often specially positioned in the natal charts of creative and artistic people.

These people often do some creative job or have creative hobbies.

They love the arts, especially design, sculpture, and architecture.

In men’s charts when Pallas is afflicted, this can cause them to express feminine qualities, passive behaviour and have co-dependency issues.

Pallas is also considered the healer asteroid and it can also describe whether we possess healing abilities.

If Pallas is prominent in the chart this can indicate healing powers, and using them to help others, often using mental power.

They don’t like pressure of any kind and love their freedom more than anything.

They have a great sense of humour and can be very straightforward.

Their direct approach might sometimes be perceived as rude, especially by people who are not as open about their opinions like they are.

One thing is certain, their intentions are never bad.

They are not malicious they just have a child like approach to expressing their opinions.

They could use a bit of self-control though because they might offend someone that they care about a lot.

A fortunate thing is that they are very difficult to stay angry at them. They are simply adorable.

Both men and women have a passionate nature, and they are very active.

They cannot stand still for a long time, and they need to keep themselves occupied.

These people cannot stand any kind of constraints because they love their freedom more than anything.

When they feel their freedom is threatened, they simply walk away.

They cannot be manipulated into doing anything they don’t want.

They do what they want when they want and with whom they want.

When we say they are active, this is not an exaggeration. They need to keep moving, physically, all the time.

If they don’t travel, they walk or they run. This are their favourite physical activities.

Adventure is what makes them excited, and they love to explore new places and people.

Sagittarius is not a faithful sign in general. They love the excitement of newness, and this includes their partners.

Of course, when they find the person who matches their qualities and desires, they can be loyal and devoted for a long time if not a lifetime.

Their major quality is their honesty and openness even though other people might find them too honest at times.

They are also born optimists and don’t let circumstances get them down.

They can be a bit gloomy when things become rough, but they turn back to their old joyful selves in no time.

Sagittarius is a philosopher and even when they don’t seem like that, they are very deep and meaningful beings.

They might appear shallow, but they are in fact very emersed in exploring spiritual matters and meanings of life.

These people are always prepared for an adventure and will be ready for another one in no time.

They love the company of other people but like doing things on their own.

They are capable to stand you up if something better comes along.

Sagittarius people are usually good looking with a muscular built.

They are attractive and easily get attention. They are fun to be around and very flirty.

They are very direct in their speech and are not very diplomatic.

This can make them problems with other people because they lack the tolerance and tact to accept their way of thinking.

They are very curious and love to learn and experience new things.

They are attracted by foreign cultures, and they love traveling and exploring them.

These people are creative and love the arts, especially from far away countries.

They feel inspired by everything out of the ordinary and exotic.

Their relationship with men is open and based on trust.

They are confident and are more masculine types. Even women tend to express masculine traits.

Even though they appear quick and thoughtless, these people think well before they make major life decisions.

They respect their life and their freedom and interests very much and they make sure nothing, and no one jeopardizes them.

For them it is important to do things they enjoy doing, and this attitude makes it difficult to compromise with others, which is usually necessary for relationships to work out.

They are not very organized and can be a bit irresponsible.

Because of their charming personality most people tolerate these traits.

They are loyal and devoted friends.

These people are often talented healers who use mental healing to heal their patients.

They can create mental images of their patients healed and somehow that image turns into reality making the patient healthy again.

They can be very religious and sometimes even be a religious leader or a guru.

Woman with Pallas placed in Sagittarius

Women with Pallas in Sagittarius have an open and honest relationship with their father, and generally all men in their life.

These women love their freedom and love activities that broaden their knowledge and horizons.

They are very direct, sometimes brutally honest, and might appear a bit of a tomboy.

They are very active and prefer activities usually related to men.

They are optimistic and don’t let negative emotions stay in them for a long time.

Looking at the brighter side of things and finding the good thing in a bad situation is the way they manage to get out of difficult situations.

These women are not very organized and not the most reliable, but they never have a bad intention and people always forgive them for their mistakes.

These women are not very emotional and usually not very faithful.

Man with Pallas placed in Sagittarius

Men with Pallas in Sagittarius are straightforward and open about their opinions.

They don’t pay much attention to what other people think about them, and they don’t care much about the consequences of their actions.

They are not very flexible, telling the truth how they see it is more important to them than the possible damage their words will cause.

These men are philosophical and often deeply spiritual.

They look for higher truths and shallow people don’t interest them.

They have a friendly relationship with everyone, but they don’t let anyone involve in their business.

If they don’t like something or someone, they will tell that openly.

It is amazing how honest these men can be.

They are very active and into sports.

They are usually good looking and flirty, and their charm is what gets them everywhere and lets them get away with many things.

People, especially women tend to forgive them for their often rude behaviour.

They love to explore, and their freedom is their most valued possession.

Pallas in Sagittarius makes the person who is influenced by this asteroid very open minded and honest.

They are very direct and speak their mind openly even if that means offending someone.

They love their freedom and love to expand their horizons and knowledge.

Many of them are very spiritual and possess great spiritual knowledge.

They love meeting people and are a loyal friend, which isn’t always true in their romantic affairs.