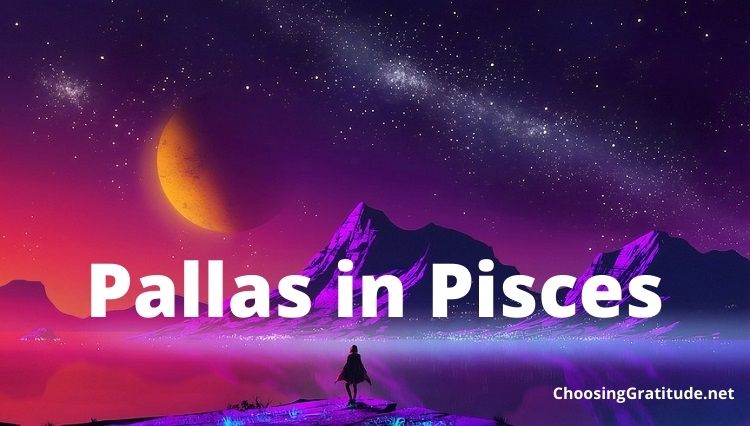 Pallas is an asteroid, a celestial body created from remnants that are left over from the period of the early formation of the solar system dating back to 4.6 billion years ago.

They are also called minor planets and can reach from 1 meter to 1000 meter in diameter.

Pallas was the second discovered asteroid.

Pallas was the name of the Greek goddess of war and wisdom, but also handcraft.

Athena was the daughter of god Zeus, which was the supreme deity in the Greek pantheon of gods.

Athena’s counterpart in Roman mythology was the goddess Minerva.

Pallas was her epithet given to Athena as her alternate name.

According to myth, Pallas was actually a nymph from the lake Tritonis in Northern Africa.

Athena and Pallas were good friends, but due to unfortunate circumstances Athena killed Pallas during one their games.

As a sign of respect to Pallas, Athena added her name to her name.

Athena-Pallas was also the protector of the city of Athens.

In astrology, the asteroid Pallas rules our creativity and ability to creatively express ourselves, as well as our creative endeavors.

Pallas also has the rulership of wisdom and intellect. This is the healer asteroid, and by analyzing its placement in the natal chart we can discover whether someone has healing abilities.

In the natal chart Pallas symbolizes the men in our life, which is especially true for women’s charts.

This asteroid describes our level of trust in men. It can show whether we instinctively trust their motives, or we doubt their intentions.

Pallas asteroid also shows our readiness to fight for our rights and our beliefs.

It shows whether we have a wise approach to achieving our plans and goals.

It shows our wisdom and ability to make discerned choices and decisions about important matters in life.

People with well placed and somehow prominent Pallas (in aspects with ruling planets, Ascendant, Sun, Moon), are usually very organized and love to make detailed plans before they undertake some action.

These people are cautious and love to take their time and think before making a decision or taking some action.

Their decisions are never rash, and they use their wisdom to avoid conflicts.

Because it is the ruler of creativity and arts, Pallas is usually prominent in the chats of very creative people who are talented or fond of arts.

They often do something creative for their living, or they at least have some creative hobby.

These people are often into some creative work such as painting, design, architecture, movies, sculpture, etc.

People with prominent Pallas are very diplomatic and they have a great gift for resolving conflicts between people.

If Pallas is afflicted in the natal chart, this can make the person lacking diplomatic skills and tact, and this might be someone prone to outbursts of anger and conflicts.

Afflicted Pallas can make the person aggressive and prone to fighting without much cause.

Often women with afflicted Pallas are prone to expressing masculine traits, such as aggressiveness and violence.

They might be prone to conflicts, and competing, especially with men.

On the contrary, men with such placements can express feminine qualities, co-dependency, and general passive behavior.

People with strongly placed Pallas can possess healing abilities, usually expressed through the use of the power of their mind.

These people are also easily healed through the use of such techniques.

The sign of Pisces belongs to the group of water signs, which rule our emotional side and our emotions.

Its ruler, Neptune, gives people influenced by this sign a note of mystery and elusiveness.

These people are multilayered personalities and might appear naïve and sometimes shallow on the surface, but actually possess depth of character, and are very intelligent.

Because they often appear naïve, people might try to take advantage of them.

They are usually very surprised with Pisces demonstration of wit. They are not easily manipulated for sure.

They can be prone to daydreaming and possess a vivid imagination.

These people are often very creative and artistic and are able to express their personality through their art.

Pisces are often very intuitive and many of them possess psychic skills.

Majority of these people are gentle and kind souls. They are also very sensitive and nurturing.

Some Pisces can be overly emotional which causes lack of stability.

They might be prone to hide away from reality which can sometimes be too difficult for them to bare. Pisces are prone to different kinds of escapism.

This in turn makes them prone to various addictions, especially drinking and drugs.

They also don’t like conflicts and are prone to avoid them at any cost by pretending the issues don’t exist.

They are usually very spiritual beings and unexplainably connected to other realms of existence.

Pallas placement in Pisces makes the person very compassionate towards the needs of others.

Pallas is the healer asteroid, and prominently placed in the natal chart can give the person healing abilities.

These people can be manipulative and secretive about their motives.

They are skilled diplomats which can hide their intentions well and attain their desired result.

They aren’t an open book for sure; quite the contrary, these people seem elusive and hard to understand.

They can be very manipulative and able to achieve incredible goals using others as their puppets.

People often consider them naïve and not very bright, which is their greatest asset and tool they use to get where they want to be.

These people are highly intelligent and wise. Their wisdom appears as if from another world.

They are highly intuitive and many of them are able to easily attune to the frequencies of higher realms of existence from where their knowledge stems.

When they use their special powers for “light”, they can achieve incredible goals in helping people and serving humanity.

These people can be highly spiritual with inner knowing of how things function in the Universe.

Many of them choose the path of spirituality and some become spiritual teachers and healers and serve humanity in this way.

Depending on the placement of Pallas in their chart, these people can either be very organized and precise, or they can be completely disoriented and “lost in space”.

Usually, their intentions are pure and focused on serving and helping others, especially those they care about.

These people are generally very empathetic and emotional, and they would do anything to protect their loved ones.

They are generally selfless and enjoy helping others as well.

In some cases, their intentions might not be genuine and masked behind a false mask of kindness and willingness to help.

They can be very deceptive and hiding their true goals, saying, and doing one thing, while in fact, they want something complete opposite.

Some of them are master manipulators, and people give them things and do things for them without realizing that they are doing it against their will.

They are masters of convincing others that something is their idea, while they are the real puppet masters behind the scenes.

The other version of someone born with this Pallas placement is a person full of compassion and care for the world.

Some of them are so kind and gentle beings that they find it hard to withstand the cruelty of this world.

They are focused on doing good to everyone, and often choose a career in service, both to people, but also to God. They can be very religious.

Some might possess strong psychic abilities which they can use to predict the future and help others by doing that.

They are nurturing and caring souls, capable of great sacrifices for those they love.

They can be very artistic and creative, capable of making great works of art.

Woman with Pallas placed in Pisces

Women with Pallas in Pisces are usually caring and giving beings, which enjoy taking care of others.

Especially to those they love they can be very protective and prepared for great sacrifices for their benefit.

Their father and men in their life are usually their idols.

She loves male authority and enjoys her feminine role.

Typical representative of a woman with this Pallas placement is a girly woman who enjoys being at her man’s side feeling secure and protected.

This type is very appealing to men with typical masculine traits.

Some of these women can be very manipulative and deceptive.

They can be prone to cheating and doing things behind people’s back to get what they want.

They might be a bit disorganized and not good at planning.

They can also be bad with finances, and they need someone to advise them on their spending.

Man with Pallas placed in Pisces

Men with Pallas in Pisces is a shrewd and wise character, but this isn’t always very obvious to the people that don’t know well.

This man can be a great actor, pretending and putting a mask on to get what he wants.

Deception and lies are not strange to many of these people, and they use them to their benefit. They are also great at it.

Not every man with Pallas in Pisces is like this. Some are quite naïve and kind souls and others whom others try to take advantage of.

These people are focused on the benefit of others and are capable of great sacrifices for their loved ones. Nothing is too difficult for them to make people happy.

They are selfless in helping others and they don’t focus their help only to those they know and care about.

These people are helping everyone in need, and often choose some profession where they can be of service to others.

They often lack organizational skills and can be a bit disoriented and confused when it comes to organizing their life.

Some of them might be excellent diplomats because of their abilities to hide their true intentions.

They are able to convince people and even masses in their beliefs and make them follow their guidance.

Another type of this man can be quite the contrary, easily manipulated, and weak.

As fathers and people of authority these people can be weak and indecisive.

They might be unreliable and not a good role model for their children and subordinates.

They are usually good at following authorities, but some types might be rebellious and trying their best to avoid following the rules.

Pallas in Pisces makes the person protective and kind, and often very naïve.

These people enjoy helping others, especially their loved ones.

They are not afraid of making sacrifices for those they care about.

They have an empathetic character, and they often choose a profession which somehow involves helping and serving others.

They love doing good deeds and they usually do them without expecting anything in return.

They usually lack organizational skills, and they can be confused and disoriented at times.

Even though most of them are wonderful human beings capable of doing great things for others and humanity, some of them might be quite the opposite.

Some of these people have deceptive nature, prone to wearing masks and hiding their true motives.

They can be very manipulative and use their intelligence to make people do what they want.

These people can have many faces and others cannot easily discern their true motives.

This is what makes them dangerous opponents.

Because of their deceptive nature people can perceive them as naïve and underestimate their abilities.

This is what eventually causes them to fall prey to these skilled manipulators.

In general these people are good at following authorities, but some of them would do anything to avoid following rules.

Their intelligence is high, but they don’t often use its full potential.