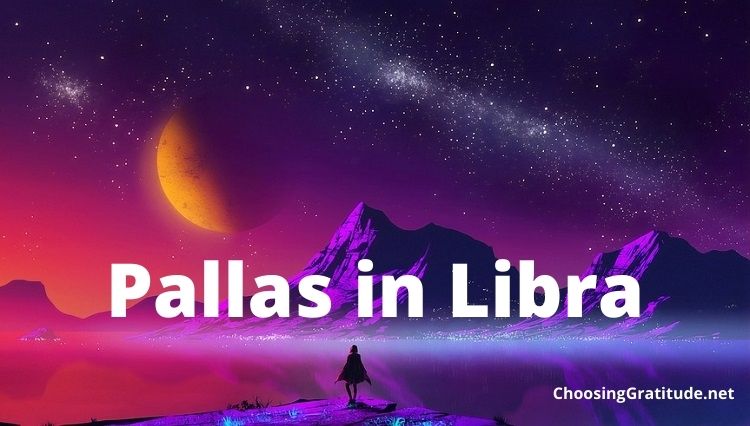 There’s more to astrology than what most horoscope readers assume.

Your natal chart can tell you much more about yourself if you dive beneath the surface and discover the less-known aspects.

However, most people are familiar with the Sun, Moon, and ascendant and rarely go beyond that.

That is also why many consider astrology a scam and don’t bother to understand whether only reading daily horoscopes has anything to do with it.

But those have been corrupted by modern media, aiming to attract readers with simplified, short, and engaging content.

That’s why daily horoscopes will rarely hold any truth to them and will rely on cold reading techniques.

If you want reliable and credible astrology, discover the more specific and less-talked-about elements of your natal chart. For instance, you can start with asteroids.

Pallas, the embodiment of wisdom and warrior-like spirit, is a stellar starting point.

This is the aspect that gives insights into your approach to strategic thinking, intelligence, and cerebral achievements.

Many Greek mythological characters share the name Pallas, which might be confusing if you’re unfamiliar with its rich and creative world.

Thus, many warriors, fighters, and soldiers in Greek mythology were called Pallas.

However, the daughter of Triton, the sea God, is the Pallas most people have heard about.

She was Amphitrite’s and Poseidon’s granddaughter, even though some other legends may ascribe her as a daughter of another sea god.

According to many of today’s scholars, Pallas was originally from Libya. But there’s no myth of Pallas without the myth of Athena.

Athena is Zeus’s daughter and was born after splitting his head open. Triton took her as his protege, meaning that Athena and Pallas grew up together and became tight-knit friends.

They both loved competitive combat and martial arts. These two goddesses weren’t your regular mythological women – they played with shields and spears and were never submissive and silent.

According to one legend, Athens accidentally stabbed Pallas during a friendly play, leaving her mourning her best friend’s death forever.

But another myth says that this was not a fair match, and that Zeus used his flashy aegis to distract Pallas.

Even though Athena didn’t want to kill her, she used a killing bow by accident.

Again, Athena never forgot Pallas and felt guilt and regret for the rest of her life.

But she swore that her best friend would never be forgotten.

As a result, Athena took Pallas’s name, which is why many know her as Pallas Athena.

Pallas was also the inspiration for the name of the second asteroid humans discovered. German astronomer Heinrich Wilhelm Olbers spotted it on March 28, 1802, in Bremen.

Despite having a mineral composition, Pallas is significantly less hydrated than Ceres.

According to researchers from the USA, this asteroid is massive enough to form a planet but lacks matter due to becoming frozen over time.

Pallas has a relatively eccentric orbit, making it challenging for human spacecraft to reach it.

So far, we haven’t visited it, and all proposals to finally accomplish it have been ineffective.

Here’s how Pallas’s characteristics and background translate to her portrayal in astrology.

Since Pallas Athena never needed a man to make her strong or significant in mythology, she’s the embodiment of mental power and unyielding self-respect.

When diving into individual natal charts, this aspect stands for the creative use of cerebral activity, wisdom, and understanding of the world.

However, Pallas is also associated with culture, arts, and crafts.

That means its position in someone’s birth chart says much about their higher wisdom and where they source their creative intelligence.

This asteroid also plays a significant role in our ability to spot patterns, understand the larger picture, and unlock our problem-solving skills.

Because of that, it’s primarily connected to learning ability, teaching, and willingness to discover new things.

Hence, Pallas shines out our inner genius and taps into our curiosity.

Even though this aspect can give brilliant individuals, it can also result in black-and-white attitudes and know-it-all personalities.

Although Mercury has similarities, Pallas is more about pattern recognition, blending intuition with intellect, and creatively expressing knowledge.

Here’s how that manifest in the chatty Zodiac sign of Libra.

Those born during the Libra reign are charismatic individuals who ooze positive energy and attraction.

Others typically enjoy their presence and love to have them around.

Libras are often artistic types and appreciate anything aesthetic.

They vibe well with people who can have a profound conversation and talk for hours.

But Libras also take care of themselves and must look top-notch.

Pallas in Libra – Meaning and Traits

Pallas in Libra is indeed an intriguing placement. These individuals aim for intellectual harmony and always consider both sides of a deal.

They never decide anything without previously delving into all possible outcomes.

However, Pallas in Libra natives often gravitate toward the fairest solution in decision-making.

They’re stellar at identifying other people’s emotions but rarely mix theirs with reasoning.

Even though these natives are as impartial as they can be, they tend to repress their own needs and viewpoints to comply with the group.

They understand balance and believe it’s their duty to contribute to it.

Moreover, these individuals are skilled at detecting social patterns and using these insights to their advantage.

The opposite typically results in individuals struggling with problem-solving and intellectual equilibrium.

People with Pallas in Libra are usually talented in various forms of art.

They understand what makes it harmonious and how to find the best approach.

But these natives can also be talented in more technical niches and be interested in natural sciences.

They are also involved in social activism and may come across as social warriors, even if only on the internet.

These individuals dream of an egalitarian society and uphold high and inclusive principles.

They resonate the most with just and communicative people who are unyielding about their values.

People with Pallas in Libra seek ways to fight for equity and improve the world.

However, they may also like to brag about it and show themselves as more caring and socially involved than others.

Ultimately, these individuals loathe fights and conflicts. They seek peace and rarely provoke others.

Even when these natives find themselves in altercations, they stay composed and look for the most satisfying solution for everyone.

They put themselves in the referee position and aim to bring fights to a halt.

Woman with Pallas in Libra

A woman with Pallas in Libra is tactful, refined, and imaginative. She despises conflict and acts as a mediator when people fight.

But this woman is also sensitive to other people’s emotions and problems. Because of that, she does everything she can to not upset or hurt them.

Moreover, a woman with Pallas in Libra is respectful, kind, and gentle. She approaches everything thoughtfully and never resort to violence.

Instead, this woman solves discussions verbally and tries not to get too involved emotionally. She’s also a stellar communicator and effectively gets her point across.

This woman also enjoys sharing her wisdom to help others solve their problems and navigate life more lightly. She nurtures a balanced blend of emotional and intelligent strategy.

A woman with Pallas in Libra loathes injustice and can’t stand aside if witnessing one.

Sometimes her sole presence is enough to silence the tensions because she is charming.

This woman is also honest and open about her opinions.

However, she cares about being liked and might succumb to group thinking under pressure.

Others love that this woman is supportive and rarely gets annoyed. She will rarely explode and act impulsively, allowing her to nurture lasting connections with people.

Thus, this woman has an idealistic perspective on life and sees the best in people.

She gives everyone the benefit of the doubt and tries to always see the bright side in everything.

Man with Pallas in Libra

A man with Pallas in Libra resembles a prince charming who loves to act as a savior.

He’s approachable and has a warm and friendly personality, making it easy to feel comfortable in his presence.

This man often acts as a wise mediator and gets people to see things from other person’s perspectives.

But this man also hates discussions and does everything to prevent them.

However, if a conflict arises despite his effort, he will strive to solve it with calm and reasonable rhetoric.

Thus, he enjoys helping others and being around whenever someone needs him.

On the other hand, his composed and friendly attitude may even cause him trouble, as some people might think he doesn’t care.

Because of that, this man must ensure his calmness has a good streak of firmness to avoid the risk of his loved ones thinking he’s indifferent.

People born with Pallas in Libra are communicative and approachable individuals who enjoy being around others and sharing their knowledge.

They’re also creative and may succeed in various arts fields.

But others may try to use their goodness and willingness to help everyone.

Hence, these natives must protect themselves from ill intentions and be more careful, as not everyone wishes them well.