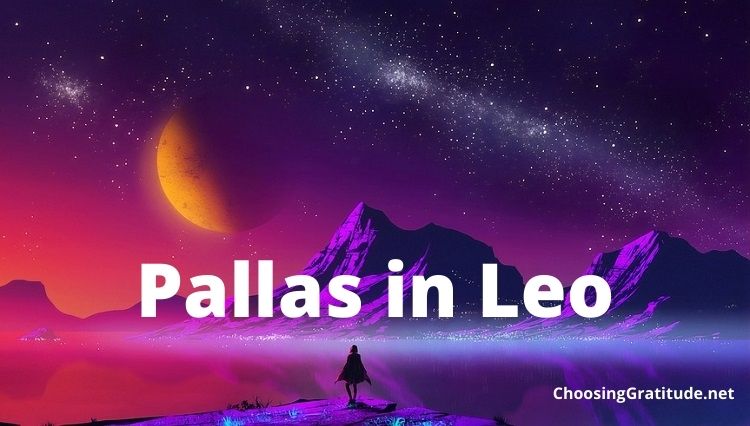 Pallas belongs to the group of celestial bodies called asteroids.

Asteroids are minor planets of the inner Solar System sizing from 1 m in diameter to 1000 km in diameter.

The name of this asteroid derives from the alternate name of the Greek goddess Athena – Pallas Athena, daughter of the supreme god, Zeus.

According to one of the existing myths, Pallas was a nymph that lived in lake Tritonis in Libya.

She was raised alongside goddess Athena who was a good friend of hers, and Athena apparently accidentally killed her during one of their child games.

In her memory, Athena added the name Pallas to her name.

Athena was the goddess of wisdom and war, and protector of the city of Athens.

Pallas is also the ruler of our wisdom and intellect. It is also considered the healer asteroid and can reveal our healing abilities.

It can reveal how able we are to take care of others, whether we possess a healing or nurturing qualities in our personality.

This asteroid shows how determined we are to succeed and fight for what we believe.

It shows how are able we are to control our nature and urges, using our reason, wisdom, and intellect.

In a chart, especially in a women’s chart shows the relationship with the person’s father.

Also in a natal chart, this asteroid represents the men in our lives, especially in women’s charts.

Pallas shows the level of trust we have in men that are in our life.

It can either show our instinctive trust in their motives or doubt and distrust.

Similarly to Athena Pallas, goddess of war, whose name it bears, the asteroid with this name placed in the natal chart reveals how ready we are to fight for our beliefs and our rights.

It is also the ruler of wisdom and describes how wise we approach to achieving our goals and plans.

It also reveals how wise we are in general and how able we are in creating a strategy to make the right choices and decisions in life.

Those who have a prominent and well placed Pallas, are usually organized, and make detailed plans before taking actions.

They are also known for taking their time before taking action or reacting.

These people usually don’t make rash decisions and they use their intelligence and wisdom to avoid possible conflicts and violence.

Pallas is also the ruler of creativity and arts and is prominent in the charts of talented people who love arts and crafts, and often do something creative for their living.

They are often into creative work like design, painting, movies, photography, architecture, sculpture, and similar.

Pallas gives good diplomatic skills to people, and in some cases great talent for politics and diplomacy.

If Pallas is badly placed in someone’s chart it usually gives lack of tact and diplomacy and a person prone to temper outbursts and conflict.

Some people with prominent Pallas also have healing abilities. We mentioned Pallas was the healer asteroid.

Usually the healing power includes the use of mind in the process of healing others and self.

People under the strong influence of asteroid Pallas are usually easily healed through these techniques.

Especially men with afflicted Pallas can become weak and express passive behavior and dependency, which are usually feminine traits.

On the contrary, women with such placements tend to exhibit aggressive and masculine traits and deny their femininity.

They might be prone to competitive behavior especially with men.

People with strong influence of this sign often appear a bit dramatic and exaggerated.

Many of them really believe they are kings and queens, hence the attitude.

These people are brave and possess strong character.

They are passionate and have strong will for life.

They enjoy being in the spotlight and love the luxury money can provide.

They are ready to go through great lengths to make the necessary amount to be able to provide themselves the life they desire and believe they deserve.

In a negative sense, they can be prone to overspending just for the sake of public display of wealth, even a fake one.

If this sign is well placed in the natal chart, they possess the traits of loyalty, generosity, selflessness, consistency, and readiness to help.

They are very dedicated to the people they love. They are usually supportive to their loved ones, but they don’t allow anyone coming in front of them.

They can be very egotistical which is one of their worst traits.

If their throne is jeopardized by anyone, they can become very competitive even if it means competing with their partners, friends, or siblings.

They possess mental and physical as well as emotional strength.

Leos are usually creative and have artistic skills.

Their creativity is expressed in true Leo manner, exaggerated and dramatical.

This placement creates people who are very talented.

Their creativity is focused on entertaining others, and they can be excellent creators in the field of movies and theater, but also design and photography.

Pallas in Leo placement loves to be in the spotlight and enjoys this place more than other people.

Being in the center of attention is natural for them.

This position makes the person direct and open about their desires.

They are not afraid to express their opinions and even debate to prove their point.

If badly placed, Pallas in Leo can make a person aggressively fighting for their rights and imposing their dominance on others.

They are often found in human rights activist groups fighting for the rights of oppressed.

They know how to fight for their goal and attract the attention to the masses on their goal.

When put into the service of good, their skills are incredible.

They will do anything to change the world for the better and will mobilize an army of followers that will help them succeed.

They can create fantastic work of arts and will expect to be publicly praised for that.

They do deserve the praise, but this can appear irritating to the humble creators who work in silence and for the sake of creating and not public accolades.

These people can be perceived as irritating because of the overwhelming nature of their creativity.

Many of them love creating publicly.

This placement of Leo is often found in natal charts of public speakers and politicians.

Their charisma is undeniable even though it can sometimes be hard to handle.

Woman with Pallas placed in Leo

Women with Pallas placement in Leo are usually charismatic and very direct.

They possess a contagious optimism and enthusiasm about life in general.

This woman will fight to prove she is right using all available means.

They don’t like to lose and every battle counts.

They often choose a career in public affairs. Their persuasive abilities are strong, and they use them as aid to help in achieving their goals.

These women love to talk, and love being heard.

This woman has a strong will and always has opinion on matters.

These women are very confident and believe nothing is impossible if they decide to achieve it.

They are very determined and organized and don’t live things to chance. Their actions are carefully planned.

If she chooses to express her personality through some form of art, her creations will be very expressive and dramatic.

Extravagant luxury on the verge of being “kitsch” is often how we can describe her art.

Man with Pallas placed in Leo

Men with Pallas placements in Leo are born leaders. They don’t let challenges discourage them.

This is a man full of passion and demonstrates it openly.

If they are convinced in something they are not afraid to fight with others to prove it.

They can appear forceful to some people who are not used to such a dramatic approach.

They can be dramatic and for some people can be overwhelming.

Pallas in Leo men are powerful leaders who are able to influence others with ease. They are excellent organizers.

The main things that ensure their success are their ultra-strong willpower and their ego. They cannot stand failing and being wrong.

Men with this placement are very brave and protective of their loved ones.

Those with good placement of Pallas in Leo are also protective of those who are somehow deprived of their rights.

Their charm is fascinating. They draw people in their circle with ease.

They are also excellent at dealing with stressful situations.

People enjoy being led by these men and they are often successful politicians and political leaders.

Pallas in Leo man is not afraid to confront people with their ideas and fight for them.

They are confident and reliable, and people instinctively know they can trust them.

Yes, they can appear demanding and commanding, but most people love to have a leader they can follow, because they don’t possess these qualities themselves.

They are a frightening opponent, so it is advisable not to make them your enemies.

Their family members know their value best. For the ones they love, these people are prepared to do whatever it takes.

Pallas in Leo is a powerful placement for this asteroid. It gives some great qualities.

People with Pallas in Leo are wise and have a dominant personality.

They are born leaders who aren’t afraid to fight for their beliefs.

They are loyal and generous, and very protective of those they care for.

It is not wise to have them as your enemy because they can be fierce opponents.

They often choose a creative profession, related to public affairs.

Their personality can be overly dramatic and overbearing, but it is all a part of their charm and charisma that most people are unable to resist easily.