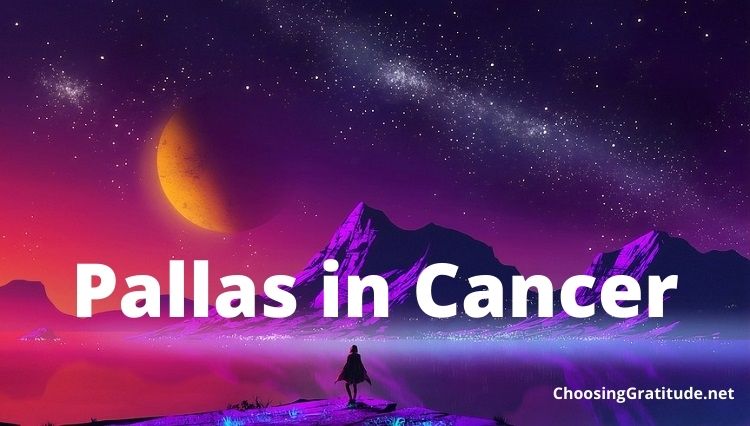 Asteroids are celestial objects, that are sometimes called minor planets.

These objects represent rocky remnants left from the times of early formation of our Solar system.

This happened long time ago, around 4.6 billion years ago.

There are over 1.1 million known asteroids today.

The first one discovered was the asteroid Ceres. Pallas was the second discovered asteroid.

Mythological Pallas was a nymph. This nymph lived in a lake in North Africa and was the good friend of the Greek goddess Athena.

Athena was the goddess of war and wisdom and was also the protector of the town Athens.

Athena played with her friend Pallas and due to a set of unfortunate circumstances she accidentally killed her.

Athena was one of the most powerful goddesses in Greek god pantheon, and she was also the daughter of God Zeus, who was the supreme god of the ancient Greek times.

In astrological sense, asteroid Pallas is the ruler of creativity and capability to creatively express ourselves.

It rules our creations and products of our talents and creativity.

It is the ruler of art and usually people who are into art and talented have a prominent Pallas in their chart.

These people often do some creative work for a living, like photography, design, etc.

Pallas also reveals our nurturing abilities, ability to take care of the people we love, but also other people.

Like the goddess Pallas Athena, this asteroid rules our intellect and wisdom. It can reveal how wise we are or how we approach to solving our problems and achieving goals in life.

It shows how strategic and organized we are in planning our future.

Those who have a well-positioned Pallas in their natal chart are very organized and plan ahead.

They are never hasty in their actions and decisions, and they make plans before taking action.

They take time before reacting and think the situation through.

It shows how determined we are to fight for our beliefs and our rights.

Pallas shows how able we are to control our unconscious urges through our wisdom and discernment.

It can also describe our relationships with men, especially in charts of women.

It shows the level of trust in men in our life, our instinctive trust or distrust.

Pallas shows our relationship with people in authority.

These people are diplomatic and often talented for politics and diplomacy.

If Pallas is in a challenging placement these people might lack tact of gift of diplomacy and have a tendency to be angry and react hastily.

Women with Pallas in challenging placement can be masculine and aggressive, prone to competing, especially with men.

Men with challenging Pallas might be feminine, passive, weak, and dependent.

Cancer is a water cardinal sign. People influenced by this sign are very emotional, but they are also selfish at the same time.

Many of them appear as they are only concerned about themselves and what they need, that they forget about their behavior and actions towards others.

They might be very hurtful without even realizing that.

Some of these people can best be described as spoiled brats, which they often are.

They give themselves the right to tell others what they think, and yet when it comes to receiving other people’s opinions and truths about themselves they immediately get offended.

Cancer is represented by the animal crab, which symbolically represents their behavior.

When they feel threatened, they retreat into their shell. This is similar to the behavior of human cancers.

They are usually not aware that their behavior can be hurtful to others because they are overly consumed with their feelings and thoughts.

These traits are often the cause of conflicts and ended relationships with people who aren’t prepared to tolerate their spoiled behavior.

Not all cancer people are like this, but that depends on the characteristics of their complete natal chart.

These people are home oriented and are protective of their loved ones.

They usually create their family early in life and are caring parents and spouses.

However, their children and spouses need to learn to live with their sulky nature.

They love being at home with their family, and often remain with their parents after they have created their own family.

Many of them never apologize to others because they cannot accept the fact that they can do anything wrong.

They are good with their money and prone to saving it for rainy days.

They can be very stingy and sometimes buy the cheapest things and food so they can save more.

This is why they always have money stashed aside.

Both men and women usually have a faithful nature. They are not very passionate either.

Some cancers have psychic and intuitive powers and can use them to help others.

They love to eat, and love preparing food which is why they often struggle with their weight.

They are also very creative, and often talented for arts, especially for painting and design.

They have a kind nature and are always prepared to help.

Despite their stinginess, they are usually generous and don’t hesitate to help both financially and otherwise.

They are born nurturers and enjoy taking care of others, especially their loved ones.

They are excellent at hosting parties for their family and friends and preparing wonderful meals for everyone to enjoy.

It takes a lot for them to gain trust but once they do begin trusting you, they can be your friend for life. You only need to accept their moody and sulky nature.

When Pallas is placed in the sign of Cancer, this makes the person very creative and artistic.

These people love to creatively express themselves and are often talented artists, who though they might not create to make a living, do it for their pleasure.

They have strong nurturing qualities. They enjoy taking care of others, especially preparing food for them.

They are also helpful and usually selflessly offer their help even to strangers.

These people love to spend time at their home.

They enjoy decorating their homes and making them a cozy place where they can rest and hide from the world which might be perceived as cruel and hurtful.

They are organized, especially with their money which they wisely spend to save as much as possible.

People love their welcoming nature, and they also enjoy welcoming their loved ones at home.

On the other hand, they aren’t prepared to accept they are wrong and almost never apologized.

This is not a placement that indicates determination to succeed.

If there aren’t some other placements that suggest otherwise, these people are often not prepared to fight for their goals, and if they don’t succeed at first, they usually give up soon.

In general their relationships with others can be difficult because they lack tolerance.

They get offended when others are honest with them, and they give themselves the right to say anything they want to anyone.

They might see enemies in everyone due to their lack of confidence, and poor self-image.

They can also lack the initiative and endurance to follow their dreams and goals, which in turn makes them miserable and bitter.

They can possess healing powers, especially powers of healing using the power of their mind.

Woman with Pallas placed in Cancer

Women with Pallas in Cancer are caring and nurturing beings.

They love their families and usually become mothers early in life.

They are feminine women who seek masculine men who will protect them.

These women are not the types to give initiative or go through life alone. They need a man by their side to rely on them.

They prefer the traditional female role and actually enjoy this role.

They don’t need much adventure and experience. Their home, children, and spouse are the center of their attention in most cases.

They easily get insulted, and they can be prone to sulking and staying angry for a long time without much reason.

They always expect others to attack them, so they attack first.

They are often creative and love to decorate their home.

Preparing delicious meals for their loved ones is also one of their favorite activities.

They have great respect for authorities in their lives, especially men authorities, and mostly for their father and spouse.

Man with Pallas placed in Cancer

Men with Pallas in Cancer have a protective and nurturing nature.

They are not adventurous types, and their preferred way to spend their free time is being at home with their family and friends.

They are usually economical and love to save money for the uncertain future.

Regardless of that, they selflessly help others in need, and this doesn’t refer only to their loved ones.

Like women with this placement, men with Pallas in Cancer are easily offended and are prone to long periods of sulking.

They are intelligent and creative, and some use their creativity to make a living.

These people are not very determined and persistent.

They easily give up on their goals because they don’t want the struggle and lack faith in their abilities.

Pallas in Cancer is a placement that makes the person very nurturing and caring towards their loved ones, but also other people.

They are home types and enjoy making their home a cozy place they and their families will enjoy.

Both men and women love to prepare delicious meals and they also love to eat which often causes problems with weight.

They are creative and intelligent and know how to make and save money.

They can be stingy and save money on everything.

These people are emotional, and they get hurt easily, but mostly because of their nature which sees nonexistent attacks.

They often lack tolerance for other people and can appear very selfish.

They attack others but when they are told the truth, they begin sulking and stop talking to the person who dared to speak their mind to them.

Some of them might possess psychic powers and healing abilities.

They are often not very determined and easily give up on their goals. This is an obstacle to their success.