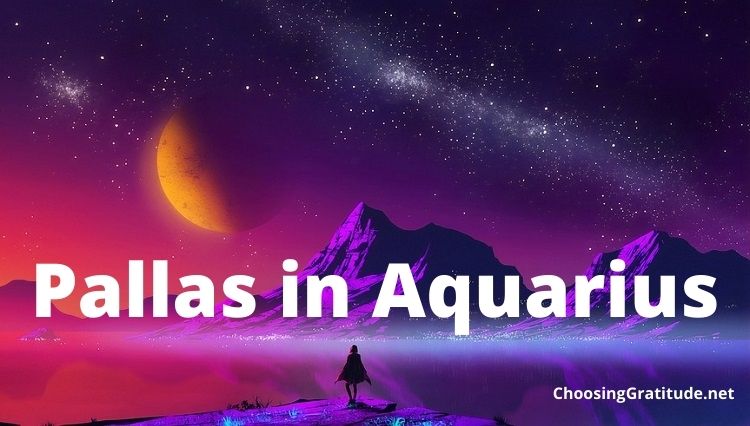 These celestial bodies are first discovered at the beginning of the nineteenth century, with Ceres as the first, and Pallas as the second discovered.

These celestial bodies, also called minor planets, and size from 1 meter to 1000 kilometers in diameter.

In myth, Pallas was the friend of the Greek goddess Athena, daughter of Zeus, supreme deity in the Greek pantheon of gods.

Pallas was a nymph that inhabited a lake in North Africa.

The two friends played together as children, and during one of their games, Athena killed Pallas.

Crushed by the pain caused by the devastating event, Athena took the name Pallas as her alternate name in the memory of her good friend who unfortunately lost her life by her hand.

Athena was considered the goddess of war but also wisdom and was the goddess protector of the Greek city of Athens.

It can show our nurturing qualities and ability to take care of others, especially those we love.

Pallas can sometimes show whether we possess healing powers.

This asteroid shows our determination to fight for our goals and beliefs, as well as our rights.

It also shows our ability to control our urges using wisdom, reason, and our intellect.

This asteroid in our natal chart shows our relationships with men in our lives, and this is especially true for women’s charts.

It also shows how much we trust the men in our life, whether we instinctively trust or distrust them.

It also rules our relationship with people of authority.

Pallas rules our wisdom. It shows how wise we are and how wise we approach to achieving our plans and goals in life.

This asteroid demonstrates our ability to make the right strategies in life to get what we want and be where we want to be.

People with well-placed Pallas are well organized and they tend to make plans before doing something.

They aren’t haste in their reactions and they tend to take their time and think before they take action.

These people don’t make decisions before thinking them through and use their intelligence to neutralize potential conflict.

Pallas rules creativity and arts and people with love for crafts and the arts often have a prominent Pallas in their natal charts.

They often do something creative for their living, such as design, movies, photography, sculpture, etc.

People with strong Pallas are usually diplomatic and often with talents for diplomacy and politics.

Those with challenging Pallas can lack tact and sense of diplomacy and are prone to conflicts and temper outbursts.

Pallas sometimes gives the person healing abilities, usually through the power of mind.

When Pallas is afflicted in a men’s chart, they might express passive behavior, weakness, and dependency, which are considered mostly feminine traits.

Women with challenging Pallas, can lack feminine traits, can act aggressive and masculine. They might compete with others, especially with men.

The sign of Aquarius is an air sign and shares the lightheartedness of the other two air signs, Libra, and Gemini.

This is one of the most intelligent and innovative of all signs.

Aquarius people sometimes appear as from another planet, due to their unconventional approach to life and their often extreme ideas and attitude.

They want to be different from others, which sometimes is “at all costs” and that sometimes doesn’t turn out well.

However, in most cases others, and sometimes humanity benefits from their unique approach to things. Many of them are considered rebellious, and they often are.

These people are innovators, and they want to make the world a better place.

They love people and are true humanitarians, and often choose a profession where they can somehow help other people.

Aquarius people or those influenced strongly by this sign aren’t malicious.

Their unconventional nature might make them blunt and rudely direct, but there is not a bad intention underneath their words.

They are just curious and open-minded. Their child-like nature is what makes them irresistible and impossible to get mad at. You simply know that their intentions are pure.

These people are very intelligent, and they seem to possess the inner knowing from other realms of reality.

Their approach to dealing with matters is always very unique and often unexpected.

They are sociable and love being around different people.

They are adventurous spirits, and they love to explore new things.

They are the ones to be the first to try out something new, especially if there is an unusual and dangerous moment about it.

Even though they might appear not very emotional and distant, they are in fact, very caring and protect those they love but also other people.

These people are the ones that are most likely to help a complete stranger and not expect anything in return.

These people love to have innovative solutions to all problems.

Thinking outside of general standards of thinking is their favorite way of thinking and doing things.

They always prefer the alternative approach to matters.

These people are inventors, and they are the ones tracing the path for the rest of us.

They don’t follow tradition, but they create their own.

Both men and women with this placement are very independent.

They don’t like to rely on anyone, and especially women have a problem accepting the traditional role where the man is taking care and providing for the woman.

These people are excellent at taking care of their own needs.

They are protective and generous, and demonstrate such behavior towards their loved ones, but also towards complete strangers.

Pallas in Aquarius people have a problem with being guided.

This is why they usually experience problems with all kinds of authority, such as their fathers, professors, bosses, but also other authorities in their lives.

For them, it is often a problem to obey laws and regulations, and they possess a strong urge to break them.

Often these people are freedom fighters and human rights activists.

They are deeply hurt by injustice. These people are warriors, and they fight fiercely for what they believe is right.

They don’t accept obstacles as something that could ever prevent them from reaching for their goals.

They are inspired by them and eager to overcome the challenge on their road.

They have a unique way of dealing with the simplest matters, and they enjoy it.

Pallas in Aquarius are happiest when they are doing something for the benefit of many people, especially for the humanity.

These people love technology and are often innovators themselves.

Woman with Pallas placed in Aquarius

Women with Pallas in Aquarius are unique individuals. They aren’t typical weak and dependent women.

These women are prepared for every occasion, and they always know what to do.

Often they experience problems with men in their lives who try to protect them and offer them their help.

These women often have a belief that they can do all by themselves and this is not very romantic, especially to men who prefer old-fashioned, feminine women.

It is not that they are not feminine, this women are stubborn, and they want to be in charge of their life and their decisions. Men often have a hard time with them.

They are nurturers and care givers and enjoy being in this role.

They are selfless and happy to offer their help to those they care for, but also for others who might need their hand.

These women can sometimes experience difficulties with the men in their lives, especially their father.

They have a hard time accepting his authority and him telling them what to do.

In time, they learn to respect them, but a dose of rebellion remains always. They simply need to have things their way.

These women don’t get along easily with men who are strong and masculine. Those men find them sometimes aggressive and overly masculine.

Their intelligence is incredible and otherworldly. They are creative but often in a strange and weird way.

These women often aren’t good diplomats because they want to have things done their way, and diplomacy implies compromise.

They are very wise, but their rash actions and decisions might sometimes cost them a lot.

Man with Pallas placed in Aquarius

Men with Pallas in Aquarius are very interesting and dynamic beings. These people often lack tact, and they aren’t the best of diplomats.

The main reason for this behavior is their free spirit and the fact that they cannot stand any kind of restrictions and rules.

These men are very rebellious, and they like to do things their way.

They are fierce protectors of their beliefs, and those they love. Men with this placement are also protectors of humanity, and this can mean a variety of things.

They are humanitarians in the true sense of the word. Because they are so smart and talented, they can be great at inventing new things that will benefit many people.

These people possess unique personality, and they are fun to be around.

They know a lot about a variety of subjects and make great company.

As fathers they have a bit of an unconventional approach, but their kids never get bored. These men do their best to keep their minds and body occupied.

Men with Pallas in Aquarius work on building the spirit of adventure but also the spirit of rebellion in their children, especially their male children.

Because they usually have issues with authority, these men often get in trouble.

Some of them never learn the gift of diplomacy and keep getting into trouble because they lack flexibility and ability to follow guidance and rules.

Pallas in Aquarius makes people who have it in a strong placement in their natal charts rebellious and adventurous.

These people, both men and women, usually don’t deal well with authority and rules.

They simply don’t like them, and they prefer making their own rules.

Their approach to life and dealing with issues is unconventional.

They love being different from everyone else and invent new ways to solve their problems.

Pallas is the asteroid of diplomacy, but these people usually aren’t diplomatic.

Their drive to trace their own way stands in the way of complying with the rules.

They enjoy helping people who need their help.

They are true humanitarians who often do activities for the benefit of many people.

Because they are very intelligent and innovative, these people sometimes invent things that are of use to all of us.

Yes, they might be unconventional and different from anyone else we’ve met, but they never have bad intentions.

They sometimes get in trouble because they hate rules.

Some of them go to great length trying to avoid following the rules.

The most extreme cases make their own rules, which is sometimes illegal and that gets them in trouble.

Women can have a problem with following the authority of men in their life and act very masculine and repulsive to men who prefer more feminine women.

Men with afflicted Pallas in Aquarius can act dependent and feminine and lack sense of direction.

People with this placement are very creative and often create things that benefit the masses and doesn’t have only artistic value.

They do things to improve their lives but also the lives of others.

They are fun and interesting to be around. People need to learn to respect their uniqueness and not interfere with their way of doing things, and they will be rewarded with the best these people can offer.

They are great protectors and nurturers and they do it in a unique and special way, different from anyone else.