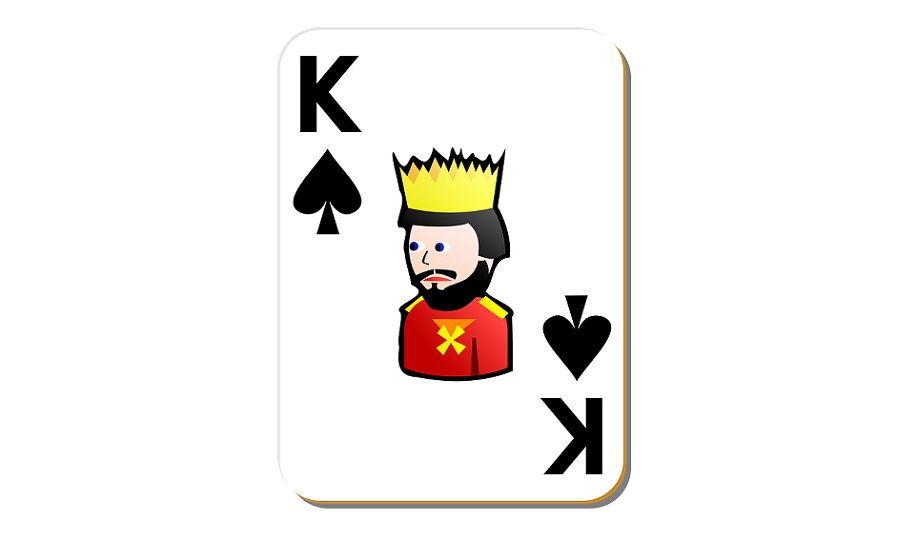 The history of cards is centuries long. We still don’t know when and where cards first appeared, but most likely they come from China around 1000s.

From there, it is believed that the first card decks were brought to Europe, to Italy or Spain around the end of 13th and beginning 14th century.

They were a luxury item at first and not many people had the opportunity to have them in their possession.

The first cards were hand-painted, and in some countries (France for example) had images of royalty presented on them.

In time, their production was simplified, and it was possible to acquire them easy.

Different countries added their touch to the final outlook of modern card decks.

For example, the French added the two colors (black and red) for the suits, and the suits we use today (spades, diamonds, clubs, and hearts).

The spades suit is named after the word “spada” which means sword in Italian.

In tarot, this suit is called the swords suit.

People who are spades type are active and love action of any kind.

Their body is active but also their mind is active.

They need change so they don’t get bored. Success is important to them and they need to feel accomplished.

They are also spiritual but sometimes take time to get to this realization and focus on their spirituality because their main focus is the material world.

The king is a card with a depiction of a king.

This is usually the highest ranking card. It is one of the court cards.

The king card represents a mature person who has a lot of life experience and has achieved success.

It has a fully developed personality with control over their actions, thoughts, emotions, and feelings.

The king card represents someone who is stable and knows how to achieve their goals and dreams.

These are usually people in managerial positions with knowledge how to organize others.

A king personality is a provider who is responsible and able to take care of others.

In cartomancy and tarot, it usually represents a male person above 40 years.

It doesn’t have to represent a male figure, and if it is a female, it usually has masculine qualities to her personality.

This card represents someone who is confident and knows where they are in life.

It is a sign of someone reliable and mature.

The King of spades card is a symbol of intellect, authority, and ability to accomplish goals and desires.

The nature of the King of spades is detached and objective.

The person represented by this card is calm, determined, focused, good leader, lawyer, judge, military commander, etc. and is someone who knows how to keep their emotions under control.

When the situation is tough and demands stable reactions, these people are at their best.

In regards to events, the King of spades card is a sign to be detached and objective in some situation to be able to evaluate the facts and make the right decision.

This card is reserved for January 1st, and it is the card of the most powerful spiritual wisdom and energy.

The person whose card this is has an enormous potential and it is not easy for them to make the most of it and express it fully.

King of spades people are born leaders and they have almost unlimited powers of achievement.

Even though they possess many qualities, many of these people don’t manage to use them and remain unaccomplished.

They encounter difficulties and struggle and only the strongest reach their goal, which is success and accomplishment of their desires.

These people often need to put in more effort than other Kings to succeed.

Some of these people possess great wisdom and knowledge of spiritual truths in the Universe and use their gifts to teach others of these truths.

King of spades person often has issues with relationships and commitment.

Their nature is indecisive and idealistic.

They are never sure about the right choice of partner.

It is hard for them to decide which is the right one.

This trait often prevents them from getting married, and if they don’t get married early in life, they often don’t marry at all.

People King of spades are very ambitious and have big goals in life.

However, they often don’t achieve many of them due to their indecisiveness and inclination to overthinking.

People love them because they are communicative and easy to get along with.

They love to learn new things and expand their knowledge.

King of spades is someone who is very intelligent and quick witted.

They enjoy sharing their knowledge and insights with others and prefer being around people who are likeminded.

They have many abilities but still many of them are not content with the success and their accomplishments in life.

It is vital for them to realize their role in the circumstances they are experiencing in life.

King of spades people shouldn’t blame others for their faults and failure.

Instead, it is better for them to discover the traits in their nature that are preventing them from achieving success.

This might be due to their indecisiveness, laziness, overthinking, etc.

When they discover the reason, it is advisable they work on getting rid of the trait that is not serving their good.

Their indecision and overthinking usually gets in the way in their private life, preventing them from establishing a satisfying and lasting romantic union.

Sometimes the reason for the lack of success despite all their qualities is the lack of trust in their abilities.

This might not be a conscious thing because the King cannot easily accept any weakness in their nature.

This is why this person needs to dig deep to discover and accept these weaknesses so they ca heal them.

The King of spades is a very spiritual card and gives the person whose birth card it is strong spiritual gifts.

They are wise and teach others spirituality, but only when they themselves become aware of the spiritual gifts they possess.

Sometimes, these people are unaware of them, because their mind is mostly focused on the material realm.

When they discover the spiritual realm, it usually helps them achieve their goals in the material.

When they manage to find their role in life, and they stabilize their indecisive nature, these people can become excellent leaders, teachers, and healers.

All it takes for them is to find peace within themselves and come to terms with the circumstances in their life.

When they accept where they are things usually start to change, and they soon reach the place they desire to be.

The King of spades has a sharp mind that helps them dissect any situation and make the right conclusions.

They have a strong attention to details and can also see the bigger picture of things.

Even though this person sometimes appears weak, this doesn’t have to be their destiny.

They possess infinite potential and it only takes for them to realize that fact.

When they begin believing that they can achieve anything their mind can imagine, miracles begin happening.

King of Spades personality is born on January 1st.

King of Spades Card in Tarot and Cartomancy

When the King card appears in a spread, this card usually represents some person in our lives, usually an influential adult male or someone with a lot of influence in your life.

The person described by the King card can be someone with controlling, manipulative, and dominant nature, although this doesn’t have to be the case.

The King can also be someone who is caring and giving and has good intentions towards the client.

It is important to analyze the King card alongside other cards in the spread.

The King card can represent our grandfather, father, teacher, or some other authoritative male figure in our life, such as our superiors.

When the King of spades appears in a spread, it usually indicates some older man of authority, often representing some kind of conflict.

In a spread, the King of spades is a sign of obstacles to achieve a goal.

Maybe this is a sign that someone who wants the same thing as the client might try to prevent the client from getting it.

This might be a jealous coworker or boss if the question was work related. In a love spread, the King of spades might represent a rival.

Fortunately, the King of spades doesn’t indicate an issue that cannot be resolved and the solution to the problem can be discovered by analyzing the other cards in the spread.

If the King of spades is placed upright in the spread, it represents routine and structure; it could be a message to be more methodical and use your reason rather than your heart.

It is a sign of logical thinking and thinking things through.

The card symbolizes using the intellect to make decisions instead of making decisions and taking actions based on our emotions.

Sometimes, the King of spades can indicate legal matters that are concerning the client, or the possibility of some legal issues in the future.

The person might need to deal with law enforcement officers, courts, etc.

The King of spades can sometimes be perceived as someone who lacks emotions and is cold and detached.

The main reason is their intellectual nature and approach to things.

This is just the outer appearance of this person.

They are emotional and caring inside, and it takes time for them to relax and trust someone before they can express this side of their personality.

This is a person most people come to seek advice on different matters.

People value and respect their objective approach to matters and their honesty.

They can be brutally direct when they are telling their opinion and are not afraid to speak the truth.

They won’t tell lies just to make someone satisfied.

They believe the truth needs to be told to help resolve matters because keeping the truth untold just allows the problems to become bigger.

This person is a good listener.

When the King of spades is reversed in the spread, this can be a warning about possible immoral actions.

It is important to be grounded and pay attention to your actions.