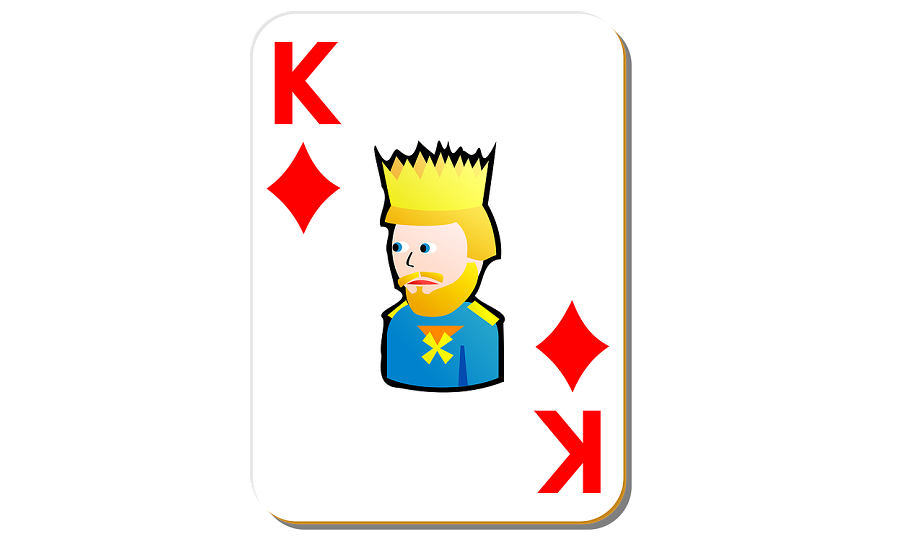 Cards have evolved into their modern shape for centuries.

They probably were first made in the 10th century, in China.

Several centuries later they were brought to Europe where they were first an object of prestige which only the rich could own.

It is no wonder why many people could afford owning a deck of cards, it was very expensive to make them.

They were hand-made and hand-painted, which required time and money.

When their production was simplified cards became more affordable, and they began to spread across all European countries, and later around the world.

The diamonds icon is used for centuries as a symbol of diamonds.

People whose birth cards fall in this suit are usually money oriented and focused on accumulating wealth.

Sometimes this can be their only priority in life.

King cards have a picture of a king on top.

The King card is the highest ranking court card.

It symbolizes a mature male figure (sometimes a female) with a lot of life experience.

This is someone who is well-accomplished and wealthy.

This card represents someone with a developed personality, who knows how to control their emotions, actions, feelings, and thoughts.

It is someone stable and reliable.

Usually this is someone in a position of authority and possesses great influence over others.

They often have managerial skills, and their job is to organize other people.

This card represents someone who is above 40 years of age.

If a woman is represented by a King card, it is usually someone with masculine qualities. Maturity is one of their main traits.

King of Diamonds people have a strong appreciation of money and material values.

They enjoy earning them as well as spending them.

In general, they don’t have a tendency of overspending and are better in keeping it than throwing it away, except in some extreme cases.

They are responsible towards all things in life, and money is something they consider very important.

They know how to take care of it.

Usually, these people end up in positions of power.

It is their desire in most cases, but often their natural abilities are the ones that put them there.

They are well-provided through their family or their effort.

They love taking care of others and are calm only when they know that their family is taken care of.

These people are friendly and sociable.

They are also very intelligent and enjoy being around similar people.

They are ambitious and start following their dreams early in life.

Because they don’t wait to take action, they usually receive the rewards of their efforts early in life.

King of diamonds people usually become successful and wealthy at their young age.

Status is important to them, which often is the cause why they marry or enter relationships with people that can alter their status.

They also choose partners who are financially well-off, so their wealth increases.

King of diamonds can be very controlling when it comes to finances.

They have the last saying about spending money in their family.

Some of them might be spendthrifts, but most of them are good with money and watch carefully where they spend it.

The King of diamonds person is good with their money but also other people’s money.

They have good sense of business and investment.

It is like they instinctively know where to invest their money and when to act when it comes to good business arrangements.

Their mind is quick, and nothing misses their attention.

They love traveling, and most of them mix their travel with business, so they manage to enjoy while making money.

They often do business with foreigners and foreign countries which is often the cause for packing their bags.

Their nature is kind and understanding. They are easy to cooperate with because they are aware of the importance of compromise and mutual understanding.

They are good team-workers and often form partnerships for their business.

They have a dominant nature, but they tend not to impose their opinions onto others and prefer making compromises that make everyone happy.

The truth is that their best role is the role of a manager and someone who organizes others because this is where their qualities can be expressed completely.

Some of them can be very stubborn and don’t allow anyone influence them in any way.

They might refuse to accept any advice even when they subconsciously know that this is the right thing to do.

Some of them have a rebellious nature without any cause.

Later in life they come to an understanding that such attitude is only hurting them, and they begin changing.

King of diamonds people are aware that they have the power to make others do what they want, but they consciously choose not to do that (at least most of them do).

Many of them have different creative gifts and they use these gifts successfully to increase their wealth.

Some of them become famous and very wealthy.

Sometimes these people might be perceived as tough and cold, but it is just their exterior.

They are warm-hearted and helpful in most cases.

Their nature is authoritative, but they always have people’s best interests in mind.

King of diamonds people are usually wealthy, but they also have influential and rich friends and acquaintances who can always jump in and help them in times of need.

These people are successful as owners of their own business and they should have the courage to start, because success is almost always ensured.

They have a mature approach to life and are very responsible and organized and this helps a lot to their achievements.

These people love to be taken care of, but they also love to take care of others, which is why they need to have enough money.

Care is their preoccupation, and they don’t feel good when they are unable to provide for their family.

These people are generous, and this doesn’t only refer to their family members and close friends.

They sincerely enjoy when they are able to help other people.

Their gifts and talents help them achieve success in any field they choose.

They are ambitious enough and know what to do to pursue their goals.

Their ultimate goal is creating enough material security to be able to relax.

Some of them never define what is enough security and they spend their entire lives creating more wealth.

It is important not to neglect their other priorities in life because this will cause disappointments and losses in different life spheres.

Some King of diamonds people can be egotistical and selfish.

Their focus in usually on them and making money, and others might adapt to their ways of living, or they won’t be in their life.

They might have an inconsiderate attitude towards other people and insult them with their reactions.

Their nature can be aggressive and domineering.

These types of King of diamonds people are rare, because they usually know how to control their impulsiveness and urges and generally treat others with respect.

Women who have the King od diamonds as their birth card might have some masculine traits and tend to have a dominant and authoritative attitude.

They must pay attention to this, especially when it comes to their relationships.

These people love to be around educated and fun people.

They choose partners who can be a suitable match and often form nosiness partnerships with their partners.

King of Diamonds Card in Tarot and Cartomancy

In tarot and cartomancy, King od diamond is a card that represents a rich (blond) man that has some role in the client’s life.

The king of diamonds symbolizes someone of authority who has the influence and power and is in a way involved in the client’s life.

When this card appears in a spread it might indicate meeting someone with the king of diamonds qualities, or this person is already in the client’s life.

Depending on the cards surrounding the King of diamonds, the reader can determine whether this person’s intentions are benevolent towards the client or their intentions are bad.

In business readings the King of diamonds can indicate the person’s boss, or their potential boss.

The appearance of King of diamonds in such reading is often a sign of job promotion, or a new job offer.

It usually indicates business success unless it is surrounded by cards with challenging nature.

For some readers, the King of Diamonds represents a person who is not trustworthy and deceitful.

This person might also have some immoral occupation but is very handsome and attractive.

Not all readers consider this card a sign of deception. For most readers, the King of diamonds symbolizes financial abundance and wealth.

It signifies success, especially if surrounded with beneficial cards.

This is a serious and well-accomplished man who knows what he wants and knows how to get it.

It is someone who has established financial security and doesn’t have to worry about money anymore. He is reliable and responsible.

There can be a dose of arrogance attached to this man, but only because of the fact that he is proud of being so accomplished.

Sometimes king of diamonds indicates a person who is a father figure, someone mature and knowledgeable who can give the client some good advice, regarding finances and other life matters.

This card is often a sign of major gains and increase of finances. It can indicate the person’s efforts finally starting to pay off.