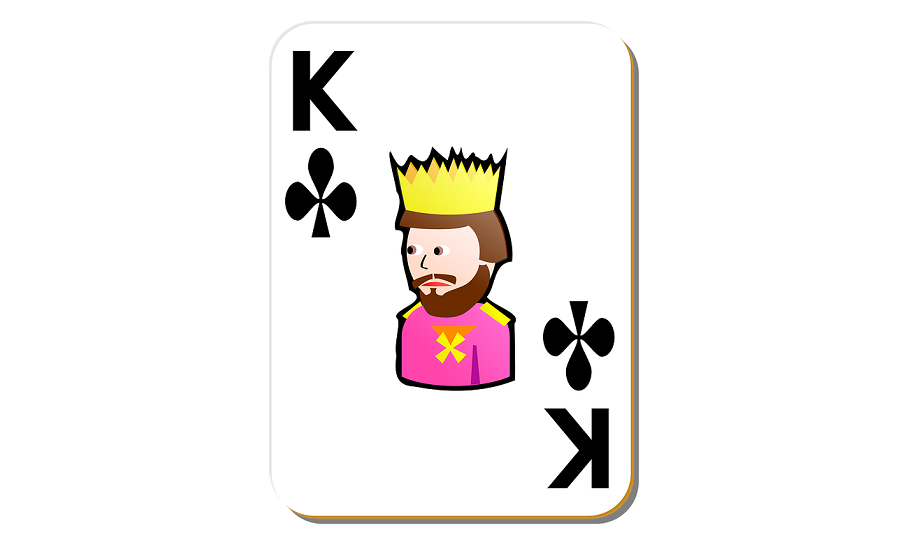 It took a lot of time for cards to look as they do now.

Lot of centuries have passed since they were first created.

The accepted theory is that their origin is in China, possibly in the 10th century AD.

Cards were a prestige item when they first appeared because they were hand-painted which required a lot of time and money.

From Asia, cards were brought to Europe and their expansion begun when mass production started.

Someone with birth card from the clubs suit is usually energetic, active, ambitious, passionate, magnetic, unpredictable.

Success is what motivates their action, and they are usually able to achieve their goals and become successful in life.

Often their ego is strong which causes issues with other people.

They can be self-consumed and seek attention which are traits that people dislike about them.

The King card has a depiction of a king drawn on it.

This is the strongest card and the highest ranking court card.

King cards symbolize older male figures (sometimes they can represent older female figures) that have a lot of experience and which have achieved success in life.

Usually, the king card represents someone who is financially stable and accomplished in life.

Their personality is well developed, and they have enough maturity, wisdom, and experience to control their emotions and reactions.

They also control their actions and their thoughts.

King personality is reliable and stable.

Often this card represents someone in high ranking position with influence over other people.

This person is often someone with leadership skills who organizes other people.

King cards usually represent people who are over 40 years old.

When the King card represents a woman this person usually has masculine qualities.

King person is someone mature.

The King of clubs is a card representing authority and knowledge.

This card symbolizes knowledge acquired through many past lives.

They are proud people and very dignified.

This can often lead to egotism and superiority complex.

Some of them might have a tendency towards escapism and addictions.

Often these needs stem from some early life disappointments which they cannot release.

Childhood age was difficult for many of these people and they carry a lot of unhealed traumas from this period.

The King of clubs has a sensitive nature.

Their emotions are easily hurt even though on the outside they seem tough.

These traits often prevent them from using their full potential.

The most important thing they should do is deal with their insecurities and childhood traumas.

Until they don’t leave them behind, they cannot expect to achieve their desired success in life.

Usually, they are forced to face the inner conflicts they carry through some life circumstances they cannot avoid.

After experiencing these circumstances, they become aware of the things they need to change about themselves and their personality which in turn leaves them feeling relieved and free.

These people often have a turbulent first part of life during which they gain their wisdom and experience.

After their forties, they usually enjoy the fruits of their labor as well as their experience and gained wisdom.

Many of them are well respected members of their community and people turn to them for advice and help.

King of clubs people are usually successful in their chosen profession.

They don’t achieve true success before they learn to control their urges to control and dominate others.

When they overcome these traits, they gain the respect and admiration they truly deserve.

They are communicative people and often find themselves in a field where they come in contact with many people.

They are often in positions of authority and leadership.

King of clubs people are possibly the most intuitive of all the birth cards.

They use their intuition in personal as well as their professional life.

They sometimes underestimate the importance of time and have a tendency of wasting it not using their full potential which they later regret.

These people have a tendency of experiencing stagnancy in their marriage and not having enough motivation to put in the effort to improve the relationship with their partner/spouse.

Their partners might find them domineering which can cause defensiveness.

This happens with both women and men King of clubs.

Especially the women might have a problem with this trait because they might be considered masculine and not very attractive.

It might be difficult for them to find the right partner because of their strong nature.

These people are emotional, and they need to experience a close bond with their partner.

They also need a partner who will be tolerant to their need for freedom.

They are often very successful artists because of their creative potential.

Many of them are popular in their surroundings and some even reach global fame.

These people perform best in partnerships even though they have excellent leadership skills.

Their analytical mind makes them good at organizing and this is something that helps them greatly in their job, but their life in general.

King of clubs can be perfectionists which often is a great burden to leading a stress free life.

They have strong attention to details and a vivid picture of how things should look like.

This is why it upsets them much when things don’t go their way.

They can be stressed over things that other people don’t even think about.

Sometimes they don’t stop until they arrange every small detail to be the way they want.

This can be a problem in a work environment and also in their personal relationships because they are often wasting their time on perfecting things without practical reasons.

These people love their family and are great parents.

It is important for them to provide for their families, especially their children.

Fortunately, they are usually capable of providing enough because they earn well and have a substantial financial base to rely upon.

They often choose professions in the legal field, such as lawyers and in the field of real estate.

Usually, they don’t have a problem finding a partner because they are attractive and have a lot of opportunities to date.

King of Clubs Card in Tarot and Cartomancy

The King of clubs in a card reading is a good sign.

It symbolizes action and energy.

This person is also creative and often doing some creative job.

They are good at organizing others to realize their ideas.

It might indicate becoming successful and gaining the necessary confidence to achieve their goals.

This card could indicate that the client has the vision and idea where to go and how to achieve their ideals.

This card indicates focus, charisma, and determination, and the client is possibly embodying all these traits during these times.

The King of clubs in a spread is a sign of manifestation of the person’s goals into reality.

Maybe the time has come for the person to see the results of their past actions.

It can be a sign of fulfilment of some long term goals.

In a love reading, the King of clubs can indicate a new romantic interest, someone who is accomplished, financially well-off, stable and knows what they want.

It is also someone who is good looking, charming, and magnetic.

This is someone who is mature and knows what they want and how to get it.

If other cards in the spread are beneficial, this might be a sign of a marriage potential.

Sometimes, the King of clubs is a sign of new business or other opportunities for success and achievement of goals.

This card reminds the client to be alert and ready to seize the opportunities that will appear.

This will take their determination and will to take action.

When the King of clubs appears reversed in a spread, this can indicate inhibitions and inability to take action or undertake the leadership role in some situation.

This card in a reversed position might indicate that the client knows exactly what they want and how to get there, but some external obstacles are preventing them from acting.

Maybe some prerequisites need to be fulfilled first and this will require time.

Maybe the client isn’t ready yet physically or mentally to undertake some actions.

Patience is required when this card is in a spread reversed.

In some cases, when the King of clubs is reversed in a spread this can indicate trying to achieve goals in an aggressive and dominant manner.

This behavior might be putting off other people who don’t want to help the king of clubs fulfilling their goals because they don’t like the way they are treated.

If the client is acting in this manner, they need to learn how to control their reactions and behavior and stop chasing people away.

Sometimes the King of clubs reversed is a sign of unrealistic goals.