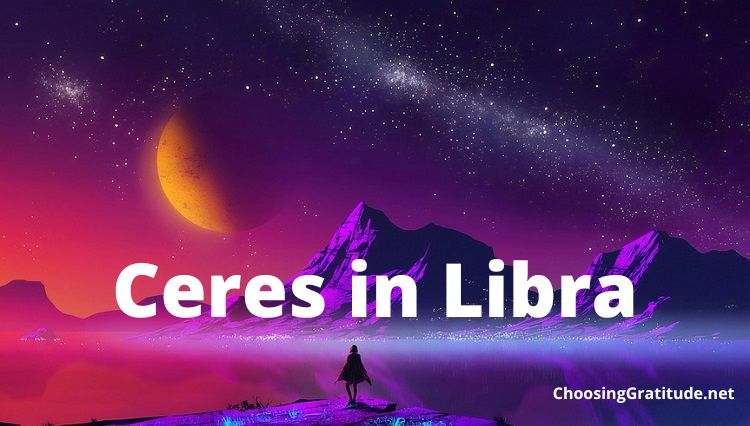 In astronomy Ceres is now considered a dwarf planet. It is positioned between the planets Jupiter and Mars in the asteroid belt.

This celestial body was discovered in 1801. and it was the first ever discovered asteroid. At first, it was considered a planet.

In astrology, Ceres is still considered an asteroid.

The name of this asteroid originates from the name of the Roman goddess ruler of agriculture, fertility, motherhood, and mother-child’s relationships.

She was also the goddess of female virtue and childbirth.

Ceres was a prominent goddess in ancient Rome, and she had dedicated special rituals during times of harvest, marriage ceremonies and funeral ceremonies.

She is depicted as a mature woman. Her counterpart in the Greek pantheon of gods is the goddess Demeter.

Romans believed Ceres had the power to help the process of fertilization and multiplication of plants and animals.

She was also believed to help with women fertility.

In ancient Rome there was a festival devoted to Ceres. It was held in April and was named Cerealia.

She was considered the protector of the rights of plebeians and their laws.

She was also honored during funeral ceremonies because she was believed to ease the process of the dead moving into afterlife, helping their spirit easily move without becoming trapped between worlds.

Even though Ceres is considered a dwarf planet, in astrology it is still considered an asteroid.

Much of its mythological role is attributed to Ceres as a goddess.

Ceres also represents the stages a woman goes through her womanhood, until finally becoming a mother.

The placement of Ceres in the natal chart gives information of the woman as a mother but also a parent and spouse.

Ceres also describes the nurturing side of a person, and their readiness to nurture and take care of the people in their life.

The characteristics of the sign as well as the house where Ceres is in the birth chart, show how the person deals with all these roles.

It shows your attitude towards people, but also nature and animals.

If Ceres is prominently placed in the natal chart, meaning, if it has strong and beneficial aspects with the ASC, and personal planets, the person will be concerned about their wellbeing.

These people pay much attention to their diet and try to eat as healthy as possible.

They give advice to others, and usually have nurturing nature.

They are also concerned with the wellbeing of nature and animal life.

This asteroid describes how we nurture and take care of others.

If this asteroid is placed in an air sign, you most likely take care of others by communicating with them.

When Ceres is in an earth sign, possibly you have a tendency to nurture through providing food and practical advice.

With Ceres in fire sign, you must take care of others by giving them moral support and encouraging them.

In water sign, Ceres supports others by giving them emotional support.

It is the most aesthetic of all the signs and cannot stand imperfections in any form.

Unfortunately, this quest for perfection, especially perfect beauty is something that is one of Libra’s major obstacles to happiness.

She is always in pursuit of perfection which doesn’t really exist.

Nature isn’t perfect, humans aren’t perfect, which is why Libra’s goals are sometimes impossible to accomplish.

This sign, and this refers to both men and women are constantly trying to perfect themselves, their looks, their behavior, their surroundings, people around them, and this only exhausts them because they are never satisfied with where they are and what they have.

Even though they’ve been blessed with so much beauty in their lives, both through their appearance but also through their creativity and artistic gifts, unfortunately these people due to their desire for perfection, which can only be artificially created are often not happy, depressed, and lack appreciation for the blessings they have.

It is as if they are not aware of how blessed they are.

These people cannot stand discord in any form. They are diplomats with tendency to neutralize disagreements between people and help them find a peaceful solution.

They are sensitive and empathic to people’s problems, and are always ready to help, even when no one is asking them.

Libras are truthful and just, and fighters for everyone’s rights. They are obsessed with symmetry and equality and if something in their life is out of balance, it takes a while for them to get back in alignment.

Their feelings are easily hurt, especially by injustice. These people are gentle and kind to all living creatures, and if someone’s treating them with disrespect and in a rude manner, this hurts their feelings greatly.

They try to avoid conflict and want to be on good terms with anyone. Even so, most of them aren’t afraid of speaking their mind about the things and situations they find aren’t right.

These people are good with their words and can be excellent at debates and persuading people in their beliefs. This makes them good lawyers, diplomats, and politicians.

Libras know how to beautify themselves and their surroundings, and they make excellent consultants in this field for others.

Often they possess different creative skills, such as talent for music, art, writing, etc. they often choose a profession that is related to their artistic skills and love of beauty, such as design, decoration, art, etc.

Environments that are displeasing to their eyes are annoying and these people cannot stand there for a long time.

Both men and women Libra have excellent manners and are very tolerant people.

These people love the company of others. They are by no means solitary types.

Many Libras cannot stand to be alone, even when it means staying in a relationship that is obviously bad for them.

Their desire for attention and confirmation of their beauty and worth, can make them prone to flings outside the relationship.

They love to be admired and complimented, due to their often insecure nature and lack of self-respect.

They are charming and a pleasant company. These people have a large circle of friends and acquaintances, and their adaptable nature helps them get along with almost anyone.

They often struggle with indecision which makes them aimlessly wonder for the answer what they should or shouldn’t do.

When Ceres is placed in the sign of Libra that makes the person very caring and nurturing to the ones they love but nurturing in general.

Their thoughtful and righteous nature makes them sensitive to any injustice and people in trouble, so they are eager to put in their effort to help them feel and be better.

They can be prominent activist who fight for the rights of people and animals, and protectors of nature.

Their nature is protective, and they enjoy pleasing the ones they love.

They are very tolerant and try to see both ends of a situation before they make a decision about something or someone.

They are caring parents and have the sweetest most beautifully dressed children.

They love to do fun stuff with their children, and their activities usually have something to do with beauty rather than adventure.

However, they lack the ability to stand up for their children if they don’t have some stronger placements in their chart.

The main reason is their own insecure nature which seeks support from others.

Some of them exaggerate trying to impose their need for perfection onto their children blocking them in the expression of their childish behavior.

They care for others by talking to them, buying them beautiful gifs, etc. These people don’t have much energy to fight with real life issues.

They tend to solve them with money, but sometimes it takes more than that.

Woman with Ceres placed in Libra

Ceres placement is more important in women’s charts because of its symbolism and due to their role and duties as a mother.

For a woman, Ceres describes how she accepts her role as a mother and how she acts in this role. If Ceres is prominent in the woman’s chart, it makes her a dedicated mother.

Ceres is the ruler of fertility, and Venus, the ruler of Libra also rules fertility. This placement in most cases makes the woman with Ceres in Libra very fertile.

However, the sign of Libra as the sign of beauty, attention, indecisiveness, and insecurity often makes the woman difficulties in the process of devoting herself to her children and family.

Libra woman likes to be admired and this gives her boost of confidence.

She needs to be the most beautiful one and center of attention, and it is hard for many of these women to put themselves behind and give this space to their children and spouse.

Their social life is also very important to them, so this also becomes a problem when they need to give up on this part of their lives to devote themselves to raising a family.

These women surely love their children, but in some cases they tend to consider them as competition, especially women who have daughters. This competition is always superficial, based on physical beauty which is the most transient of all.

Of course, not all women with Ceres in Libra will act in such a manner. There need to be some other placements to confirm this behavior.

Ceres in Libra moms love to dress their children in beautiful clothes. They love to present their children as an extension of themselves and their personal style.

When they are put in a challenging situation, where they need to fight for their children and family, these women can act differently.

Some will fall into complete desperation, and others (with some stronger placements in their natal chart) will do all they can to get out of the struggle.

Their relationship with their mother is usually good.

Their mother might be the figure that has encouraged their love for beauty, but sometimes there might be a relationship of competition between them and their mother.

Sometimes these women can be overprotective towards their children because of their own insecurities and worries.

Man with Ceres placed in Libra

They are gentle fathers who make sure their children have the best conditions.

They also love buying their kids nice things, and they might be the ones to introduce them to the world of creativity and arts.

These men encourage their children to develop their artistic skills. Their children adore them because they always give them the nicest presents.

Their nature is diplomatic, and they tend to educate their children to stay away from conflicts just like they do.

Men might have issues with comparing themselves to their sons, and sometimes even competing in who looks better and is dressed better.

Beauty is somewhat superficial, and this makes these people superficial in this regard, like all Libra types.

They might have a creative profession that pays well, and they usually don’t struggle to provide for their family.

They love to be in beautiful surroundings and in possession of beautiful items.

Like women with this position, they might be prone to flirting because they love to feel wanted and admired.

Their indecisiveness and insecurities makes them not a very stable parent and spouse.

They should consider partnering with someone who has a stronger personality so they could neutralize this weakness.

Ceres in Libra makes people nurturing and caring. They have a feeling for what is just and tend to pursue justice at any cause.

They are protective and sensitive, and love to make their loved ones happy, buying them gifts and taking them to nice places.

Their nature is insecure and indecisive which often makes them problems.

Their love for beauty can sometimes make them shallow.