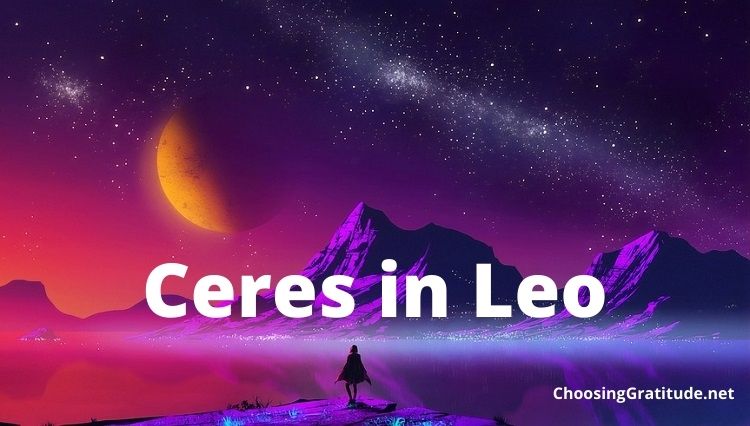 Curiosity is an integral part of human nature, especially in astrology, which has lasted for thousands of years.

People seek answers and guides in their natal charts, connection with other astrological signs, and compatibility through our relationships.

But it is valid to mention how many things can affect our astrological or natal chart.

Beyond the Sun and the Moon, the lines blur between astrology and astronomy as our natal comprehension expands to asteroids and other celestial bodies.

Only four Major asteroids can interfere with our mood, destiny, and life, even with our planet surrounded by millions of asteroids and comets.

One of those is Ceres, a dwarf planet in the asteroid belt between Jupiter and Mars.

What was classified as an asteroid in the 1850s, Ceres is now considered to be a planet.

It is the only celestial body inside the orbit of Neptune that can hold its gravity in hydrostatic equilibrium.

Ceres has 580 miles in diameter, and the first voyage in 2015 discovered that the planet had water on its surface – a rare occurrence for many celestial bodies.

Scientists believe it could have signs of life due to this, but not many trips around Ceres have been made ever since.

It was the first celestial body spotted in this asteroid belt in 1801 by Italian astronomer Father Giuseppe Piazza.

The two NASA observations in 2003 and 2004 discovered that it has a spherical body.

Even though it takes 35 percent of the asteroid belt mass, Pluto is still 14 times more massive.

Due to its size, scientists believe that the internal oceans the planet might have, are frozen.

But not completely frozen, as it has cryovolcanoes or ice volcanoes formed on the surface due to brines that flow from the depths.

One of the most famous cryovolcanos is the mountain Ahuna Mons, which rises to an elevation of 13.124 feet at its peak.

This fact makes Ceres the closest known cryovolcanic body to the Sun.

Days are shorter on this planet, as Ceres completes one rotation around its axis every 9 hours and takes 4.6 Earth years to make one trip around the Sun.

As a magnificent planet with various impacts and opportunities for people, Ceres was appropriately named after a Roman goddess of agriculture, fertility, and the love of mothers for their children.

She is also a symbol of the risk and sacrifices mothers are willing to make for their families.

The goddess is also known for the gift of agriculture to humankind, a protector of plebeian laws, and goddess of plant growth.

Ceres was the sister of Jupiter – a name for the most massive planet in our Solar System – with whom she had a daughter Proserpine.

The story of her kidnapped daughter, who was forcefully married to Pluto, the god of the underworld, is what differentiates Ceres from other goddesses.

She could not sit idle and let her daughter go, so she brought famine to the people until Proserpine was allowed to leave.

The Romans used her story to explain the turning of the seasons, as Proserpine had to return to the underworld for four months each year.

Ceres was praised for helping mortals with their everyday life, the most among other gods.

Her work was associated with the goddess of earth, Tellus.

Ceres holds a basket full of flowers and fruits, a sickle, and a crown made of wheatstalks.

Ceres carries importance in astrology and connection to specific signs in our natal charts.

Astronomers agree that it is more than an asteroid since its reclassification as a dwarf planet in 2006.

Due to its size, astrologists suggest that it should be taken more seriously as a possible ruler of some zodiac signs – especially as a ruler of Taurus.

The symbol of the planet is similar to a Venus sign with a missing left part missing – a crescent placed over a cross.

According to the connection with its goddess, Ceres rules agriculture, food, nourishment in astrology, motherhood, and family relationships.

Love comes naturally and simply for those with Ceres in their houses, as they tend to put others before them.

Zodiac signs with Ceres placements feel the need to protect and serve, but their sacrifice might come with grief – connected with the loss and separation that Ceres felt while away from her daughter.

But Ceres placements treat everyone with respect, including animals and other living beings.

They project love that does not need to be reciprocated as they care for and protect those they love.

Traits in Ceres might be prominent more in Earth signs, but they can also be visible through a conjunction to the Sun or Ascendant sign.

Those connected through their Earth sign can nurture others through food, cooking, and practical help.

Since we are talking about Ceres in Leo, a Fire sign, their love comes in moral support and encouragement form.

Ceres is a crucial element in astrological analyses, as it is an archetype of the Supreme Mother or the Mother Earth.

In a personal sense, it bounds with each zodiac sign and expresses care, nurture, and unconditional love.

It represents how you express that love for others, especially the ones closest to you.

Ceres could be connected with parental love if we remember the story about Proserpine, but it does not have to, as it is associated with general responsibility and devotion.

You can discover how you make others feel with your care and also where you might find comfort and happiness in your life through the sign that matches Ceres in your natal chart.

Before we nosedive deeper into Ceres natives in the Leo sign, we should remember their characteristics first.

People born between July 22 and August 22 stand out with their traits and personalities based on their natural leadership.

This Zodiac sign is ruled by the Sun and represented by lions as a part of the three fire zodiac signs.

Leos exude warmth and creativity and do not mind being the center of attention.

They have great personalities that are magnificent and striking, just like the lions they embody.

Leos tend to be passionate about their work and the people around them while being dynamic and unpredictable.

This fifth zodiac sign is associated with lions based on their personality and behavior, but they are also connected to the Greek myth of the Nemean Lion.

Nemean Lion was a vicious monster in Greek mythology defeated after terrorizing the Nemean villagers.

His fur was impenetrable, so he could not be killed with fatal weapons until Heracles strangled him and used his pelt as armor.

This barbarous Nemean Lion is an antagonist in the story, but it also highlights the strength, tenacity, and cleverness of the lion and Leos everywhere.

They possess determination once they can visualize their goals and the self-confidence to achieve them.

On the other hand, Leos can also be naive, arrogant, and stubborn in their ways.

When someone is confident enough to conquer everything, they put their mind to, it is difficult for them to accept criticism.

They might experience disappointment in various ways due to their boisterous personality.

But like the other zodiac signs, nobody is perfect and with only one side of the character.

Many various factors could play a crucial role in the upbringing and cluster or traits we end up having.

Ceres manifests in various signs as a devoted protector of a family, especially children.

The notion is not lost in Leos either, as their natural warmth, leadership, and strength come in handy with children and their upbringing.

We have learned about Ceres as a mother and what power she possessed once her daughter was taken away.

This story is particularly compelling in Leos being ready to go against everyone to protect – like a Lion or Lioness would their cubs.

But there are other aspects to consider.

Leos with Ceres enjoy being admired and praised and love to gather the love back in the same way they show it.

Compared to other manifestations of Ceres, Leos love to be treated like royalty by gathering attention and admiration.

Leo natives emit positive energy through their passions, acts, and attention, and you can be sure to feel loved and appreciated in their company.

They can be excellent role models while boosting your confidence, but they expect the same treatment back.

It is valid to emphasize that their love and care are not fake or the only gateway to getting that love back, but rather a cohesive exchange of appreciation.

They live by what goes around, comes around, and they do everything in their power to be generous and show how warm-hearted people they are.

Ceres in Leos is a glorious example of self-assurance and independence.

And while you might feel like the world is not at your disposal, Leos make sure to venture to pass that and pick the bearing fruits of life to their liking.

Leo signs are aware that there is much more to life than suffering and stress, and they wish to enjoy life to the fullest.

Woman with Ceres in Leo

Gender does not matter when it comes to the affection and care Leos have.

When we encounter the position of Ceres in a woman’s natal chart, we meet a woman that is proud, defiant, and confident in her ways.

She’s not the one to take risks because she cannot lose anything.

Not because of her pride but because her affection is associated with her family and children, and Leo woman is ready to teach her children to be proud fighters for whatever comes to them in life.

Ceres in Leos bring out creativity and talent as they explore furthermore where they could put it to good use.

The same thing is shown through her children, as she takes pride in their confidence.

They are warm and gentle but firm when needed, not east to surrender.

Woman with Ceres in Leo is a born leader with a dominant role in her relationship, but she is willing to protect and do everything for her family. Like a true leader of the pack.

Man with Ceres in Leo

There aren’t many changes in male natal charts, as we admire the same characteristics that are boastful in Leos.

Male Ceres can be a great leader and a protector of their family but can also be a best friend to their children.

His family is aware – or should be – of his qualities and energy, along with the love and affection he carries.

Leo men usually show their feelings with gestures and gifts rather than words, but everything they do is to make their family feel special.

They are a definition of self-confident men who are happy with themselves.

Like women, they are great leaders and protectors of the pack.

On a negative note, both women and men Leos with Ceres in their placements can lead to mediocrity when their surroundings are not up to their taste.

Their ego could be bruised if their admiration and love are not reciprocated.

But their disappointment does not result in harm or danger to anybody, as that is never their goal.

Ceres in Leo has powerful energy manifested in various ways.

The ones that stand out are their love and care for others, especially their family and friends.

They require constant admiration, but that is not a tough price to pay after realizing the great qualities they possess and the ways they show them to you.

Love them and appreciate their protection, as you can learn a lot from their ways of thinking and living.

Natal charts are an essential insight to guide you through mysteries in life, just like Leos sometimes take pride in their leadership.

But even though they enjoy your praise, they want others to reach their full potential.

Do not diminish their pride and generosity; you will be rewarded with some of the best people out there!