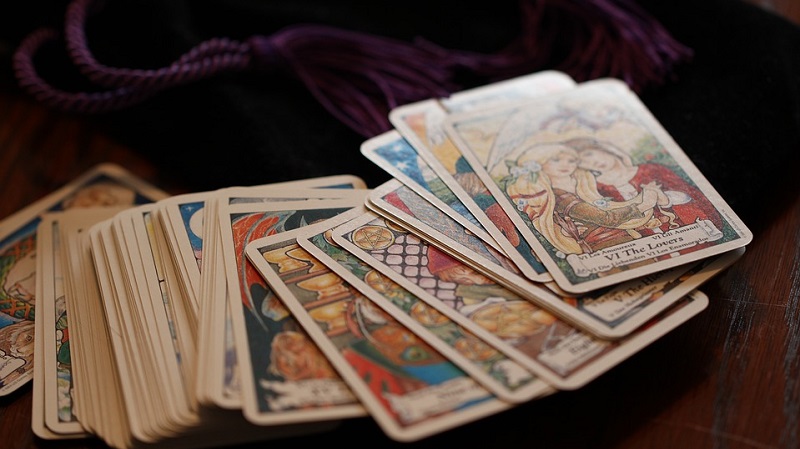 People want to know more about their lives and the future, and tarot cards are just one of the ways to do it.

But unlike so many other things you could read from, tarot cards require a certain knowledge, and you can obtain it just by reading and educating yourself.

The simplest way of reading it includes a depiction of the Celtic Cross.

It is easier as it contains only 10 cards, and the basic rule for reading them is the attempt to find out what it says on the picture.

It is also recommended to include your institution while you do it.

But, from one side of the story, this is not good, if you are a believer you do not have anything to do with any form of “seeing” or reading the future, not in any way.

So, it can be seen as dangerous, but if you are doing it just for fun, for the process of entertainment, and you know that life is much more than seeing the cards, then it is more or less ok.

Are Tarot Cards Safe or Dangerous?

Tarot cards are a form of occultism that is popular with superstitions and people who do not believe in God.

No true Christian will dare to go to someone to look at his tarot cards, because he is aware of the danger lurking in them and that it is not Christian.

Tarot cards are used to tell people about the future or to see the past and people go to people who look at these cards to find out what awaits them and to see if someone is working on them in the sense that the card is under some kind of black magic.

More precisely, there is no difference between black and white magic, it’s all black magic and blasphemy.

A man should trust in god the father who created us like everything on this planet and in the universe and not in the cards that will be interpreted for us by someone who is an idolater of Satan.

In this way, a person can draw into his home or, God forbid, into himself, demons that will torment him and his family and loved ones, and these cards should always be avoided and people who deal with this type of occultism should be avoided.

There are even shows on television where people report live to the program, where a tarot interpreter predicts their fate and past and advises them on what they should do, to get out of their financial and health problems.

It is unclear if a person asks the tarot card interpreter, what will happen to his health and how long, and how he will live.

It is even worse when someone who is engaged in this occult activity comes to your home and starts opening cards, he can open the gates of hell and let a demon into your home, which will supposedly have a bad effect on you and ruin your life and lead you to sin.

If you have allowed yourself to do something like this, you should contact the church and the clergy who will help you get out of this without consequences if at all possible.

Our destiny is in the hands of our creator and we should trust only him and the church because it will only bring us good and because it propagates true spiritual values and principles that cannot harm a person but help him to become a better person and to be spiritually stronger.

Tarot can only harm you in various ways and avoid it because both it and the people who deal with it are dangerous.

Divination, soothsaying, fortune-telling, and witchcraft is something that is not Christian and that does not come from God the Father, but from the fallen angels of darkness who want to separate us from God so that they can take possession of our body and get our soul for themselves.

If he is a true Christian, he is aware that his life is in the hands of God the Father and that everything that happens to him is destined.

He will not allow someone to play with his destiny with any cards and black magic that can ruin his life and poison his soul.

Black magic exists and you should beware of people who deal with it and never willingly allow them to approach you and make you fall in love out of mere curiosity.

When something goes wrong in a person’s life and bad luck follows him, it often occurs to him that someone else is responsible for it and that he wants to punish him for casting black magic on him or harming him in some similar way, and then he tries to find out who is doing him wrong by going to a person who deals with tarot.

Unaware that they will cause even greater misery and difficulties in life.

A Christian will first think about what is wrong with him and where he went wrong and what he did wrong to whom so that it comes back to him badly.

You should often go to church and pray to God and live according to his commandments, fast and pray to ward off unclean forces and people who practice black magic.

Tarot is practiced by people who are good at communication and who can very easily get you to try to solve your problems that way for a certain amount of money.

They are very cunning and intelligent and sweet-talking and their victims are most often people who are pliable and prone to manipulation.

Just as a bully will never pounce on someone stronger than him, so a tarot master will choose his victim based on her intelligence and morals.

The Tarot master knows that he will not have success with a man who is a sincere believer, and that is why he will not even try anything with him because he is aware that he will only be wasting his time.

His victims are people who are sinful and weak-minded, and they are his real target.

These people are most often not aware of the danger that is hidden behind all that and what are the intentions of such people and believe us, they are not good at all.

While looking at the tarot, a special portal opens through which the information that is important to you and that you want to know will flow, and if it is not closed in the right way, your spiritual energy will be sucked out and the spirits will devour it to feed themselves.

After that, you will feel nervous and exhausted and you will be prone to influence dark forces.

You can develop various mental illnesses because your aura will be weak and your brain frequency will be adjusted so that you will be prone to further manipulation.

This is something that the tarot master uses to finish you off and suck out the last inch of energy and the last dinar in your pocket.

In this way, you are damaged both spiritually and materially, because you allowed yourself to be nothing but deceived.

But before that, through you, the tarot master will try to reach other people to whom he will offer his services.

When you run out of money, they will tell you that they will not charge you for the session if you persuade someone else to come and have their tarot cards read, and thus a vicious circle is created from which there is no return.

It is a kind of manipulative sect whose goal is to have as many followers as possible who will be dependent on it in many ways and who will contribute to it daily.

In every culture on earth, there are a few people who engage in this type of fraud, because there will always be someone suitable for it.

As long as there are people who believe that tarot will help them in any way, there will be tarot masters.

When people understand what it is actually about and what price they have to pay, they will disappear too.

The biggest problem is that a person does not know what price he is paying because this “master” will look at his tarot.

It’s not the money the victim gave him, the money is just his reward because he managed to talk someone into agreeing to something like this.

The main commission is given to the spirits of darkness, which is our life energy.

That’s the price we pay when we approach this act and you have to be aware of that.

When a man goes to church and prays to God for health and happiness, he will be energetic and in a good mood afterward because he gave his soul what it needs, and after the tarot, the man will realize that he was a victim, but then maybe be late.

If you have already become a victim of a tarot scam, you should go to church and talk to a priest who is familiar with such situations and who will give you advice on how to proceed to break free from the clutches of evil to which you have voluntarily surrendered.

Only god can help you save your soul to continue your life normally after this.

That’s why you should be careful who you trust and associate with in order not to be drawn into such satanic rites, which is what tarot reading is.

But, if you can be a strong person to know that your life is ruled by faith, not only in God then you know that we can create and fulfill our destiny and that what is important is the process of learning along the way, and not looking into the given answers.