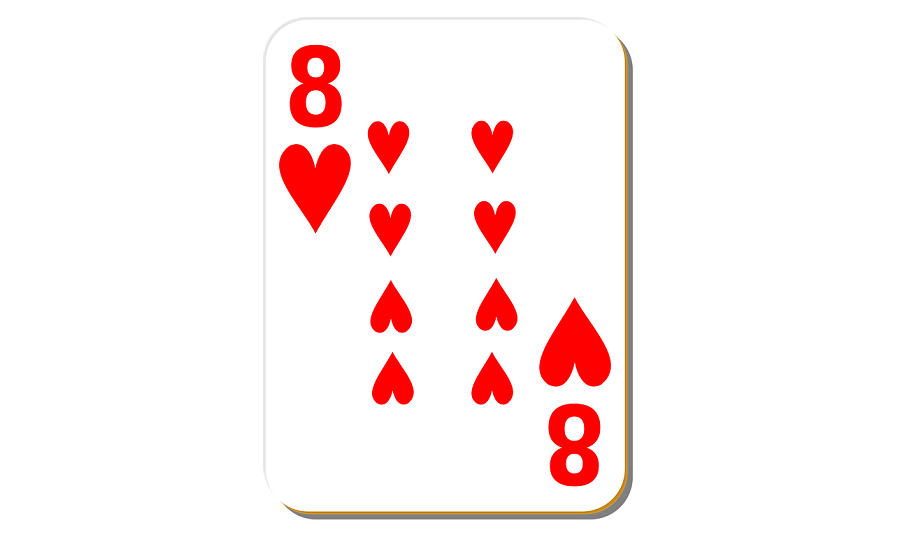 Cards have been with us for centuries, but we still don’t know who made them and when.

The first known records of cards come from China in the 10th century.

Cards appeared in Europe at the end of 13th century and the beginning of the 14th century in Italy and Spain.

They were not easy to afford at first because they were hand made and hand painted.

They were an object of luxury. At first, they were only used for card games, but later they became a fortune telling tool as well.

Its negative traits can be lack of creativity and imagination, repressed emotions, unrealistic hopes and thoughts, excessive emotionality, lack of passion, problems to express feelings, etc.

Those with birth cards in this suit are usually sensitive and emotional.

Their actions are motivated by their heart and emotions and they often ignore the warnings of their mind.

For these people it is important to control their emotional reactions and think before they act to avoid getting hurt or experiencing some other damage.

8 cards also symbolize limitations, situations that are difficult to resolve, as well as boundaries.

They also represent situations and limitations that should be resolved.

8 of Hearts Card – Meaning and Symbolism

The 8 of hearts is a card representing the power of love and punishment for misusing this power and trying to control and manipulate others through their love.

This card speaks about the need to control and face ones fears of abandonment and loss which are at the base of such behavior.

The lesson with this card is learning to trust that only good can happen once love is openly expressed without expecting anything in return.

8 of Hearts people are capable and powerful personalities.

They also have good fortune which helps them achieve all their goals.

Their success relies solely on their will, for if they decide, they must be successful.

These people are spiritually aware and often possess healing powers.

They sincerely love people and selflessly help them in their needs.

They are loved and admired by other people for these gifts.

Some of them have a tendency of controlling and dominating people they love and manipulating them through feelings of guilt or withholding acknowledgment and affection.

Love and relationships are very important to these people and they often have an idealistic view of them.

This is why they are prone to disappointments when their ideals are not met in the way they imagine.

8 of hearts are successful in every area they choose because of their great minds and willingness to work hard.

They are good as teachers to others because they know how to transfer their knowledge to others.

They usually don’t worry about money because they know they can make it if they put in the necessary effort.

They need to avoid feelings of fear and learn how to neutralize them should they appear.

If they manage to do that, there’s nothing these people aren’t able to achieve in their lives when they decide to do so.

The 8 of hearts has a strong urge to control and dominate their loved ones, and it is important to immerse themselves into love and relationships and try to suppress these urges because they stem from fear (of loss, abandonment, etc.).

Until they find the right person, these people might be prone to change many partners and going through various romantic experiences.

Through this process they usually get hurt or they hurt other people.

They usually need to put in some sweat to earn their money, but most of them are financially protected and secured throughout their lives.

They might not be rich, but they always have more than they need. And this is enough for them.

For those 8 of hearts who are ambitious and want to become successful in their profession, success is guaranteed.

These people are graceful. They earn other people’s lives through their love and personal qualities.

Their charm and charisma attract and keeps people in their lives.

These people can bring harmony and happiness in people’s lives, but they can also cause conflicts and disagreements if they choose to act from a selfish and self-absorbed point of view.

They are sociable and love being around people. People find them interesting and fun company.

They have many friends who usually adore them and are happy to have them in their lives.

Their personality is somewhat difficult because they aren’t as tolerant to differences, but people are tolerant to this trait because of their other plentiful qualities.

Because they are natural healers, they often choose a profession in the health field which brings them success and financial satisfaction.

Many of them are very religious as well and often possess some spiritual powers and heightened intuition.

Their domination in the field of love is something they need to pay a lot of attention to.

They might hurt others with their controlling behavior and cause the opposite of what they want.

They might subconsciously act controlling and dominating towards their loved ones to ensure their presence, but at the same time their actions are scaring these people away making them leave which is exactly the thing 8 of hearts fear.

Many of them are artists and performers.

It is essential for them to make time to rest and fill their batteries, because they have a tendency to overwork and overwhelm themselves with duties.

They usually become successful after their 35th birthday.

Because of their magnetism and charisma these people might be prone to prove their worth through attracting and dating as many partners as possible.

Their emotional power is enormous, but they need to make sure not to smother others with it.

They prefer being the leader in their lives rather than being guided by others (partners, spouses, etc.).

For women this might mean finding a partner with a weaker personality who will be willing to adapt to their dominant personality.

Women 8 of hearts should control their behavior not to scare potential suitors with their forceful attitude.

They are usually the leader in their relationships regardless of their gender.

Some of 8 of hearts might express aggressive behavior towards their partners, but also people in general, which is especially worrying if the 8 of hearts is a woman.

8 of Hearts Card in Tarot and Cartomancy

8 of hearts in a card reading is both a bad and a good sign.

It is a sign that the client is undergoing some difficult times, is hurt and is emotionally suffering, but it also indicates that they have finally decided to let go of a situation and/or a person and are moving on with their lives.

The 8 of hearts indicates leaving a difficult situation behind.

This is something that has disappointed and hurt the person and has lasted for some time during which the person has experienced feelings of being left out and abandoned.

Often the situation is also related to circumstances such as betrayal and deception.

This card appearing is a sign that the person has undergone an emotional turmoil and has had enough of it and is ready to move on with their life.

The circumstances can be related to a relationship, a job, career, living space, friendship, etc.

The person has been putting in a lot of effort in some situation without any result and now they want to put everything behind and remove themselves completely.

This situation is likely something that has brought a lot of happiness to the person and now it has become only a source of pain.

This card indicates emotional investment in a situation above all, which is why the pain is so great.

The 8 of hearts indicates situations that have caused disappointment and didn’t turn out as expected.

This card in a spread is a sign to the client to give up on a situation that has been a problem for a long time and dedicate their time to healing.

8 of hearts a card that reminds us to leave everything and everyone that is no longer emotionally fulfilling us.

In some cases, 8 of hearts indicates a problematic emotional situation that needs to be avoided and escaped from.

It can also indicate feelings and repressed emotions related to the past that are draining the person and they are still refusing to get rid of them.

This card is a sign that the process of moving on has begun or it might be a sign to the person to start with the process.

The unfavorable situation is keeping the person stuck in the past and it is essential for them to move on.

When the 8 of hearts appears reversed in the spread this can mean having second thoughts about leaving a difficult situation behind.

This card in a reversed position could reveal the struggle the client has about a disappointing situation where they are evaluating whether to move on with their lives or give it one last chance.

When this card is reversed it is usually a sign that the person is still not ready to leave some circumstances despite the fact that they are destroying their lives and causing them pain.

When the 8 of hearts is reversed in a card reading, the client should ask themselves about the emotional struggle they are going through and begin the process of preparation to leave it behind for their own good.

More Destiny Cards to Discover: 7 of Hearts | 6 of Hearts