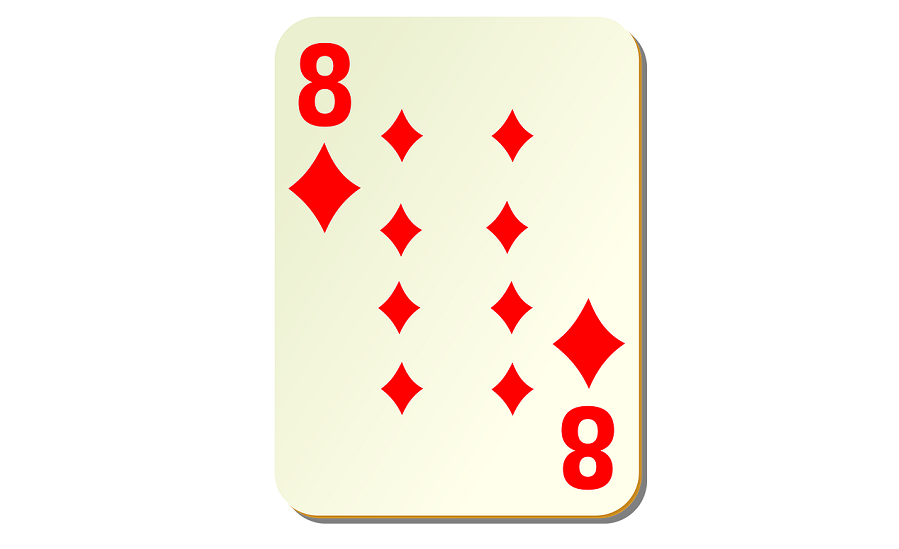 Cards’ history is centuries long, but we don’t know how long it actually is.

The general belief is that they originated in China and were first created in the 10th century.

They arrived in Europe most likely around the 14th century, possibly earlier, probably brought by traders to Italy or Spain.

They were unattainable to the majorities at first because they were expensive to make.

The first decks were luxuriously hand-painted and richly decorated.

During time, cheaper ways of their production were created, and more people were able to have cards in their possession so their spreading around Europe and the world started.

The diamonds suit uses a symbol that was used as a symbol of diamonds since ancient times.

Accordingly, to the icon which represents it, the suit of diamonds symbolizes wealth, income, increase, worth, value, finances, turning desires into matter.

Those who have birth card from the suit of diamonds are usually mostly focused on their finances.

If the focus creates imbalance in their life because they neglect other important areas of their life, this creates situations in their life where they learn the importance of harmony and prioritizing.

They also need to learn not to equal their value and self-worth with the amount of money and possessions they have.

They also symbolize boundaries, limitations, and different situations that cannot easily be resolved.

Sometimes they indicate situations or some boundaries that need to be surpassed.

8 of Diamonds Card – Meaning and Symbolism

8 of Diamonds card symbolizes harmonizing the desire for financial security and expansion with other important areas of our life.

This card speaks about how opportunities and expansion arrive in abundance once balance is established in all areas of our life, material, and non-material.

On the other side, if the focus is only on the material, this causes boundaries and restrictions which prevent us from attaining the material and causing stress and disappointment.

8 of Diamonds people are freedom-loving and independent.

These people are usually successful because they have the ability to achieve whatever they put their mind into.

Sometimes these people can act domineering towards others.

They can be bossy and possess leader qualities.

Usually, they end up in some authoritative position where they express these traits, although they might exhibit such behavior in their other relationships.

There are two ends to their personalities.

They might be spendthrifts and very generous, and on the other side they might be cheap and stingy.

They are reliable and people trust them.

They often turned to by people for advice regarding their property and money.

People often trust them with their money because they have faith in their honesty.

People 8 of diamonds can be stubborn and not easy to deal with.

They don’t like anyone imposing them opinions or advice.

It is important for these people to learn tolerance and treating people with respect from a young age, otherwise they might become tyrannical and mistreat people.

Their mind is focused on finding ways to raise their income as well as their status.

Often, their sense of stability and self-value depends on how much money they make.

They also love to be surrounded by people of higher status.

Sometimes they become overwhelmed with stress of keeping up with the rich.

Sooner or later, they will reach a stage in life when they will no longer have fears about money but getting there can be very tough for some of them.

These people are usually very ambitious and most of them manage to achieve the goals they set themselves.

They are often very financially successful.

Many successful businessmen have the 8 of diamonds as their birth card.

They often end up in a position of power and influence.

Building a secure and strong foundation for the future is one of their main goals in life.

These people are usually blessed with fortunate opportunities which they manage to use.

They know the importance of knowledge, so they make sure to gain as much as possible.

They are often teaching others about the things they have mastered.

They enjoy exchanging their knowledge with other people because everyone learns in such interactions.

8 of diamonds people usually have a joyful nature and love being around people.

They also have strong connections with women, and often have many benefits from these connections.

In many cases, 8 of diamonds people are given the opportunity to succeed a lot during their lifetime.

They also love getting the attention.

They should beware of becoming overly dominating and controlling other people.

Many of them might appear pushy and manipulating people into doing what they want.

These traits might diminish the fine sides of their personality.

8 of Diamonds is very persistent and knows how to get what they want.

They are a good negotiator and can persuade people to decide in their favor.

Even though things come to them with relative ease, these people are not afraid of hard work and are not lazy at all.

They earn their blessings in most cases, although sometimes they do fall into their laps without them moving a finger.

Even though their nature is materialistic, and they are mainly focused on the visible reality, it is important for them to develop their spiritual side, and work on broadening their spiritual insights.

Their intuition is powerful, and they should train themselves to listen to it more.

Their inner voice is a great ally and gives them valuable insights and messages they need to follow to achieve success they want.

They often have a problematic love life because they can be inconsistent.

It is hard for them to choose the right mate.

They often end up siting in two chairs because they need change and variety.

They often avoid getting married.

When they find a partner, who understands and supports their uniqueness they become loyal and devoted without the need to look for satisfaction elsewhere.

The soul card of 8 of diamonds is the Queen of Spades.

This gives them the traits of protectiveness and taking care of those they love, as well as those who need.

They are someone others rely on during times of difficulty.

They have the power to support and encourage others to follow their dreams or overcome their obstacles.

Some of 8 of diamonds people have some important lessons of responsibility during their early life.

This can have two kinds of consequences, it can either lead the person into developing a strong sense of responsibility, or it can lead the person to become irresponsible.

In general, their nature is hard-working and independent.

They easily overcome the difficulties they encounter, but they don’t have patience with ignorant people and people who focus on insignificant matters and keep talking about them.

8 of diamond people don’t want to waste their time and prefer meaningful conversations where all participants share their insights and learn new things.

To others, these people might appear overly energetic and sometimes aggressive.

Even though they often appear inconsiderate and unemotional, these people are nurturing and protective, and they sincerely care for other people.

They also need to love others and be loved by them.

Because they are so independent, they cannot stand others trying to control them in any way.

This can sometimes go to extremes because they ignore valuable advice and suggestions from other people.

This often happens because of their strong ego which doesn’t allow them to accept that they are not always right and they don’t always know everything.

Such attitude can often cause problems, when they choose to stick to the wrong choices and experiencing bad things, instead of accepting the fact that someone else is right and their ideas about a situation are better.

Some Eight of diamonds people are prone to overspending.

This is extremely dangerous, especially if they are not financially accomplished yet.

It is important for them to learn the right attitude towards money, and the importance of balanced spending.

The worst case is when they are spending to compensate some anxieties, they have in their life instead of facing them directly.

8 of Diamonds Card in Tarot and Cartomancy

Eight of diamonds is not considered a strong card in cartomancy and tarot.

This card has a good meaning but isn’t so strong to annul the negative effects of other cards in the spread. It might signify some pleasant daily event.

This card is often related to your finances or profession.

Other cards in the spread give additional details about the nature of these events.

When the other cards in the spread have a good nature, the 8 of diamonds could indicate good news regarding finances, or your financial situation slowly improving.

This card can sometimes be a sign of some fortunate circumstances and doesn’t always have to be related to money.

Sometimes it could indicate someone you know getting good news about money, or receiving small amount of money, etc.

When the 8 of diamonds is surrounded by cards from the Diamonds suit, this can indicate financial difficulties.

It might be a warning against spending, and reminds the client to be cautious about how they spend their money in the upcoming days.

If the client is having a love reading, the 8 of diamonds card appearing in a spread can indicate an intellectual connection that exists between them and the person they are interested in.

The 8 of diamonds in a reading can sometimes be a sign of delay regarding some situation the client is interested in.

It might be something they have awaited long time, but the card can indicate that some work is needed to achieve the result.

In this case, this is a message to the client not to be impatient and wait for the right moment to take action.

Maybe some other circumstances need to fall into place, so the Universe is asking the client to trust things are unfolding in the right direction, and just wait.