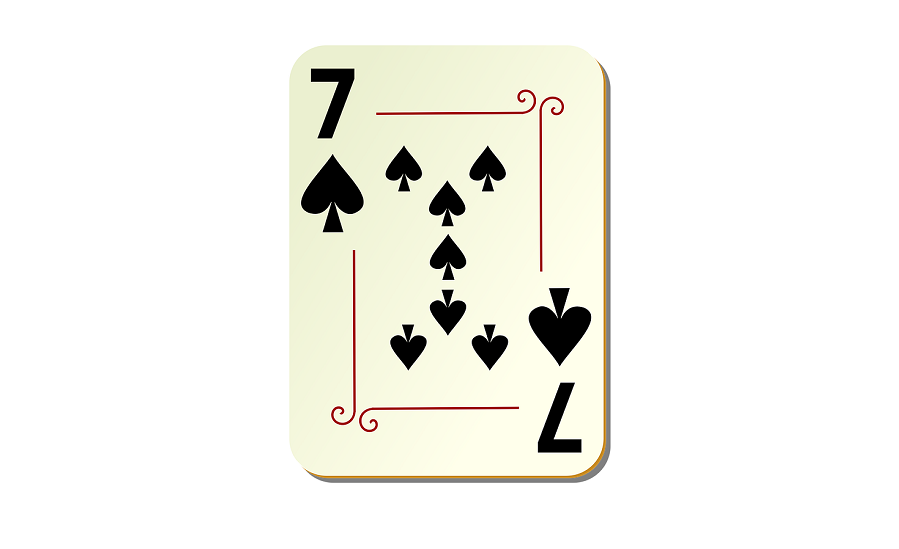 The history of cards is long; it is believed that they originated in China around the 1000s.

There aren’t any actual proofs for this belief, but it is certain that they first appeared in Europe around 1400s.

The first European decks were created in Italy; they were hand painted and richly decorated.

This meant they were an item of luxury therefore they weren’t accessible to the majority of people.

In time, their production got cheaper, and more people could afford possessing a deck of playing cards.

Cards begun spreading throughout Europe, in countries such as Germany, France, England, USA.

These countries added their influence to the overall look of the modern card deck which is in use today.

The spade icon is a depiction of leaf, hence the symbolism of earth and life related to this suit.

The word comes from the Italian term for sword, or “spada”.

People who resonate with the spade suit are usually very active and always on the move.

They engage in different activities, especially physical. They are into sports.

The spade personality is also spiritual and devotes a major part of their life to developing their spirituality, as well as fulfilling the needs of their soul.

Cards with numeral value 7 symbolize the process of structure, evolution, and manifestation.

These cards are a symbol of law and order, balance, wisdom, progress, fortune, achievements, etc.

The 7 is a card of unexpectedly getting what we want.

It is the wish fulfilment when we least expect it.

People who have 7 as their card are considered old souls.

7 of Spades Card – Meaning and Symbolism

The 7 of spades card means improving wisdom and self-mastery.

It is a card of a mystic and spiritual seeker.

It is also a symbol of financial trouble and discontent.

It often indicates deception and betrayal, as well as illusions and confusion.

The 7 of Spades personality are often born leaders and have powerful personalities.

These people are usually considered lucky especially with their finances.

They are also charming and easily make contacts with people.

They are romantic and cannot be alone for long.

These people have a desire to work undercover.

They don’t want to openly expose themselves and their actions and they tend to work behind the scenes.

They tend not to show their true face in public.

Only people who know them well have the privilege to know details about their lives.

In many cases, these traits lead these people towards a career in secret services or some undercover work.

They are great observers and able to see things other wouldn’t notice.

They also have the gift of uncovering the truth and unveiling lies.

At the same time, these people can be excellent liars, who can remain forever undiscovered.

People who are seven of spades have a friendly nature, and usually have many friends.

They enjoy helping and serving others.

They also enjoy transferring their knowledge and wisdom to others.

They don’t easily attach romantically and when they do, they remain faithful to their partners.

These people are aware that their actions have consequences and are usually very aware of their behavior.

They are aware of the law of cause and effect and know that they will be forced to pay for their mistakes, so they tend not to make them.

People who are seven of spades are usually good at learning new things as well as talking and expressing their knowledge.

They are also good team players and good working in partnerships.

They achieve great success by teaming up with others, especially people they trust.

These people are good as executives, negotiators, and agents.

They are usually serious and detest shallow people.

They want to spend their time in the company of people they can learn something from.

The 7 of spades personality usually chooses an older partner who can give them the stability and safety they crave for.

They are loyal partners and respect their relationships.

These people often separate their private lives and business.

In general, these people are good with dealing with other people’s money.

In many cases these people work for charities and humanitarian organizations.

They don’t like to expose their actions and are content by helping others without anyone knowing about that.

They might experience health issues due to worrying too much and stressing over their work.

It is important to them to keep their stress levels low and occupy their minds and time with activities which relax them and keep them calm.

For the 7 of spade person the most important action in life is the discovery of their spiritual side and its development.

When they realize the power, which is stored within them, they become unstoppable.

They have a great gift of introspection but also of observing others.

They intuitively know what others think and feel.

These traits can make them great as writers and psychologists.

Their desire for adventure drives these people to travel frequently.

They enjoy traveling, alone and in company, and their personality makes them an excellent travel companion.

The seven of spade soul card is the king of diamonds.

This card gives the seven of spades person the gift of leadership and desire to be successful and exceed others.

7 of Spades Card in Tarot and Cartomancy

The seven of spades card doesn’t have such a good reputation in card readings.

The seven of spades appearing in a reading spread is usually considered a warning.

The 7 of spades card can indicate possibility of being schemed or mentally manipulated.

This card often indicates someone in our surroundings who is only pretending to be a friend with good intentions.

This card is a sign of sneaky business and the other cards surrounding it can give more clue about the possible culprit.

The 7 of spades card can also indicate getting away with something sneaky.

It doesn’t always have to indicate someone is doing us wrong, and instead, it can point out to our own behavior.

This card appearing in a spread can also indicate the need to be witty and adaptable in some situation.

In worst cases, this card appearing in a spread can indicate a possible the person could experience, such as theft, frauds, or some other kind of deceptive situations.

It is a sign o warning in any case, and attention is required on behalf of the client in the upcoming days.

Sometimes this can indicate the client’s intentions on doing something wrong and sneaky.

Maybe the worst publicity of the 7 of spades card is related to love readings.

When the 7 of spades appears in a love reading, both the client and the reader are worried.

The main reason for the worry is the fact that this card can often be a sign of cheating and betrayal, and in most cases the person who is having their cards read is the one being cheated on.

To put it simple: no one wants to see the 7 of spades in their love spread.

The card is in most cases linked to cases of infidelity, acting behind the person’s back, lies, and similar behavior.

The 7 of spades card can also be a sign of mental manipulation where the client is trying to mentally manipulate someone or some situation, or they are experiencing the same from someone else.

The 7 of spades card doesn’t always signify third party situations but is in general a sign of sneaky and shady matters.

For people who are single, and this card appears in their spread, it can mean that they might meet someone deceptive and sneaky in the near future, or the card might indicate someone from their past who betrayed them or was in some other way dishonest towards them.

For some this card could reveal their personality and game playing attitude in relationships.

In readings regarding busines and career the appearance of 7 of spades is also a warning sign. It might indicate the person could possibly experience some trickery and betrayal at work.

Maybe someone is working behind their back or undermine their reputation, and the client should be alert about that possibility.

This situation might be unfolding in front of the client’s eyes and they might not be aware of it.

Of course, the card can also be pointing out the client’s behavior in some busines situation where the client is trying to manipulate a situation in order to get away with something or gain something.

It is vital to be warry whenever signing documents or important contracts or making important decisions when this card appears because it might indicate problems that can arise in the future, due to unforeseen circumstances, usually having to do with some deception.

This card warns the client to avoid taking risky actions and decisions.

In some cases, the 7 of spades could indicate the person encountering false gurus and teachers who might mislead the person and drive them to the wrong path.

If the 7 of spade card appears in your spread, and you are interested in spiritual evolvement, it is important to listen to your gut feelings about people who are selling their knowledge to you.

More Destiny Cards to Discover: 5 of Spades | 6 of Spades