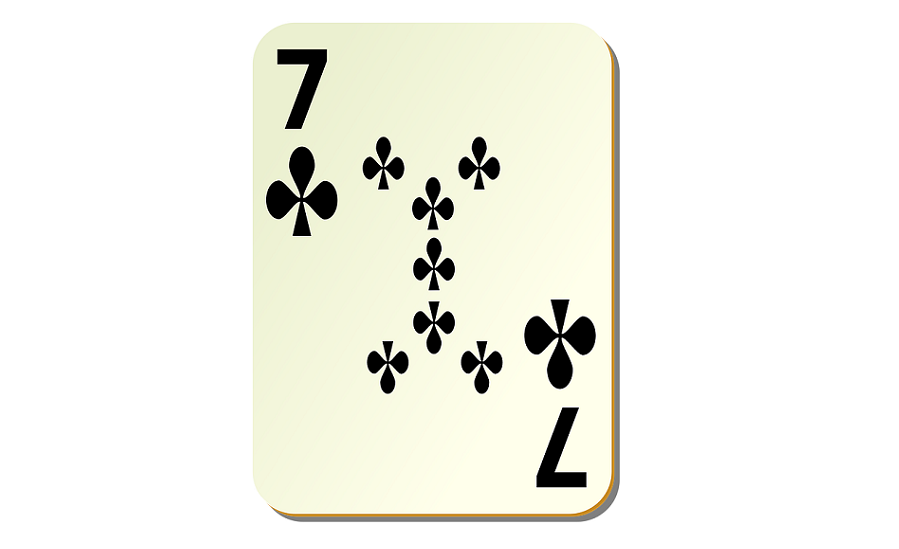 The first card deck was created a long time ago.

It is not certain when and where this happened, but the general belief is that the Chinese created cards in the 10th century AD.

From China, cards were spread throughout Asia, from where they arrived in Europe, possibly Italy or Spain at first.

Cards were a luxury item and only the rich could own them.

They were hand-painted, and this required time and money.

When their production started being cheaper and less time-consuming, other people were able to possess them as well.

The suit of clubs is a symbol of determination and action.

People whose birth cards fall in the clubs suit are determined and energetic.

These people are attractive and passionate.

They have a strong drive and ambition to succeed in life and achieve their goals.

They are charming and others find them attractive, but they can also be egotistical and self-absorbed.

They symbolize wish fulfilment and earned rewards, especially finally getting something when the hope is gone.

7 of Clubs Card – Meaning and Symbolism

7 of clubs represents achievement of goals through effort and work.

This card indicates getting the rewards for your ambition, determination, hard work and desire to succeed.

It indicates that hard work and effort pays off in the end.

7 of Clubs people, like all people with a card that has numerical value 7 are old souls.

These people are highly spiritual and intuitive.

They seem to “know things” without reasonable explanation.

One of the main goals in their life is expanding this gift.

Many of them are unaware of their abilities and it takes time for them to get used to listening to their inner guidance.

By doing so, they help not only themselves, but also the people around them.

These people usually have money and don’t have a problem earning it, but they can be prone to money worries and risky investments which can cause them financial losses.

It is important to learn how to control these fears and have faith that they are well provided and taken care.

When they rely on their intuition when making investments and financial decisions, they never make mistakes.

For the 7 of clubs person, education and knowledge are very important.

They are aware of their importance in achievements of their goals and pay a lot of attention to their studies.

Their minds are sensitive and always full of different thoughts, which often makes them overwhelmed.

It is important not to allow their negative thoughts and worries possess their mind because they might attract the exact thing, they are worried about.

They are prone to worrying about things that are not likely to ever happen, and that is a major issue in their lives.

One of the best things they could do to keep their mind and thoughts under control is establish a practice of calming their minds through meditation and mindful thinking.

It is essential for them to understand the power of their mind and realize how much it can help or destroy their life.

Many of them seek salvation and peace through religion, and this is also a good thing.

For some of these people experiences such as close people (usually coworkers) stabbing them in the back or scandals might be a part of their lives eventually.

This can cause a lot of mental pressure for these people.

They should pay close attention to the people they associate with, especially at work because some of them might have unclear and bad intentions towards them.

Also, these people should also be careful about the people they choose to befriend or spend time with because they might experience deceit or disappointments through such relations.

In general, the 7 of clubs people are successful, especially those who invest in their education and development of their spiritual gifts.

When they manage to do that, they become invincible.

No one can take advantage of them when they are using their powerful intuitive powers to see through their intentions.

Often these people can be stubborn, and no one can influence them in changing their opinion, even when this is in their best interest.

If this is the case, they should learn to become more flexible and tolerant to other people’s views and accept them if they have interest for that.

There is no use to sticking to a point o view that is not serving you good.

Sometimes this stubbornness appears as competitiveness.

They have a problem cooperating with people and want everyone to follow their rules.

They don’t make compromises and often end up in debates and conflicts with others.

This creates problems at work and they are not considered as a good team-player.

Sometimes it appears that they simply need to take the other side in an argument just for the sake of not conforming, even though they don’t have any benefit from such attitude.

This behavior can be detrimental for them, especially if it appears at work because it will diminish their chances for success and advancement.

Some of 7 of clubs people are lavish spenders and they want to have the best.

The problem is that they often don’t have the means to provide such a lifestyle.

They often spend way beyond their means.

These people often inherit money or marry into wealth.

Still, this doesn’t ensure their financial security, because they are capable of spending it all and ending up broke.

For this reason, it is essential for them to learn how to properly spend money and become more organized with their expenses.

These people often struggle with pessimism, worries, and depression.

It is important to learn how to become more optimistic and handle these negative emotions which can keep their mood low and prevent their accomplishments and making the most of their abilities.

They can also suffer from confidence issues and doubt their abilities.

They need to become aware of the danger such thoughts and feelings could provoke and create chaos in their lives.

The sad thing is that they often do before these people realize that they need to take charge of their thoughts and control them.

Optimism and happiness is the key and they need to find a way to keep themselves happy and optimistic.

This usually causes them to embrace their spirituality and often these issues end when that happens.

For the seven of clubs marriage is a way of calming their character and they often choose to commit.

They are romantic souls, and this can in some cases lead to promiscuity and deception.

This can lead to multiple breakups and divorces, still these people prefer being in a relationship rather than being on their own.

Not all 7 of clubs are deceivers, many of them are devoted and loyal spouses.

Some of them grow through their romantic experiences and learn to respect and appreciate a committed lasting relationship with one partner.

They might be prone to mood swings and this can cause lot of problems with other people.

In one second they might be enthusiastic and overwhelmed with joy, and in moments this can change to depression and sadness.

This often happens without any reason, which is why it is important to learn controlling their mood and feelings.

7 of Clubs Card in Tarot and Cartomancy

In tarot and cartomancy, the 7 of clubs can have various meanings, depending on the reader.

Some readers consider this card an indication of anxiety regarding your love life.

It might refer to some love issues the client is experiencing, but there is no resolution to them in the near future.

The 7 of clubs can indicate doubts and uncertainty.

Maybe the client needs to make some choices or decisions (often related to their love life) and they don’t know which way to choose.

They might be afraid of this decision and its effects on their life.

This card can be a sign of sad and depressed feelings because of some loss.

It can also indicate feeling pressured by others who want to take advantage of the person or take their place.

Maybe someone at work is plotting to undermine the client’s reputation and steal their position.

The 7 of clubs reveals feelings of tension and expectation of attack or loss.

Maybe the client is feeling pressured to prove themselves and their value faced with fierce competition and people who are trying to take their place.

Often this card indicates that the person is surrounded by people who are jealous at their success and are doing what they can to ruin them.

7 of clubs often reveals the constant struggle of the client to prove their worth and attacks from people who want to see them fall.

When the 7 of clubs appears in a reading it can represent a warning to the client to pay attention to the people from their surroundings and possible haters who might somehow jeopardize them.

Sometimes the cards surrounding the 7 of clubs can give a closer description of the person or people who might play such a role in the client’s life.

It might indicate the need to fight to keep your position.

This card can sometimes indicate obstacles to the success of some project or endeavor, caused by external factors.

When the 7 of clubs is reversed, this can indicate external factors causing the client to lose faith in their abilities.

It indicates worries and doubts caused by other people.

Sometimes it is a sign of being overwhelmed with many duties and responsibilities which keep you under stress.

More Destiny Cards to Discover: 5 of Clubs | 6 of Clubs