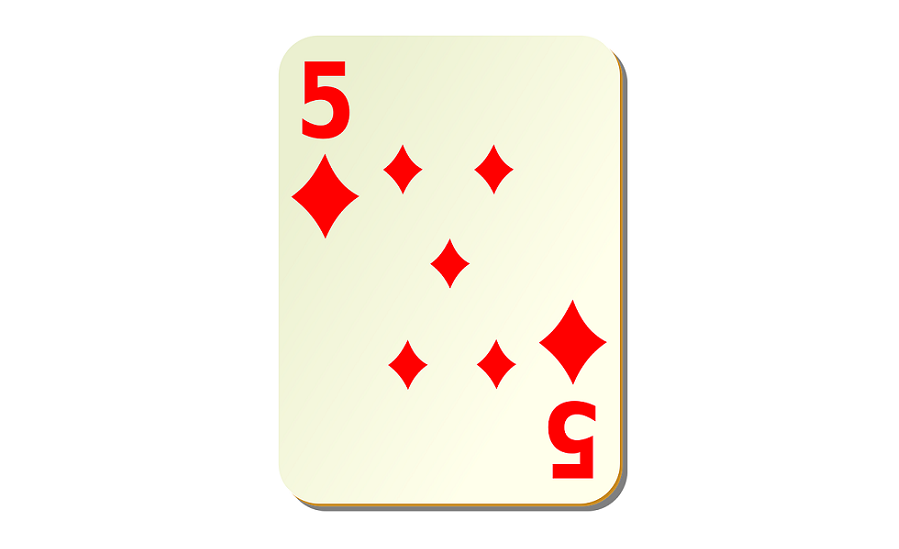 We know cards have centuries long history, but their exact country and time of origin is not certain.

It is most likely that they originated in China in the 9th century, from where they were brought to Europe.

First records of cards in Europe are from the 13th century.

Most likely they first appeared in Italy or Spain.

Because they were expensive to make, were hand-painted and a true object of luxury, they were available to a small group of people at first.

As their production became cheaper, more people were able to acquire them.

The suit of diamonds uses an icon that was a symbol for diamond since antiquity.

This suit is a symbol of worth, wealth, increase, finances, income, value, turning thoughts to matter, etc.

People who are influenced by this suit usually focus on their wellbeing and financial stability, so they try their best to obtain it.

Cards with value 5 are symbol of obstacles and difficulties appearing on our path.

They are a sign of imperfection, disappointments, resistance, resentment, etc. It indicates damage and conflicts, or something unknown.

Sometimes these cards symbolize separation, or they symbolize unions.

These cards appearing in a spread can indicate the need to accept the imperfection and imbalance of life as its normal part.

5 of Diamonds Card – Meaning and Symbolism

Five of diamonds indicates changes related to our wellbeing and finances.

It might indicate increase and growth, but also disappointments, loss, and unnecessary financial risks.

The 5 of Diamonds people have adventurous and freedom loving nature.

Their personality is independent, and they are suffocated by any kind of restriction.

They often consider their parents strict because they weren’t able to accept the rules of their early upbringing.

Despite this perception, their parents, especially their mother have an important role in instilling the right principles they tend to stick to throughout their life.

They begin to value this later in life.

The 5 of diamonds person could be considered a perfectionist because they have a lot of attention to details.

This trait might also stem from their inner sense of insecurity and lack of confidence in their abilities, which disappears in time.

These people are very intelligent and don’t want to waste their time talking to people who are not inspiring to them.

If they don’t have similar topics to discuss with someone, they become disinterested in hanging around that person.

Some of them might be egotistical and have a high opinion of themselves and very rigid in the choice of their friends.

It is important for them to listen to advice of people who are more experienced in some areas, especially related to their work.

Their feeling that they are always right might be a big obstacle to them.

They can be preoccupied with their work and this might affect their health.

They should avoid overworking and stressing themselves over work.

They need to find time to rest and delegate their duties to people who are capable of doing them.

Their need for control might be a burden that gives them a lot of pressure.

They must learn to give up control over different situations and people in their life because trying to control everything might hurt them.

The Five of Diamonds have a lot of qualities and they can become very successful later in life.

They often experience some kind of public recognition.

Their success grows as they learn to listen to their intuition.

The 5 of diamonds are good at working as a part of a group.

It often happens that their career is somehow related to a foreign country.

Some of them might move abroad to do their job.

They love to travel, and they usually travel much, especially in the second part of their life.

If life was somehow unjust to them when they were younger, it usually happens that life somehow repays them for that.

In general, they don’t have financial struggles, but they might have periods of difficulties in earning and keeping money.

These people often end up in secret affairs they need to keep hidden from everyone.

They often need to take care of their family members and they do it with joy.

They are not at all selfish when it comes to being of help to those they love.

They have a carrying and nurturing nature that appears in times of need.

They might even be put into situations where they need to give up on something very important to them for the sake of a loved one.

The Five of diamonds person pays attention to their spending.

They don’t overspend because they love the security of having a full bank account.

They are cautious and plan things ahead.

They also value their privacy and want others to respect it.

They might experience health issues as a result of a negative mindset and a tendency to worry a lot.

They need to work on developing their optimism and faith that things will work out in their favor.

They don’t like routine jobs and any kind of restrictions.

If they have a job that suffocates them and makes them feel imprisoned, this might really damage them.

It is important to maintain flexibility and some amount of freedom at their workspace, and if this isn’t possible, they become angry and resentful.

Being their own boss could be the best solution for their independent nature.

They need a job that will provide them both with financial security and give them the opportunity to express their creative nature.

A good choice is a job related with travel.

Sometimes these people experience situations where they are being used and taken advantage of by close family members and friends.

They work diligently to provide themselves a financial security and others might find them an easy target because of their caring and giving nature.

Life might give them some important lessons through their trait of giving to others selflessly.

They have an independent nature which causes them to look for partners with similar traits.

5 of Diamonds Card in Tarot and Cartomancy

Five of diamonds is not a card with good reputation in tarot and cartomancy.

It is a sign of financial loss, lack, isolation, worries, mindset of poverty and lack, and similar matters.

There is better meaning when it is placed reversed in the spread in which case it could mean a recovery from a financial loss, or any kind of loss.

When the 5 of diamonds appears in a spread, it can indicate some tough times coming regarding the client’s finances.

This card might mean problems at work and career.

It might be related with the way the person earns for their living.

This might indicate losing a job or losing financial security in some other way.

The person might feel very insecure because they don’t have an income, they can rely upon anymore.

Luckily, even though the meaning of this card is not good, it has a temporary effect, and the situation, no matter how bad it is, won’t last long.

The five of diamonds might indicate losing self-esteem and confidence, feeling alone and isolated.

Maybe it is a sign of a breakup that is coming, or the person has already experiencing a breakup and they feel alone and rejected.

They might feel as if no one cares about them.

Sometimes this card appears in a spread as a reminder from the Universe to the client to change their mindset about money and abundance.

Maybe they only focus on what they don’t have and forget to be grateful for the things they possess.

Thinking about lack only brings them more lack, and they need to be aware of the consequences of their negative thinking.

A good advice for them is to make a habit of expressing gratitude for all the good they are experiencing, or others are doing for them, as well as for all the blessings the Universe has blessed them with.

In some cases, the 5 of diamonds might reveal the fear the person has about being rejected or abandoned by someone.

This might also indicate a fear of losing something.

When this card appears reversed in a spread, it might indicate a change of situation and things improving.