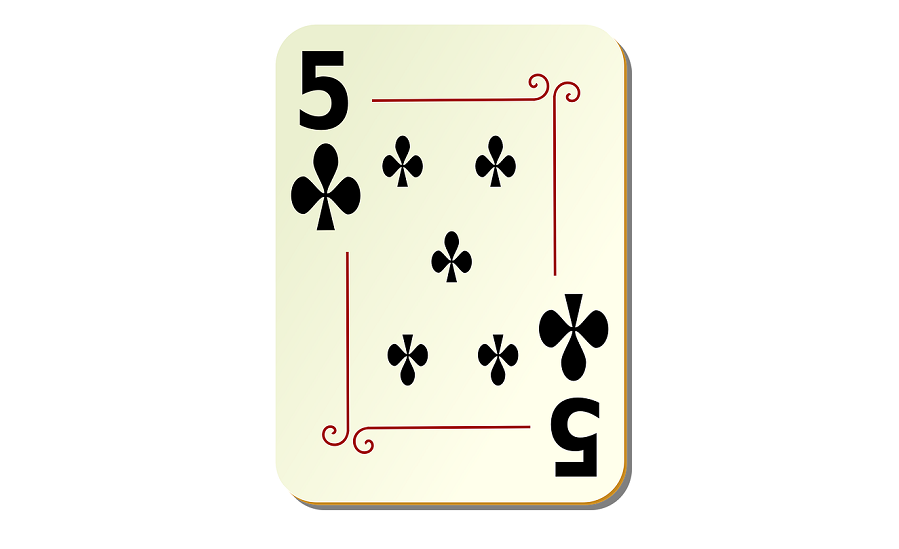 Cards are used for playing different games, but can also be used to foretell the future, and describe someone’s personality.

They were first created as a gaming tool, and later people began using cards for other purposes.

It is not known where they were created at first.

Also, the exact time is unknown.

The general belief is that the Chinese created them first in the 10th century.

From there, cards spread across Asia, and arrived in Europe, by the end of 13th or beginning of 14th century.

Because they were expensive to make, only the rich could have them.

As their production became cheaper, cards became more affordable for the masses.

The clubs suit is a symbol of creativity, energy, ambition, determination, passion, unpredictability, spirituality and strength.

People who are born under a card from the clubs suit are energetic and usually very passionate.

Action and success motivate them. these people are attractive and charming.

They are optimistic and enthusiastic but many of them might also be self-consumed and egotistical.

They are a sign of trouble, obstacles, and difficulties we encounter along the way.

They often represent something unknown.

Number 5 cards are a sign of unions or separation because they symbolize contradiction.

In a spread, cards with this number usually signify the need of accepting the imbalances and imperfections of life as its integral part.

5 of Clubs Card – Meaning and Symbolism

The meaning of the 5 of clubs card is mostly related to adventure and changes.

It is a card with transformative nature, and symbolizes learning and improving through experiences, often of negative nature.

This card symbolizes new experiences and travel that broaden the person’s horizons.

The 5 of clubs symbolizes financial risks and success or failure as a result of taking risks.

5 of Clubs people are fond of making changes and broadening their experiences.

They love to learn and usually learn through experiences and travel.

They cannot stand still, their nature is restless and wandering.

The 5 of clubs person is in love with traveling and cannot stand any kind of monotony and routine.

They need to move constantly.

They are often very impulsive and thoughtless which jeopardizes them and can cause damage, often of financial nature.

They might experience sudden gains and losses, due to their risky nature.

It is hard for them to listen to advice because they are too stubborn and impulsive.

These people often learn things the hard way, through their own experiences.

They need to learn to control their impulsiveness and become more thoughtful and organized.

It is advisable they make plans before acting.

5 of clubs person is curious and wants to know all the latest trends.

These people are creative and possess many talents.

They love to learn and are often very educated which enables their success in life.

Expanding their knowledge about people and other matters is what motivates them.

They can be secretive in their private life, as well as in the relationship with their partners.

They might hide things and never open up completely to their partner.

Many of them marry for the sake of having children but end up abandoning the marriage because they don’t have enough freedom.

They don’t have a problem divorcing their spouses.

Their nature is changeable which causes a lot of changes in their relationship life.

They often have problems settling down. 5 of clubs people might be prone to having secret and extramarital affairs.

They often avoid getting married because they don’t want to lose their freedom.

Lack of freedom is often the cause of their relationship breakups and tendency of choosing open-type relationships with extremely flexible partners who can tolerate their restless nature.

The 5 of clubs card often indicates financial issues, which often stem from the person’s childhood.

People whose birth card is the 5 of clubs, might have experienced financial struggles early in life which caused a feeling of fear regarding finances.

They might fear not having enough and fears of spending which will ruin their financial stability.

They might have a problem making financial decisions, and some might act opposite and take unnecessary risks which lead them to financial ruin.

Some of them might be prone to gambling which can also lead to their financial detriment.

It is important for them to develop a sense of confidence in their ability to make money and always make the right financial decisions and choices.

They need to erase all existing fears regarding money.

The 5 of clubs also need to learn that others might have some excellent advice for them and listen to them once in a while.

There is a note of mystery related to these people.

They don’t want to reveal anything about their personal lives even to their closest people.

Sometimes this trait is a result of previous bad experiences with people, and possible betrayals and jealousy these people encountered.

In general, there might be a tendency to hide their feelings and blocking themselves from opening up to people, which they need to work on changing.

5 of clubs people are usually religious but they have their own perception on spirituality and religion.

They are interested in developing their spiritual side and actively work on expanding their knowledge on the subject.

Many of them begin their spiritual quest in the later stages of their life.

These people are not humanitarians by nature, but they never refuse helping others and they often offer their help.

They do it selflessly and without expecting anything in return.

The 5 of clubs personality has a nature of a nomad.

They are prone to changing places of residence and living in different countries.

Interactions with strangers and foreign cultures is something that brings a lot of joy to them.

They are excellent communicators and good with people, so they can be excellent in sales and trade.

The main problem of this person is their inability to stick to one thing and changing the object of their attention often.

This trait often deprives them from succeeding in the chosen areas.

These people are very sociable, and people adore being in their presence.

They love socializing and meeting new people, but they often have commitment problems which prevents them from establishing and maintaining lasting friendships with people.

They are not very reliable and often change the object of their interest which is a trait that cannot be tolerated in friendships.

They don’t want to invest themselves much and this is why many of them don’t have many or any real friends but only casual acquaintances.

5 of Clubs Card in Tarot and Cartomancy

When the 5 of clubs card appears in a card spread this can be a good or a bad sign, depending on the reader.

For some readers, this card is a sign of success, especially if it is placed next to a card from the diamonds suit.

Some readers see the 5 of clubs as a sign of success of current projects or a romantic encounter that will fill the person with happiness.

On the other side, some readers find the 5 of clubs card very unhappy.

For them, this card is a sign of changes and conflict.

This card indicates competition and tension, as well as obstacles which prevent progress.

This card can be a sign of inability to be heard or resolve conflicts with other.

It indicates misunderstandings which cause anger and resentment.

When 5 of clubs is present in a reading that might be an announcement of upcoming conflicts or it might describe them as currently happening.

This card is a reminder to the client to be more open to listening to what others have to say as well as accepting their point of view.

This doesn’t mean that the client should accept their opinion if they don’t agree with them, but simply express their respect and allow others to be different and see things differently without trying to impose their opinions on them.

This is the key to resolving all conflicts.

When the behavior of conflicting sides is respectful and tolerant, they can easily come to agreements and even decide to acknowledge the other side’s point of view.

The 5 of clubs in a card spread might also be a sign of the client’s defensive nature and behavior in some situation.

It reminds the person to be tolerant to differences and uniqueness of any person.

It can indicate building trust and resolving conflicts which doesn’t serve good to anyone.

If the 5 of clubs is reversed in the reading, this can indicate internal conflicts that are unfolding inside the client’s personality.

Maybe they need to make an important decision about something, and they cannot decide which way to take.

The decision might refer to professional or private issues, such as quitting a job, accepting a promotion, ending a relationship, ending a marriage, having an abortion, moving abroad, etc.

This card reversed might indicate the struggle of the client to make an important decision because of the pressure from their surroundings who have opposing opinions about the issues that are bothering the client.

Sometimes when the 5 of clubs is reversed in a card spread, it can indicate the client’s reluctancy to enter a conflict with someone.

It might indicate resisting the temptation to enter a conflict or debate about something.

More Destiny Cards to Discover: 3 of Clubs | 4 of Clubs