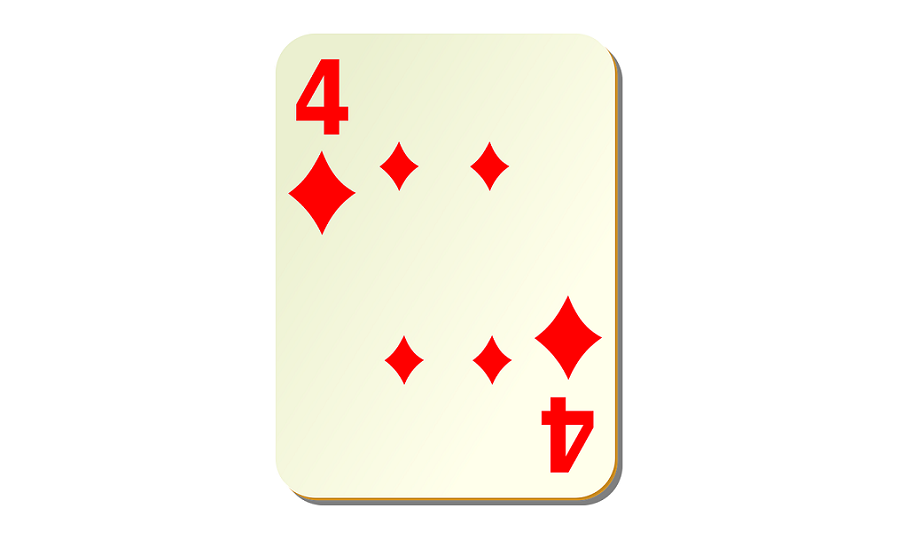 Cards have a long and interesting history.

It is not known for sure where the first cards were made, but many believe this country was China.

The first decks were believed to have been created in the 1000s.

From Asia, these decks traveled to Europe through merchants most likely.

The first European countries where cards were first brought in the 14th century were Italy and Spain.

The cards of these days were a luxury item, hand-painted and richly decorated.

Their production was expensive and not many people could afford owning a deck of cards.

As this changed, cards begun spreading all across Europe and the world.

Diamonds suit has an icon that was used since ancient times to depict diamonds.

The name and symbol of this suit refers to its main symbolism.

Those influenced by this suit are usually focused on their financial wellbeing and stability and put in a lot of effort to obtain and maintain it.

Cards that have the value 4 are a sign of consistency and stability.

This might be something good or something bad, depending on the situation and circumstances.

Because it is a sign of constancy and immutability, it might imply boredom, stagnation, fearing the unknown, avoidance of change, and similar things.

The 4 also indicates stability and groundedness.

People whose birth card has the value 4 might be very consistent and grounded, but also hesitant to make changes in life.

They might be overly attaching to situations and people.

They are responsible and reliable.

In a card reading, the appearance of a card 4 usually signifies that things will remain the same in the near future.

4 of Diamonds Card – Meaning and Symbolism

The Four of Diamonds is considered an indication of good fortune and luck when there is effort to provide them.

If there is a lack of effort to accumulate and achieve success, this card can indicate poverty, lack, and failure.

This card might be a sign of disappointments related to work, or frequent changes in this field.

Their work is a cause of many frustrations.

This card often indicates selfishness, keeping things to themselves, being closed off, etc.

The 4 of Diamonds personality needs to put in a lot of effort to get their financial rewards.

Their rewards will certainly come if they actively pursue them.

These people are not born lucky and they need to fight for everything they have.

Things usually don’t fall in their lap and they need to sweat to get them.

In general, these people are sociable and love being around people.

They have many friends and enjoy spending time with them. sometimes they can be overly idealistic when it comes to ideas concerning love.

They can experience long periods of stagnation and inability to change their circumstances, in their professional or their love life.

They need to accept this dynamic of their life and overcome it with putting in more effort and arming themselves with patience.

They often deal with money or have some major responsibilities regarding money.

Taking care of money in some way is what the 4 of Diamonds often do.

They are good at managing a business because of their organized and responsible nature.

They set their goals precisely and go after them.

They don’t change things that are working good in their life.

The Four of Diamonds person is usually not afraid to put in effort into achieving their goals because they know the reward awaits them.

These people are usually good at making the right choices.

4 of diamonds people love to keep their mind and body occupied and they are happiest when they have a lot of work.

4 of Diamonds people love to be financially secured and don’t mind working to achieve that.

In most cases, however, they don’t manage to achieve financial security before the middle of their life.

Success never comes instantly to these people. It always requires patience and time.

But these people are persevering, and they know how to wait for their rewards.

These people might have a complicated pattern in their romantic life.

They might have a lot of requirements for their ideal partner, causing them to experience romantic disappointments and relationship breakups.

They often have more than one marriage.

They usually don’t have a problem in attracting their partners, but the problem arises when they need to maintain the relationship.

They might start looking for the negative sides of the contact rather than seeing its good sides, which in the end creates obstacles and breaks the relationship.

They have the patience to maintain a relationship, but their idealistic creations keep making them feel insecure about their choices.

Some of these people might attract abusive relationships and partners who try to take advantage of them.

They can put up with a lot, but at the end they are forced to leave such connections to save their health.

The problem is that they tend to repeat this pattern of abusive relationships until they discover the root of their need for such relationships.

When they manage to heal, this usually breaks this pattern.

Some of them don’t manage to do this, and they spend their life in resentment and bitterness.

4 of Diamonds Card in Tarot and Cartomancy

The 4 of diamonds card symbolizes patience needed to win a reward.

This card indicates the effort required to find a treasure or earn enough money.

It speaks about patience and effort paying off at the end.

When the 4 of diamonds card appears upright in a spread, it indicates saving money, being closed off, security, being in control, lack, etc.

When the card is reversed it might indicate spending too much, being greedy, etc.

This card can indicate feeling insecure about your financial security, experiencing the need to save money or restrict all your spending because you don’t know what lies in the future.

It might be an indication of changing circumstances that will require to reevaluate your spending priorities and cut some expenses because you will need the money for other purposes.

When the 4 of diamonds appears in a spread, it might be a sign from the Universe to the client to reconsider the way they spend and invest their money.

It might reveal the fears the client has about money or the issues with overspending.

When surrounded with good cards, the 4 od diamonds could indicate achieving financial security by saving money and careful spending.

It often indicates a cautious approach towards money due to fears of lack.

Sometimes it can be a warning to the client from the Universe to pay attention to the way they are spending their money because they might jeopardize their financial security and end up broke.

This card often reveals limiting beliefs of the person regarding abundance and wealth.

The person might have a mindset of scarcity and belief that there’s never enough money and they need to work hard to earn it.

This usually ends up as a self-fulfilling prophesy and can be a sign from the Universe to change this mindset because it is hurting the client and making their life miserable.

The person might be depriving themselves and their loved ones of all the pleasures in life, including the most basic ones.

This card is often an indication of the person always choosing the safest way in every situation and refusing to take any risks, not just regarding their finances, but as a general rule of their behavior.

4 of diamonds need to find a way to balance their urge for safety and allowing themselves to relax and simply enjoy life.

When the 4 of Diamonds card appears in a reading, it might indicate that the person’s focus is on money and fears related to money.

It might indicate an overly attachment to material possessions.

The person might relate their personal value with the amount of wealth they are able to accumulate.

This card might be a reminder to the person to focus more on equally important things in life that they might have been neglecting, such as their family, friends, and self-development.

The 4 of diamonds might appear when the person wants to let go of control over some area of their life.

Maybe at work they are being overly controlling not allowing others to influence their work in any way.

They might also behave in this manner in their relationships, where they are overly controlling and not letting their partner have their saying about anything.

This card might also indicate being possessive in a relationship and even expressing jealousy towards the partner.

This card also indicates having a strict attitude or being inflexible in some situation, and such behavior is only hurting the person.

Resisting the inevitable change can sometimes damage the person’s health because they cling to a situation or person even though they know that it is over and the only thing they could do is move on with their life.

When the Four of diamonds appears reversed in a spread, this might be a sign that the person is evaluating their spending and realizing that there are more important things in life than running after money.

This can be an indication that the person is turning their attention to other priorities in life.

When reversed, this card can also indicate spending more than earning.