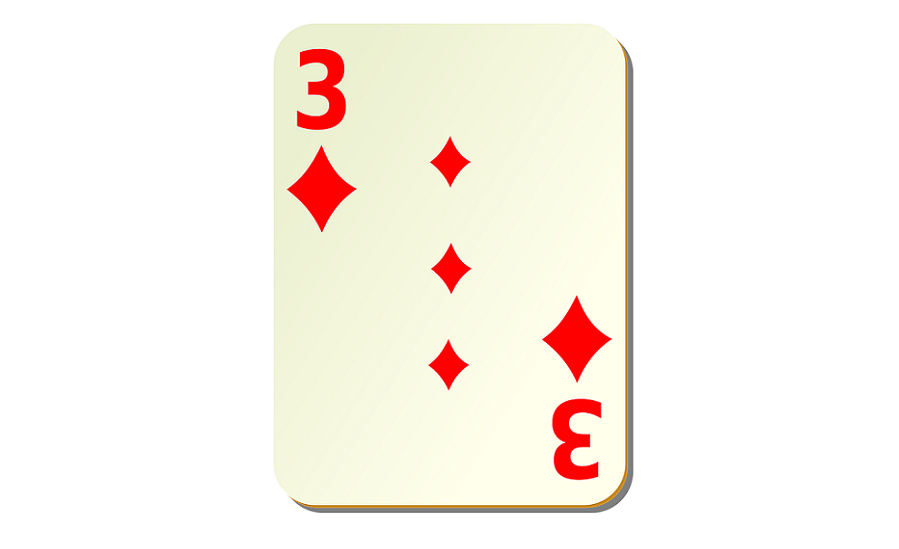 Nowadays it is almost impossible to imagine a world without cards, but cards had a origin is not certain, and it is believed that they were first made in China, some 10 centuries ago.

From Asia, cards were brought to Europe where they were used to amuse the rich.

This happened around the 14th century.

At first, they were almost unattainable because of their price.

Cards were a luxurious item, richly decorated, and hand-painted.

When their production became cheaper, they became available to the masses.

The modern suits as we know them today (diamonds, clubs, hearts, spades) were created by the French.

The French also divided the suits in the colors red and black.

Diamonds are suits related to money and financial issues.

The icon depicting this suit was a symbol used for diamonds since antiquity.

Those who have a card from the diamonds suit as their birth card are usually very concerned about their financial wellbeing and most of their attention is focused on attaining it.

Many of them have a materialistic overview on the world, and it takes time to discover their spiritual side.

Cards with 3 value symbolize the merging of two into a third part.

Besides symbolizing creation, the 3 also symbolizes its opposite, destruction.

These cards have a masculine and giving nature.

3 of Diamonds Card – Meaning and Symbolism

The 3 of Diamonds symbolizes creation, especially in the professional field and business.

It also symbolizes work and our office, our colleagues, good relations with them or issues we might experience with them.

3 of Diamonds personalities are usually creative and have the need to express themselves in an artistic or creative manner.

They need change and variety; these people cannot stand routine and boredom.

They usually do what they want, and they don’t care much what others think about their behavior.

Many might consider these people inconsiderate, but they don’t care.

These people often tend to express their value through making money.

Many of them need to prove themselves that they are capable of earning enough to provide themselves and the ones they care for.

This enough varies from person to person, but it is certain that their sense of self-esteem is related to their bank account and number of possessions they own.

They need security, but they also need their freedom and independence.

They don’t like any kind of restrictions which is why they choose professions that can provide them the financial security they crave for, but also with enough flexibility and freedom.

Many of them are prone to taking risks in order to make money.

These people might be prone to inconsistent behavior, confusion, messiness, and indecisiveness, which often stands in the way of their success.

They have all that it takes to be successful, and they shouldn’t let their nature and lack of self-control stand in the way of their goals.

If they manage to suppress their negative urges and traits, their success is guaranteed.

The 3 of Diamonds people often manage to succeed in accomplishing their biggest dream of doing the job they enjoy and earning enough to explore the world, or even better, exploring the world through their job while earning enough to feel safe and satisfied.

When they are put inside a controlling and strict environment, where they are obliged to follow hundreds of rules, these people feel like they are suffocating.

Many of them don’t have the faith to follow their dreams and end up doing just that their entire lives.

But these are the 3 of Diamonds people that are extremely unhappy.

One of the worst things these people could experience is their freedom being taken away from them.

This trait often creates them problems in their love life, because their need for independence collides with the idea of relationships and togetherness.

Their partners need to be very tolerant.

The 3 of Diamonds person doesn’t want to spend all their free time with their romantic partner.

They want their time alone, in the house, traveling, exploring, and doing all the things they love to do.

Their partners and spouses need to be very understanding of them and have similar characters.

Because of this strong urge for independence and freedom, the 3 of Diamonds person often avoids commitments and marriage and prefers being in open-type relationships.

3 of Diamonds people can also have more than one short-lived marriages.

They can also be promiscuous and have multiple relationships at once.

The 3 of Diamonds is very curious and enjoys meeting new people and experiencing new cultures.

These experiences give the person insights into other cultures and their beliefs, which help them broaden their views, especially on religion.

These people often have some unresolved issues regarding their religion and spirituality, often having to do with the person’s strict religious upbringing.

During their life-time these people usually confront these issues and resolve them, often through some unavoidable life circumstances.

They love working with people.

A career related to travel is one of their preferred ones.

Doing busines with distant countries can bring them good income.

The 3 of Diamonds often experiences some help from a friend related to their career, which helps them generate substantial income.

Some of the 3 of Diamonds people experience situations in life when they need to sacrifice themselves and some parts of their life for others, usually close family members, such as children, or their parents.

Their nature is serving, and they enjoy doing that role.

3 of Diamonds people sometimes experience betrayal and deceit from friends and people who are close.

They might be victims of these people who use them and take advantage of them financially or in some other way. These people should be very careful about who they trust.

These people should work on developing the spiritual side of their nature. This will help them cope with the difficulties and disappointments they encounter in life.

They often have an intuitive gift, but they need to learn to follow it.

3 of Diamonds Card in Tarot and Cartomancy

The 3 of Diamonds card is a career card and represents our work.

When it appears in a spread, it usually points to issues related to work and career. Maybe it indicates a new job opportunity.

The meaning of the card should be determined by also analyzing the other cards in the spread.

The 3 of diamonds can sometimes indicate rewards for the job well done.

It can be a sign of a promotion at work, or a salary rise.

If the client is currently doing a project or they are planning on starting a project, if other cards in the spread confirm that, the 3 of diamonds can indicate successful realization of that project.

This card can sometimes indicate challenging times at work.

This might happen due to some circumstances, or human influence.

The 3 of diamonds can be a sign to the client that they need to put in a lot of effort to achieve success.

Sometimes, the 3 of diamonds indicate receiving less than expected, or receiving a small amount of money.

When the three of diamonds is positioned as the outcome card this can indicate success coming after a lot of struggle, partial success, or small victory.

It might indicate a part-time job or temporary work engagement.

This card can also indicate additional work or freelance work.

When the 3 of diamonds appears in a love reading, it is usually a bad sign, indicating lack of commitment.

This card can describe the partner as someone who is inconsistent, comes and goes out of the client’s life.

This card might indicate someone who is not willing to put in the effort to maintain the relationship, or the client might act in such a manner in their relationship with someone.

The 3 of diamonds speaks about someone with changeable and fickle nature.

The 3 of diamonds in a relationship spread can also be a sign of romantic illusions, deceptions, and third party situations.

Readings about financial questions where the 3 of diamonds appear usually indicate slow growth and progress, and if surrounded by negative cards, this can mean deceptions and fraudulent activities.

The client might be manipulated by someone they know well into making some bad financial decisions which might jeopardize their financial security.

They might also be schemed by someone who takes money from them.