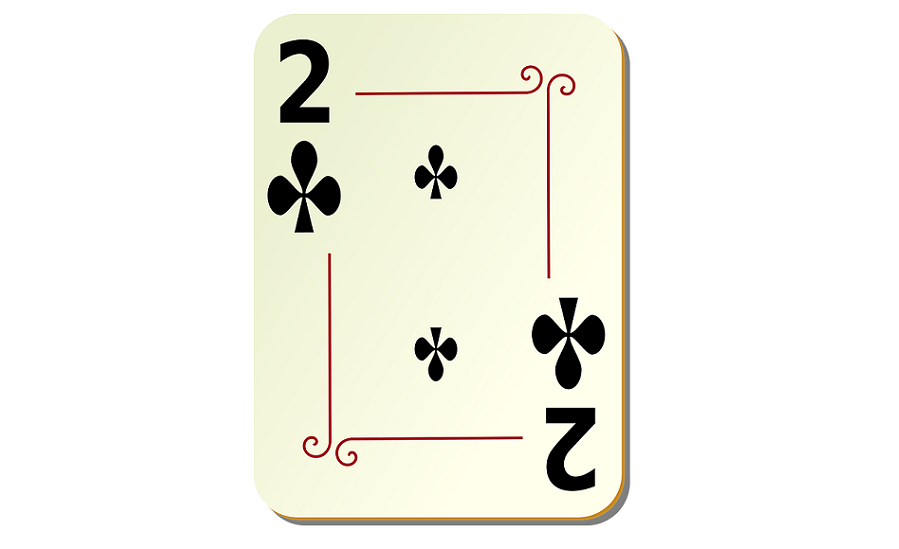 It took a lot of centuries for cards to look the way they do now.

They have a long history, and it is uncertain where they were first created.

Most people believe that they originated in China, somewhere around the 10th century.

They first appeared in Europe around the 14th century, most likely in Spain and Italy.

Because their production was expensive only the rich could possess them at first.

Later, when their production started getting cheaper, they became available to more people and begun spreading around Europe.

Clubs people are energetic and passionate.

They are always prepared for action.

They are charming, enthusiastic, but can also be self-absorbed and egotistical.

They are symbol of relationships and making compromises.

2 of Clubs Card – Meaning and Symbolism

This card symbolizes the principle of opposites, like male and female, mother and father, night and day, action, and consequence.

The 2 of Clubs people are focused on creating unions.

These people are usually very creative and talented.

They create successful business partnerships and are good team players.

One of the major obstacles in their life is tendency towards fear.

Fears might prevent them from achieving their true potential which is a shame.

Many of them have a lifelong struggle with different kinds of fears which prevent them from functioning normally.

Most of the time the fears are completely ungrounded, but the person cannot control them.

When they are not blocked by their fears these people are able to express their true nature, which is kind and gentle.

They don’t like being alone and can be attention seekers.

They often spend time with people just because they don’t want to be alone.

Their sense of self-worth is often related to how others perceive them.

Many of them need other people’s approval of their worth.

They are good looking and attractive, and also very intelligent.

Even though they have the right qualities, their choice of partners is often wrong due to their inner insecurities, fear of loneliness, and feelings of low self-worth.

They often become prey to people who see these weaknesses in them and use them to manipulate, abuse them and take advantage of them in some way, which only continues diminishing their confidence and makes them feel worse than when they were alone.

Their tendency to settle for anyone just to feel the void of loneliness, can be detrimental to their psychical health.

Two of clubs people often have issues with co-dependency and lack of confidence and self-esteem.

These are the major points in their personality they need to work on resolving because they bring them lots of problems.

These traits in most cases stem from lack of self-love and worth these people feel.

They need to learn how to love themselves and things will begin to change in their life.

When their personality changes, and they begin to love themselves more they will stop allowing people who are not a suitable match to them to enter their lives.

They will begin attracting people who are a match to their new mindset.

They will start to be content with being alone and patiently wait for the right person to come.

Two of clubs often attracts very passionate and even aggressive partners, and even though these people might seem attractive to them, they are not a wise choice for the long run because they deplete their energy and make them feel exhausted.

When these people learn to control their negative traits, they can lead a very successful life.

They can be free to use their qualities to improve their life and the lives of others, without the burden of fears and worries.

They are communicative and enjoy in their exchanges with other people.

They love learning new things and expanding their knowledge.

At times they can be impulsive and lack patience, so they use their quick thinking to their detriment instead for their benefit.

They might be prone to thoughtless decisions and actions which only hurt them.

It is important to learn to control their thoughts and actions, and only then they can use completely their talents and qualities.

2 of clubs are creative and talented for different kinds of creative expression.

They can be talented writers, artists, or do some other creative jobs.

If they are persistent and follow their inner drive, they are also financially rewarded for their efforts.

One of their assets is their will to work hard to achieve their goals.

The rewards for their efforts usually come in their mature age.

They often form business partnerships with friends and close people.

Most of these people have an inborn inclination towards cooperation, but some of them will struggle to learn this gift.

They might be overly stubborn and independent and until they learn how this attitude is hurting them, they will experience problems and struggles in their professional as well as their private life.

When they finally discover the beauty of collaboration and making peace with others, they will feel immense satisfaction.

They are usually very logical and practical, and this often stands in the way when they begin accepting some Universal truths and gaining spiritual knowledge.

Many of them possess the gift of uncovering secrets, especially other people’s secrets, and some of them might even use this information for their benefit.

It is essential for these people to evolve spiritually because this will help them in overcoming the limiting beliefs and fears they have.

This action will change their lives for good and make them better people.

Some of them might have control issues and anger episodes.

Learning how to take control over their thoughts will help them control their entire life.

It will help them become more patient, and calm.

It will also help them listen to what others have to say instead of stubbornly trying to impose their opinions onto others.

Self-development is crucial for these people and they should never lose this fact from their minds.

2 of Clubs Card in Tarot and Cartomancy

The 2 of clubs in cartomancy and tarot can sometimes indicate conflict between two people with close ties, such as partners or friends.

This card appearing in a reading spread can indicate some unresolved issue between the client and someone close from their life they need to work on resolving.

Maybe they had an argument with them or something else happened that violated their relationship, and the cards are telling the client that resolution is on the horizon.

The 2 of clubs card can be a sign to the client that they might experience some conflict in the future and warns them to relax and be prepared not to overreact to this conflict and neutralize its effects.

This card can indicate conflicts and arguments with friends and family members and possible reconciliation.

In some cases, the 2 of clubs appears in a reading to remind the client that they shouldn’t pile up resentment about a situation and they should instead talk openly about what is bothering them so they can find a resolution and experience peace.

It teaches the client to communicate their issues and solve their problems in this manner.

For some readers, the two of clubs is a card that speaks about progress, making future plans and decisions.

If the 2 of clubs card is reversed it can indicate having fears of the future, avoiding making plans and postponing action.

When the 2 of clubs appears in a reading it might be an encouragement to the client to begin taking action towards their biggest dreams.

It indicates discovering the right actions one needs to take to get what they want.

It might indicate making careful plans for the future and evaluating the potential consequences of our actions.

This card in a spread is often a sign that the client is still not ready to act and some further planning and organization is required before that.

It is an encouragement that the client is on the right path though.

The 2 of clubs warns that caution is required, and rash and uncontrolled actions and decisions should be avoided.

Sometimes the 2 of clubs indicates that the client needs to make a decision about some situation and decide which path to take.

It can also be an encouragement to take the course they have already decided to take prior the reading.

The Universe is encouraging them to have faith in the intuition that have led them towards choosing that particular path for some future action.

If the 2 of clubs is reversed, this can indicate the person is headed towards a wrong path, and they should reevaluate their decisions and plans.

More Destiny Cards to Discover: 2 of Diamonds | 2 of Spades