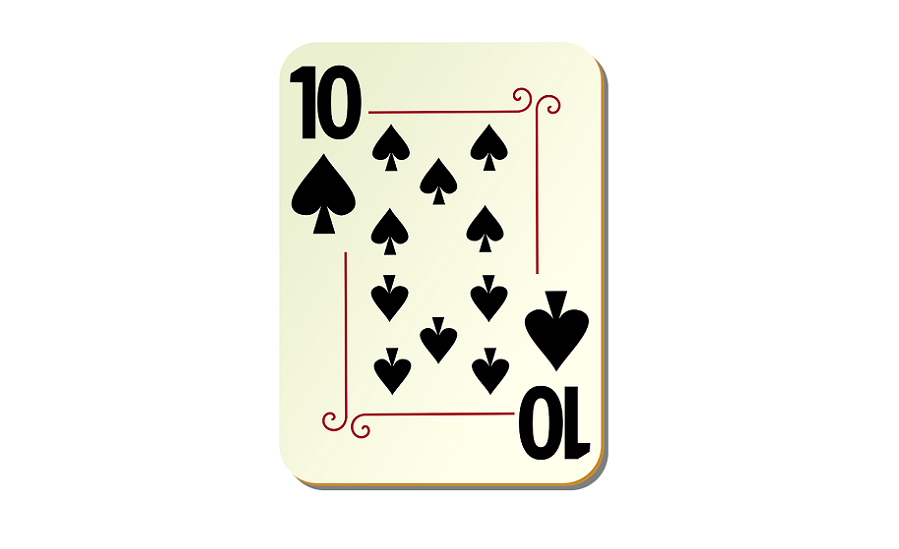 The history of playing and reading cards is long and interesting; it goes long back in time.

Many believe that cards were created in China, during the Song dynasty but proof to that claim don’t exist.

What is certain is that first cards in Europe appeared most likely in Italy, in the 13th century.

These cards were nothing like the cards we know today; they were a luxurious, hand-painted item.

Very few people were able to possess such a luxury.

From our perspective it appears strange, but it took some time until majority of people could have them in their possession.

In time, their production got cheaper, and they begun spreading across Europe, and other continents.

The spade suit got its name from the Italian word “spada” which means sword.

In tarot, this suit is equivalent to the suit of sword.

Those who resonate with the spade suit are usually active and sports types.

They are engaging in different activities.

These people are focused on their work and they feel accomplished as a person through their work success.

They are also very spiritual and work on developing their spirituality.

Cards with the numeric value 10 carry a symbolism of endings but also new beginnings.

They symbolize the circle motion in life, especially when it comes to birth, life, and death.

Everything has a beginning, duration, and ending.

The card with number 10 speaks about new opportunities and change after letting go of the past.

It is a sign of imminent changes which will bring new things, usually good in nature.

10 of Spades Card – Meaning and Symbolism

The 10 of spades symbolizes the end of a process or a phase related to gaining wisdom, work project, physical activity, communication, and other matters symbolized by the spade.

It indicates the beginning of something new after something is finished.

The 10 of Spades people are quick witted and need constant mental stimulation.

Some of them might easily become bored when situations turn stagnant.

They need jobs that are dynamic and keep them on their feet constantly.

The best job for them is one that can leave them enough freedom and movement.

They often combine work and travel and choose travel-related jobs.

They are good at jobs in the entertaining industry and the arts.

They are talented artists and love beauty.

These people often wear their heart on their sleeve.

They are open and give themselves a lot in relationships with others, but their efforts are usually not reciprocated.

In a way these people are emotionally naïve and vulnerable and people can take advantage of these traits.

This indicates that the 10 of spades person needs emotional structure in life and support of their family.

They also need to create emotional stability and be able to provide for their family.

They need the sense of belonging to their family to feel complete.

The 10 of spade person often works to provide for their family members and being able to do this brings them great joy.

Their family is who they turn to whenever they need support of any kind.

The love and support of their family is something they treasure most.

Because they often feel the need and urge to take care of their family, these people need to establish a stable financial base.

Money is one of their major concerns and they don’t hesitate to put a lot of effort into establishing financial stability and stable income.

The 10 of spades person would consider themselves a great failure if they didn’t manage to provide for their family.

They don’t mind sacrificing for the people they love but sometimes it is hard for them to manage everything and that stresses them a lot.

The 10 of spades person is ambitious and has high opinion of themselves.

These people are confident and not afraid to take action to get what they want.

Many of them are very self-absorbed.

These people are good partners and parents.

Their responsible approach towards their family makes them a great and loyal spouse.

They will enjoy taking care of their children.

The 10 of spades has a strong personality.

They have the willpower and the qualities to achieve a lot, especially to accomplish their dreams.

They are determined and enduring, especially when it comes to their obligations.

When the 10 of spades focuses their mind on something, they don’t stop until they finish it.

Sometimes, these people might put their work before their relationships, but solely because they need to provide the means to take care of the people, they have relationships with.

Sometimes these people might be considered workaholics because they don’t seem to know when it is enough work.

Others have a high opinion about them especially because of their work efforts and selfless attitude towards their family.

Even though they might be very focus on earning money, these people are also spiritual beings and spirituality is a major part of their lives.

They use material stuff to improve their lives and the lives of their loved ones, but money is not the only thing that gets them going.

It is true that when things seem to be bad financially, they might begin to worry too much, and this can cause problems in other spheres of their lives.

In some cases, these people could have a tendency to addictive behavior, and it is advisable to avoid any kind of addictions because they will make this person’s life miserable.

They might experience problems when they try to balance their home and professional life.

Their home life will usually suffer and this is very painful for the 10 of spades person who desires to be perfect in all areas of their life.

They need to learn to take things easy and find more time to rest and spend it with their family.

They also need to work on diminishing their existential fears and fears of lack of money.

If they continue fearing they might attract just the thing they are afraid of.

To be able to do this, it is important to have the support of their family, spouse, children, parents, or some other family member.

For many of the 10 of spades people, this will be a difficult task, especially because they need to change some trait, they’ve been building their entire lives.

Many of 10 of spades people have powerful spiritual gifts but many are unaware of that.

When they do begin to awaken, that has a great impact on their lives, and they begin seeing things differently.

They begin realizing the power of their thoughts and actions over their lives and begin to change dramatically.

This is when they realize that fear is their enemy and begin relaxing about the things, they fear the most, lack of money and not being able to take care of their loved ones.

These realizations help them in achieving more success and help them relax at the same time.

They begin realizing their true power and even help other people realize theirs.

The 10 of spades person has a lot of lessons to learn to be able to use their full potential.

As they grow older, they become more productive with less effort and establish better relationships with others.

It is best for them to marry later in life because they need to go through some life experiences that will teach them the importance of having enough time to devote it to a relationship and your partner which is something, they are usually not aware of when they are younger.

It is important for them to have some experience outside their marriage before being able to commit to one person and establish family with them.

Only then they are able to give their best in maintaining these relationships for life.

It is important for the 10 of spades person to learn how to balance their professional and private life before they can do that.

In some cases, the 10 of spades person experiences disappointments in life finding partners who are not willing to commit.

These experiences usually happen to make them realize that their partners only reflect their nature and inability to attach.

This brings a lot of confusion before they are able to realize exactly what they want and need in their love life.

10 of Spades Personality is born on the January 4th and February 2nd.

10 of Spades Card in Tarot and Cartomancy

The 10 of spades has a bad reputation in tarot and cartomancy.

It is a card which usually indicates disappointment and sadness.

It also has attributed meanings such as jealousy and envy.

This card should be interpreted alongside other cards in the spread but in general it ruins the good meaning of other cards.

Good thing about the 10 of spades is that it indicates bad things that are about to end or have ended already.

Sometimes this card indicates the desire of the client to be left alone and forget about someone or something.

It is a sign that a situation or a person should be left behind so a new chapter in life could begin.

The 10 of spades can sometimes be an announcement of something bad happening.

It might not be something of a permanent nature, and it can simply be a passing distress and sadness.

It can indicate the need for isolation and passing illness.

Sometimes it can be a sign of disappointments in love or breakups.

In some cases, the 10 of spades can indicate abrupt endings of projects or other situations.

The ending is not a bad thing per se because it clears the path for new things and people.

More Destiny Cards to Discover: 9 of Spades | 8 of Spades